New outside hitter kills it for the Blue and Gold 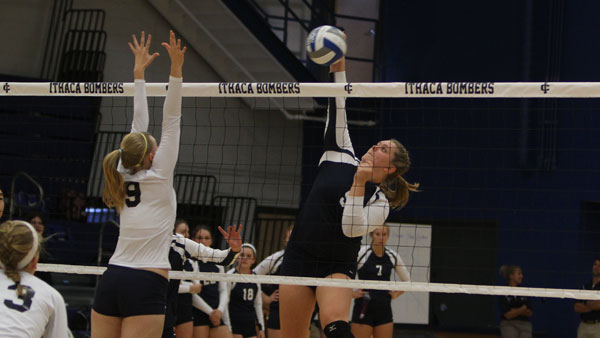 Rylie Bean focuses on the arc of the ball. As a teammate sets it in the air, she follows it with her eyes and moves into position. For a moment, the 1,800-seat Hawk Center of SUNY-New Paltz is silent as Bean pulls back for a strike. A right-handed swing connects with ferocity, and her teammates erupt when the ball ricochets off the court for a score.

The junior middle has joined the volleyball squad as a transfer student from Erie Community College, and she is already making a sizeable impact despite battling through ankle injuries.

At the SUNY-New Paltz Invitational tournament Sept. 13-14, Bean added 32 kills, five digs and four blocks to her total. As a former National Junior College Athletic Association Region III Female Athlete of the Week, the middle hitter said she hopes to use her experience to set an example for younger players.

“I know I want to be someone the girls can look up to, and I will be the best I can for them,” she said.

Bean suffered a left ankle injury on Aug. 31 and played through it to begin the season. Unluckily, she sprained her right ankle in the Mount St. Mary College match on Sept. 13 but continued to play for the duration of the tournament. Head coach Janet Donovan said she appreciates Bean’s toughness as a competitor, but said she will have her sit out a few practices before returning to action later in the week.

Battling injuries on top of adjusting to a new school and joining a new team has made the beginning of the season a bit difficult, but Bean said her teammates have helped her along the way.

“The transition has been a little rocky,” she said. “But the team has been there and is a really great support system.”

Several players stepped up for the Blue and Gold to compensate for Bean missing playing time with her sprained ankle. Freshman outside hitter Shaelynn Schmidt made the All-Tournament team as she tallied 31 kills, 11 digs and four blocks. Senior outside hitter Justine Duryea was a big contributor in the squad’s two wins, contributing 19 kills, 15 digs and four aces. Donovan said she was pleased to see all of her players step up when one of their teammates was playing through an injury.

“It was nice to see Shae, a first-year outside hitter, come in and be able to put up some numbers that Rylie has already done,” she said. “When they both start doing that together and playing well at the same time it’s really going to help us put some W’s in the win column.”

According to Donovan, the team played its best match of the season despite losing to SUNY-New Paltz, a team that made it to the quarterfinals of the NCAA Division III championship tournament last season. The South Hill squad also played tough against No. 21–ranked Salisbury University as it trailed each set by an average of six points. Sophomore setter Carly Garone said one of the strengths of the team is its ability to motivate others when teammates struggle.

“We have a lot of depth to our team,” she said. “There isn’t just one starting line-up. Everyone is interchangeable, and we have a lot of talent in all positions.”

With the team a little banged up, it will take this week to heal and prepare for its next slate of games at Hartwick College. The list of injured players includes Bean, freshman outside hitter Grace Chang and freshman defensive specialist Maggie Mutschler. Donovan said she’s excited for what the team is capable of once it bounces back and becomes healthy.

“We’re going to just take games one match at a time, and hopefully get everyone out there on solid ankles and do our best,” Donovan said.