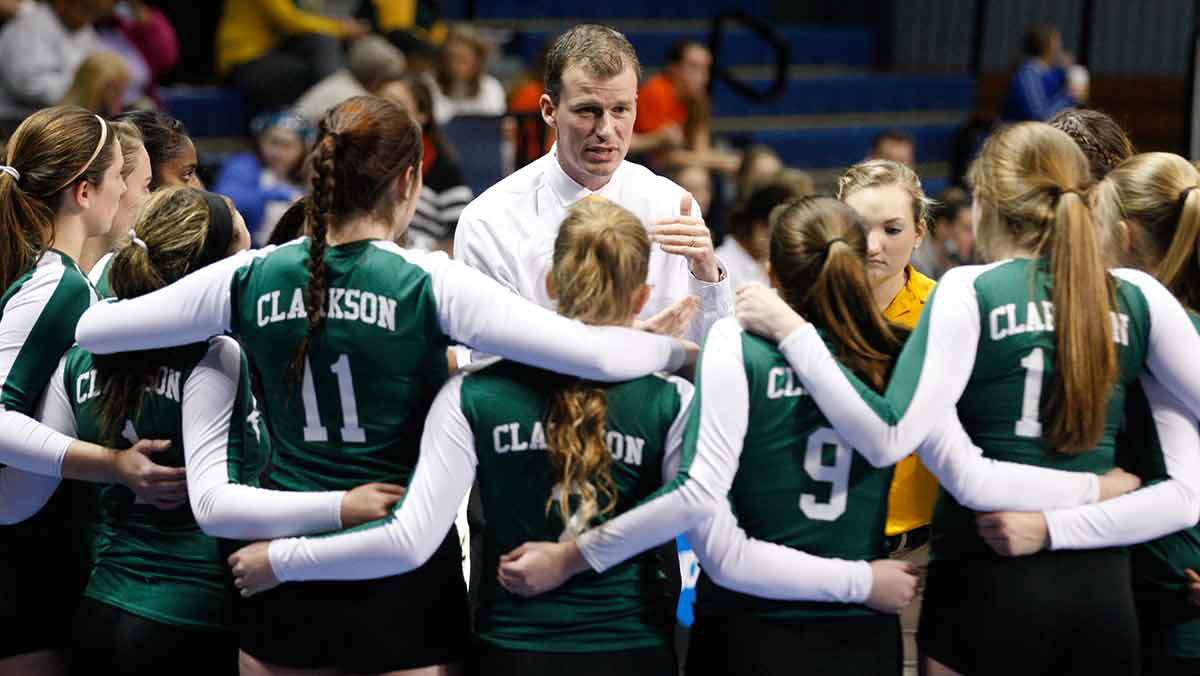 On Feb. 22, Susan Bassett ’79, Ithaca College director of athletics and recreational sports, announced the hiring of Johan Dulfer, the new head coach for the college’s varsity volleyball team. Dulfer became the eighth head coach of the program, following the resignation of head coach Janet Donavon a month prior after 24 seasons.

Dulfer previously was the head coach of Clarkson University’s volleyball program for 10 seasons. In the Bombers’ and Golden Knights’ most recent trip to the NCAA’s, No. 18 Clarkson beat the Bombers 3–1 and knocked the Bombers out of the tournament in the second round.

Assistant Sports Editor Lauren Murray spoke with Dulfer about his adjustment to the college, what he has been doing as head coach thus far and his plans for the upcoming season.

Lauren Murray: You officially took the reigns as volleyball coach March 7. What have you been doing with the team since then?

Johan Dulfer: Well, we are developing and installing a new system. … I have a philosophy on volleyball like most coaches do, so I’m sharing that with them and telling them what I think the key to success is going to be for us and working on those things. So I think what we are doing is probably a little different than what they have done in the past, but they’ve taken to it very, very well. … We’ve created a new vision on serving — we’ve talked about our system, in and out of system, they call it. Our offense in and out of system — and we’ve started talking about that. And I think there are a lot of mental things and conversations we’ve had about how we think about the games, so they’ve been doing a lot of things.

LM: How does the athletics environment differ between Ithaca College and other schools you have coached at?

JD: I’ve only been at three other schools. … I’m really impressed with the ability of student-athletes here to combine being the absolute best they can be in their field of study and also not being apologetic for wanting to be the best they can be on the court, or the field or the pool or wherever they compete. So I think that is unique about Ithaca is that you are able to do both at a very high level.

LM: How do you think your previous experience will help you?

LM: What do you think our biggest challenge will be?

JD: I think anytime a new coach arrives on the scene, we’re going to find a new way of doing things. What I hope is that a little bit of that comes from me and a little bit of that comes from them. A little bit of what they are used to will remain, and a lot of what I am used to will remain, and there will be a lot of new things for each of us, and my challenge, I think, is going to be to make that transition quick and smooth to where we can get to a point where we are comfortable.

LM: What is your book, “A Program with Purpose: Thoughts on Building a Successful Volleyball Program,” about, and what influenced you to write it?

JD: Well, I sat down one year in our quiet period in December after a season, and I thought to myself: We’ve had a bunch of really successful seasons. My last program had quite the transformation from the first year I was there to the year I left. I just wanted to write down some experiences, and so I had a whole bunch of different stories and a few had already been published in magazines, like a couple of pages at a time. So I thought, why not combine it? Initially, it wasn’t meant to be published for the world to see, and it’s still hidden. You have to search very well on Amazon to find it. But what I wanted to do was leave behind a little bit of a story of the last 10 years for alumni and players that have played for me and just something fun for them to think about, ‘Oh yeah, this is what we used to do, and these are some of the drills we used to do,’ and that is what it was meant to do. So maybe one day, my son can say, ‘Hey, daddy used to coach, and he was stupid enough to write some things down for me to laugh at.’ But, it turned into a really fun project. A lot of alums have ordered it, and a lot of people have great memories of the years we spent together at Clarkson, so it was a good project.