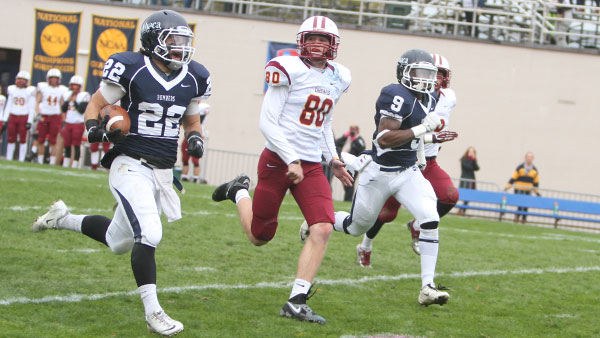 The football team’s veteran defense has lived up to its preseason expectations, keeping the team in every game this season. However, the Bombers find themselves in playoff contention because of the emergence of several newcomers on the offensive side of the ball.

Two newcomers scored touchdowns in the Bombers’ 25–22 win against St. John Fisher College on Oct. 26. Junior fullback Ben Cary and freshman running back Evan Skea each scored their first career touchdowns as part of a 13-point, third-quarter rally for the Bombers. Sophomore kicker Max Rottenecker made two field goals, including a 41-yarder in the fourth quarter, which proved to be the game-winner. Bombers head coach Mike Welch said the program’s depth has been pivotal in getting the team in its current position.

“When we put somebody in a position to make plays in a significant role in a game like this [against Fisher], we expect them to [make a difference],” Welch said.

Rottenecker and Cary were both a part of last year’s junior varsity team that won the Empire 8 championship. Junior running back Tommy Padula — who has the second-most rushing attempts on the team this year — was also featured on last season’s JV team. Padula said he and the rest of the new varsity players have closely bonded throughout their championship-winning season.

“We all have a tremendous amount of respect for each other,” Padula said. “We battled together, and we dreamt of that Saturday when we would hear our names called. It’s been a big buildup to where we are.”

Padula and the other members of the 2012 JV team also narrowly beat Fisher, a victory he believes prepared the Bombers for the three close wins the varsity team has had this year.

Another inexperienced player who has risen to the occasion for the Bombers is junior quarterback Tom Dempsey. The team won all three games Dempsey started when he took over for injured senior Phil Neumann. He said the team’s first win against Fisher since 2005 is a sign that the team is forging its own identity as a contender.

“We were talking about [our past results last Friday], but this is the 2013 Bombers,”  Dempsey said. “It’s not of concern to us how the teams in the past have done.”

The Bombers are on the verge of accomplishing something teams of the recent past have not done — make the NCAA Tournament. If they win their next two games against Frostburg State University this Saturday and Salisbury University on Nov. 9, the Blue and Gold will claim an automatic qualifier place in the tournament. This would be their first postseason appearance since 2008. Skea said the win against Fisher is a pivotal momentum swing.

“This is a huge game and something that can push us toward the rest of the season,” Skea said after the game Oct. 26.

Skea began practicing with the varsity squad Oct. 22 after ankle injuries to senior Rakim Jones and freshman Tene Samuto. In the win against Fisher, Skea led all the Bombers with 62 rushing yards on 20 carries. Skea said he was fully prepared to play after just one week with the varsity squad.

“You have to always be ready,” Skea said. “It’s tough to last a full season. You see Rakim and Samuto go down, and it’s tough to see that, but you have to be ready.”

Jones and Samuto each did not practice last Tuesday and may not play this weekend. That potential impact of the loss is now minimized, given the Bombers’ newfound depth at running back. Padula said the squad has remained grounded throughout its playoff push.

“It’s awesome how we have these JV guys stepping up,” Padula said. “We’re all playing for each other, we’re not playing for attention. I don’t care if I have a camera in my face, a microphone in my face, I just want a W, and if we got 22 guys on the field that all want a W and don’t need that, then we’re going to keep winning.”