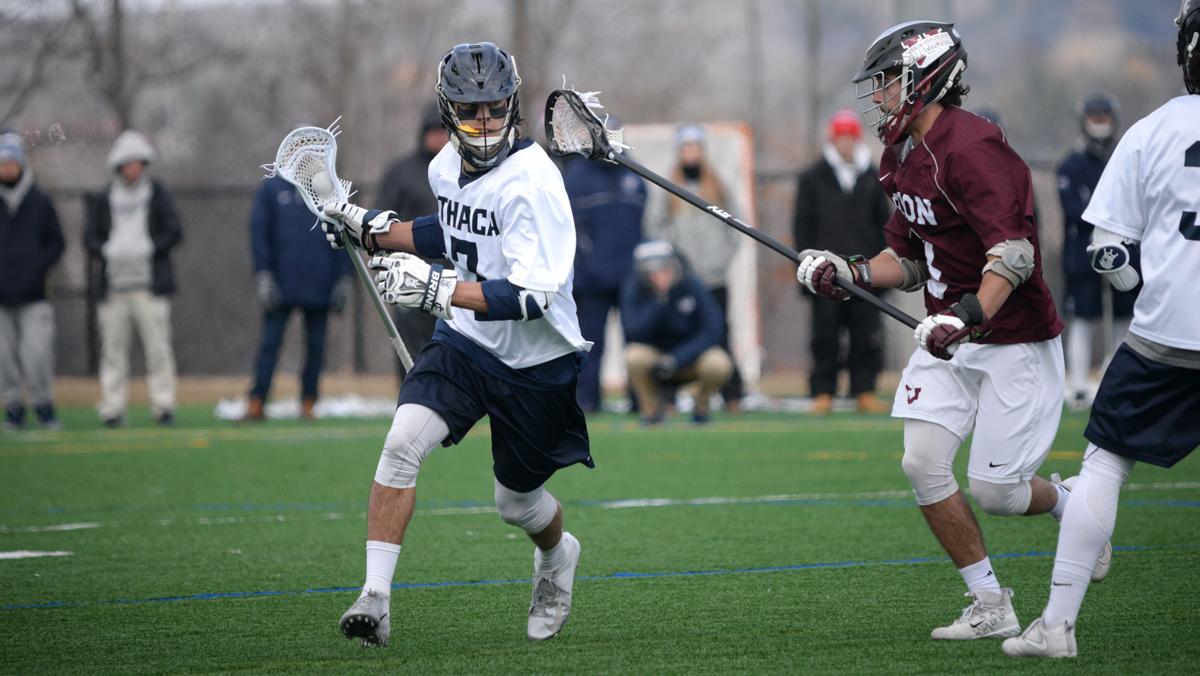 On senior day, the No. 19 Ithaca College men’s lacrosse team defeated Union College 13–8 in Liberty League Conference action April 7  at Higgins Stadium. With this win, the South Hill squad is 10–1 on the season and 4–1 in Liberty League play.

It was a slow start for the Bombers as they fell down to a 3–0 start with 7:27 remaining in the first quarter. Senior attack Jake Cotton opened up the scoring for the Bombers at the 6:25 mark of the first quarter. Sophomore forward Ryan Ozsvath would also find the back of the net in the quarter, making the score 4–2 heading into the second frame of play with Union scoring again right before the break.

Union continued their strong play in the beginning of the second quarter with an early goal at the 14:29 mark. From this point forward, however, the Blue and Gold would come alive by scoring four unanswered goals. The offensive spurt gave the college its first lead of the game 6–5. The South Hill squad’s momentum would be disrupted heading into halftime as Union tied it up 6–6 right before the half ended.

Jeff Long, Ithaca College head men’s lacrosse coach, said that he hoped senior day would be a momentum to play well in the second half.

“We didn’t say much at half time, we really just put the game in the hands of the seniors with it being senior day,” Long said. “I think we just needed to relax a bit, we were forcing the issue so I just told the guys to loosen up and have fun.”

The Bombers had a much stronger start to the second half as they scored two unanswered goals in the third quarter, making it a 8–6 game heading into the final frame.

“I think our team had a much better second half because once the speed of play picked up, we came in to our own,” Long said. “Our defense tightened up and I think this was a huge help.”

It became a shootout in the fourth quarter as the Blue and Gold’s offense exploded by putting up five goals. Union had two goals of their own in this quarter but that was not enough as they couldn’t keep up with the South Hill squad’s pace.

Leading the way for the Bombers was Ozsvath and freshman attack Connor Brumfield. Both players had four goals in the match while Brumfield added an assist to his performance as well. Also contributing was Cotton, who had an impressive senior day performance by scoring two goals and picking up two assists as well.

“We really just played for each other this game and we played for our seniors,” Oszvath said. “We didn’t want our seniors to have their senior day spoiled so we were all determined to give it our all and come back when we were down.”

The South Hill squad returns to action at 4 p.m. April 11  as it hosts No. 1 the Rochester Institute of Technology at Higgins Stadium.