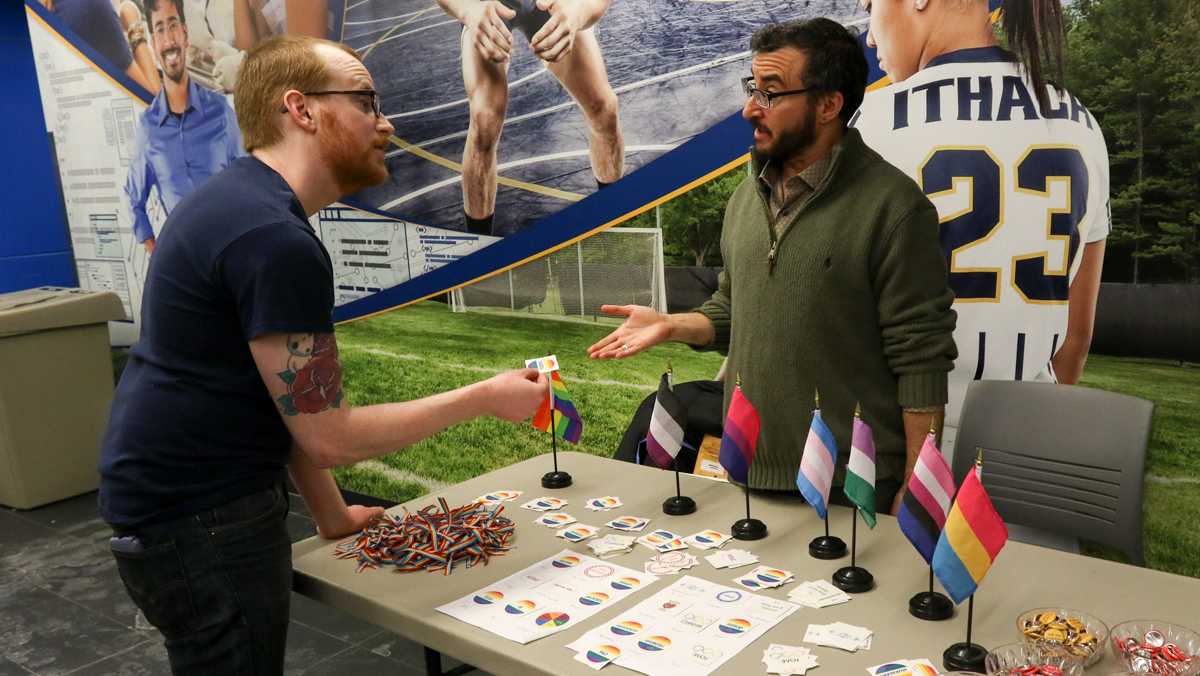 Ithaca College’s men’s and women’s basketball teams hosted the second annual PRIDE Night event Feb. 9. While the Bombers took the court, members of the Office of Intercollegiate Athletics and the Center for LGBT Education, Outreach and Services went to work promoting the college’s resources for LGBT students, as well as engaging the crowd with entertainment and giveaways.

This year’s event was spearheaded by senior Annette Hogan-Auchmoody in November, while she was working as a marketing and promotions intern for the Office of Intercollegiate Athletics. She said she wanted to do something with her position that would create a significant impact on the community.

“I’m always looking to help groups, people individually, anything to get their word out if that’s what they’re all about, or just making someone feel welcome and wanted and to know that they have a support system throughout wherever they may be,” said Hogan-Auchmoody. “I very well could have organized a fun theme night or something, but I just know from being in college athletics and watching other schools that pride nights are something that’s pretty common.”

This year, however, there was a strong focus on promotion that brought the event closer to the public eye. A series of videos went up on the Ithaca College Athletics’ Instagram page supporting the national “You Can Play” campaign that encourages LGBT athletes to pursue their talents. Athletic Communications Associate Bridget McCann was brought in to oversee the production of the videos, and she said she is already noticing a difference in awareness.

“I was not involved last year, but from what I’ve heard we’re getting a lot more attention,” said McCann. “Now we’re trying to put out the videos and let people know that we’re inclusive, and we’re hosting a game to honor the people of the LGBT community.”

The event featured music from DJ Washburn, a local DJ, and giveaways of rainbow sweatbands. Throughout both games, announcers gave facts about the college’s LGBT community, while the LGBT center tabled outside to provide any resources for those that were interested in learning more. As far as inclusivity goes, Manning acknowledged the importance of support from the athletics department.

“You know, there’s, at times, a stigma around athletics and being inclusive of the LGBT community,” she said. “It’s important that we as leaders, and as sometimes the face of an institution, say that we support our LGBT community.”

Hogan-Auchmoody reached out to Luca Maurer, program director for Ithaca College’s Center for LGBT Education, Outreach and Services, for help in obtaining the right resources. As word of her idea spread through the athletics offices, she was also approached by Michelle Manning, associate director of the Office of Intercollegiate Athletics, who offered to aid her in the project.

“We’ve been supporting and helping engage and help think broader to make sure that we’re connecting the groups appropriately,” said Manning. “Annette’s done a great job of talking to all of the people and all of the areas and connecting the dots and putting all of the pieces of the puzzle in place so that hopefully this will be a great promotion and event.”

While this was the second PRIDE Night to occur, many people were unaware that the first had even happened. Some players on the women’s basketball team said they were not aware of the event until they got to the game last year.

Maurer said he recognizes that while they may have had some uncertainty surrounding last year’s event, the turnout and response from the community made it worth doing again.

“I think last year there was a lot of excitement about the idea, and I think we didn’t know how it would be received or what kind of scope we could attain,” Maurer said. “So this year, we were like, yes, people are interested. We know people will be in the stands and that they might want information. Let’s also make sure there’s a DJ and giveaways to make it even sort of a bigger event.”

Maurer said that while he is unsure of what it will look like, there will be an event like this next year.