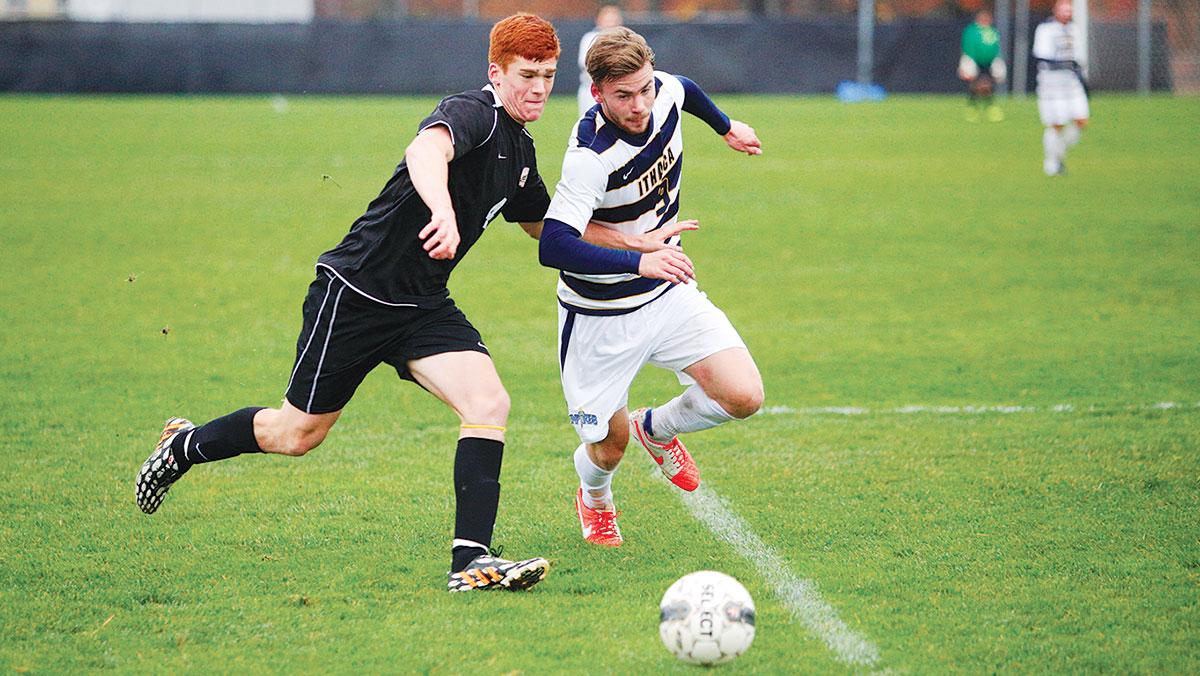 The women’s soccer team wrapped up its regular season dropping a non-conference heartbreaker to Misericordia University on Oct. 29 in Dallas, Pennsylvania, in overtime by a score of 3–2.

The South Hill squad was down by two goals until Niemiec found the back of the net midway through the second half, and King followed with her tally with just over two minutes remaining in regulation to equalize.  But just over a minute into overtime, Misericordia junior forward Meghan Antrim headed home a free kick from freshman back Kristen Ritter to give the Cougars the win.

Despite the tough loss, head coach Mindy Quigg said she liked what she saw out of her team.

“I liked our spirit, our comeback,” she said. “We were down 2–0, we talked a ton at halftime about what we needed to adjust. We came out with a whole different mindset, a different kind of confidence. That’s telling. That’s a good sign for a young team that you can do that.”

That resolve and bounce-back attitude will come in handy in the coming weeks as the Blue and Gold enter the playoffs. The Bombers record now stands at 13–3 as they gear up to host the Empire 8 Championship Tournament on Nov. 7 and 8 at Carp Wood Field.

The field hockey team was able to mount a strong end to its season, winning the last three games while finishing 8–8.

On Oct. 28, the team pulled away to beat SUNY Geneseo at Higgins Stadium in double overtime by a score of 2–1. The first half ended in a 0–0 tie, but just 10 minutes into the second half, senior midfielder Natalie Lynch was able to net a goal off of the right post. The Knights then scored with just over 10 minutes left in regulation. Sophomore goalkeeper Katie Lass saved one shot in the first overtime, then the Bombers got the goal they needed from sophomore forward Cassie Schuttrumpf in the second overtime.

In its last game of the season, the team was able to come away win another win, this time on the road against Hartwick College on Nov. 1 in Oneonta, New York. Junior back Caitlin O’Brien, senior forward Danielle Coiro and sophomore midfielder Colleen Keegan-Twombly all netted goals in the win. O’Brien was able to get the Bombers off to a quick lead, scoring just over five minutes into the game. Coming out of the first half tied at 1–1, Coiro and Keegan-Twombly were able to put two more away, giving the Blue and Gold the 3–1 win.

The South Hill squad ends its season, narrowly missing the Empire 8 Conference Championships. The top goal scorers of the year were the three who scored in the last game of the season, Keegan-Twombly, Coiro and O’Brien with nine, seven and five, respectively. Lass played every minute for the Bombers, maintaining a save percentage of .815 and totaling 5 shutouts, both of which ranked first in the E8.

The men’s soccer team fell 2–1 to Rochester Institute of Technology on Oct. 29 at Carp Wood Field in a non-conference game. Junior midfielder Brandon Thompson scored the lone goal for the Bombers in the second half, before RIT scored two successive goals with a minute of one another to seal the victory.

The Blue and Gold then defeated Nazareth College 1–0 in overtime on Nov. 1 at Carp Wood Field. Sophomore back Andrew Coburn scored the goal for the Bombers at the minute 98th with an assist from junior back Joseph Dobbins. With the win, the Bombers earned the second seed in the Empire 8 playoffs.

This win also marked head coach Andy Byrne’s 300th victory as coach of the team. Byrne has been the coach over the last 31 years, with an overall record of 300–173–58.

Junior back Jordan Filipowich said he believes the team played a great game to finish the regular season.

“We held the ball and possessed very well throughout the entire game,” Filipowich said. “We had some great opportunities that started from the back. It was a great win that will keep our momentum going into the conference tournament.”

The Bombers will travel to Hoboken, New Jersey on Nov. 7 to face Utica College in the E8 semifinal.

The football team defeated the SUNY Brockport Golden Eagles 24–14 on Nov. 1 in Brockport, New York, giving it a chance to clinch a berth in the NCAA Tournament with a win next weekend.

Junior wide receiver Josh Oliver got the bulk of the carries at running back with the Bombers’ three primary running backs all sidelined due to injury and led the Blue and Gold (6–2, 5–2) with 166 rushing yards and a touchdown. Senior quarterback Tom Dempsey’s streak of consecutive games with more than 300 passing yards ended but he threw two touchdowns to senior tight end full back Ben Cary.

With Salisbury University’s loss to Alfred University and St. John Fisher College’s win against Buffalo State College, the scenario for the Bombers’ next game on Nov. 8 against Fisher in Rochester, New York, is clear: Whoever wins clinches a spot in the NCAA Tournament.

The volleyball team dominated in its final weekend regular season play, sweeping all its opponents in straight sets at the Dig Pink Oneonta Invitational in Oneonta, New York.

The Bombers began the weekend on Oct. 31 against SUNY Plattsburgh. In the straight set win, senior outside hitter Rylie Bean and freshman outside hitter Joelle Goldstein each had 11 kills while freshman setter and libero Kayla Gromen had 10 assists.

On Nov. 1, the Bombers played two matches, winning both in straight sets. Against Baruch College, the Bombers won by the scores of 25–20, 26–24 and 25–18. Sophomore libero Maggie Mutschler had a strong performance, recording 15 digs in the victory. Later in the day, the Bomber defeated Hunter College 25–23, 25–19 and 26–24. Goldstein and Bean each dominated the frontcourt, recording 10 kills apiece.

The Blue and Gold finished the regular season with a record of 23–10, finishing in third place in the Empire 8 with a conference record of 6–2, qualifying for the E8 Championship.

The Bombers will take on reigning conference champions Nazareth College as the No. 3 seed in the semifinals on Nov. 7 in Rochester, New York. If the Blue and Gold defeat Nazareth, they will play the winner of Stevens Institute of Technology and Houghton College on Nov. 8 for the E8 title.

Gromen said the team is excited to reach the playoffs and is expecting a good game against Nazareth.

The women’s team earned their 12th straight Empire 8 Championship title. Senior Alexa Rick led the Bombers with a time of 18:09.1, finishing fourth overall out of 89 runners. Seniors Hannah Wright and Emily Smith took fifth and seventh place finishes for the Blue and Gold. All seven Bombers finished in the top-15, while six runners also recorded their personal best times.

For the men’s team, junior Sawyer Hitchcock finished first, clocking in a time of 26:00.1. Sophomore Sean Phillips followed him, placing second with a time of 26:09.6.

Finishing in fifth, sixth and seventh was junior Stephen Gomez, freshman Tim Chappell, and senior captain Dennis Ryan, respectively. All of the Blue and Gold’s seven runners finished in the top-20.

Both teams are scheduled to compete at the NCAA Atlantic Region Championships on Nov. 15 in Rochester, New York. Chappell said the competition is going to be a lot tougher.

“We’re going to see more tougher schools, but our teams are definitely up for the challenge,” said Chappell.