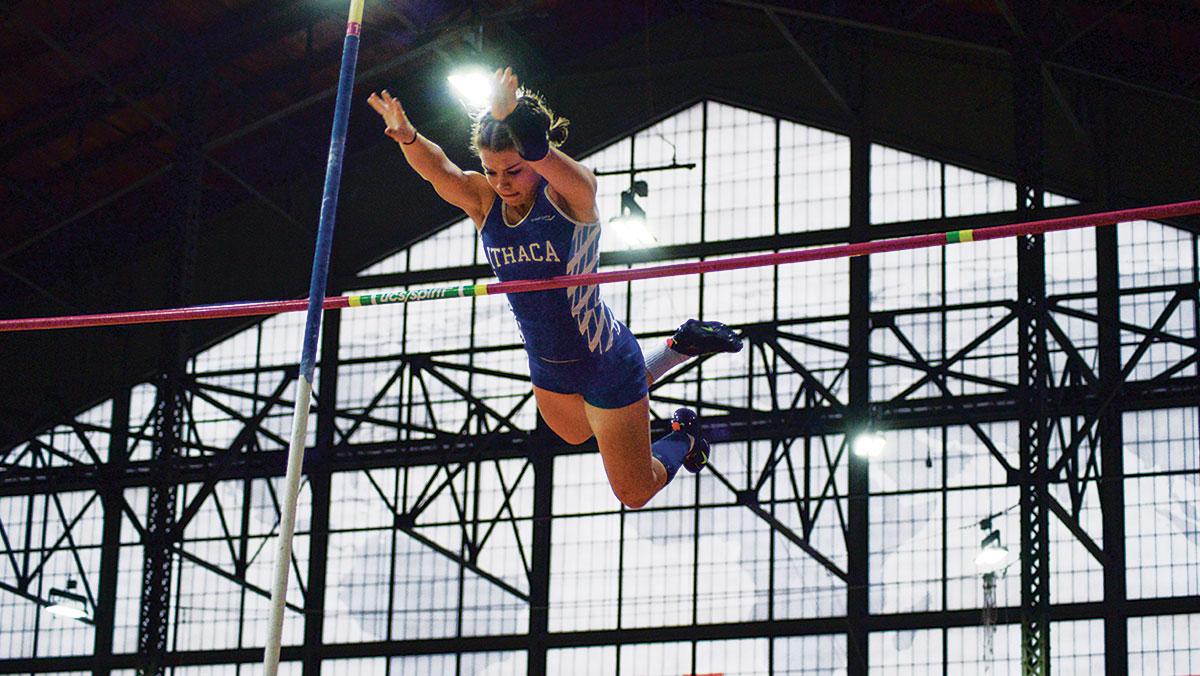 The wrestling team traveled Dec. 6 to York, Pennsylvania, to compete in the Spartan Invitational at York College.

The 12th-ranked Bombers finished second in the tournament with a score of 120 behind fourth-ranked Delaware Valley College, which amassed 128.5 points.

The Blue and Gold sent three wrestlers to the finals and had eight place winners in the top six overall.

Leading the team was sophomore Nick Wahba, who won the individual championship at 141 pounds by defeating Michael Ferinde of Johnson & Wales University 2–1.

Other finalists for the Bombers included senior Alex Gomez at 133 pounds and junior Dan Pak at 149 pounds. Both took second in their respective weight classes.

Next up for the Bombers is a dual match against Rochester Institute of Technology at Glazer Arena on Dec. 10, followed by a dual match at SUNY Oswego on Dec. 13.

The women’s basketball team improved its record to 5–1 after defeating St. Lawrence University on Dec. 6 in Canton, New York.

The Bombers led from the opening tipoff as they jumped out to an early 8–2 lead and never looked back, winning the game 63–57. Senior forward Francesca Cotrupe led all scorers with 15 points, while freshman guard Jordan Beers chipped in12 off the bench. Cotrupe also added 12 rebounds to post her first double-double this year while sophomore guard Ali Ricchiuti had seven.

Since their loss to John Carroll University on Nov. 30, the Blue and Gold have posted two close wins over SUNY Cortland and St. Lawrence. Senior guard Sam Klie said the team is trying to continue its momentum.

“We need to continue challenging each other in practice so that when it comes to game time we’re able to play at the tempo that we
want to play at,” she said. “We just need to continue to learn how to play with each other knowing what our strengths are and make good decisions offensively.”

The Bombers will return to action on Dec. 13 against the University of Rochester in Rochester, New York.

Senior distance runner Alexa Rick gathered the Bombers’ top finish at the meet by placing first in the 5,000-meter run. Clocking in at 18:36.31, Rick beat the closest Division III competitor by 11 seconds.

Both junior Alex Rechen and sophomore Natalie Meyer qualified for the ECAC Championships in pole vault and high jump, respectively. Rechen placed second in her competition with a height of 3.60 meters, while Meyer placed third in her event with a clear of 1.70 meters.

On the men’s side, senior Rashaad Barrett qualified for the ECAC Championships in the preliminaries of the 60-meter dash with a time of 6.97 seconds. Barrett ran 7.04 in the event’s final.

Juniors Andrew Brandt and De’Marquis Graves both earned top-four finishes for the Bombers in the high jump and triple jump, respectively. Brandt placed fourth in his event with a clear of 1.94 meters, while Graves earned a third-place finish by recording a distance of 13.9 meters.

The men’s team will return to action Jan. 16 at the New York City Gotham Cup in New York, New York, while the women’s team will next compete Jan. 9 at Cornell in the Southern Tier Collegiate Open.

The men’s and women’s swimming and diving teams competed in a three-day invitational at the Athletics and Events Center Aquatics Pavilion over the weekend. Both the men’s and women’s teams finished third overall out of the nine teams at the event. Only Cornell University and SUNY Geneseo finished higher.

The highlight of the men’s races came with a second-place finish in the 400-yard freestyle relay that capped off the event on Sunday.  Cornell edged seniors Logan Metzger and Lucas Zelehowsky, and juniors Addison Hebert and Adam Zelehowsky. The Bombers’ relay finished with a time of 3:07.32 while Cornell finished in 3:07.16.

Metzger said this year he felt was one of the team’s strongest performances at the Bomber Invitational since he has been on the squad as the team looks ahead to the second half of
the season.

“This year, a lot of people got best times, myself included, and had really good swims all around,” he said. “Both the guys and the girls are even more motivated going forward into training trip since we’ve already seen how well we can do when we haven’t even hit the toughest part of training yet.”

On the women’s side, sophomore Grace Ayer and senior Kylie Bangs each earned top-three finishes in the 200-yard backstroke. The women’s 400-yard freestyle relay team earned a fourth-place finish with a time of 3:38.33, defeating four other teams in the process.

Both the men’s and women’s teams will host the University of Rochester Jan. 12 at the Athletics and Events Center.

The men’s basketball team continued to struggle as the Bombers lost again on Dec. 5 to St. Lawrence University 78–74, falling to 1–5 on the year.

The Bombers played behind most of the game to St. Lawrence, trailing by as many as 11 points in the first half and 13 in the second half. However, the team closed the gap in the final minutes of the game. The Blue and Gold went on a 13–2 run to make it the 76–72. Seconds later, senior center Keefe Gitto made a layup to make it a one-possession game.

St. Lawrence, however, sealed the win with two free throws in the final seconds.

Bevan said the team took both positive and negatives out of the game.

“I think the late rally shows how much heart we have,” he said. “But defensively, we still struggled, and that is something we need to work on next practice.”

The Bombers next play Dec. 10 against Wells College at Ben Light Gymnasium.