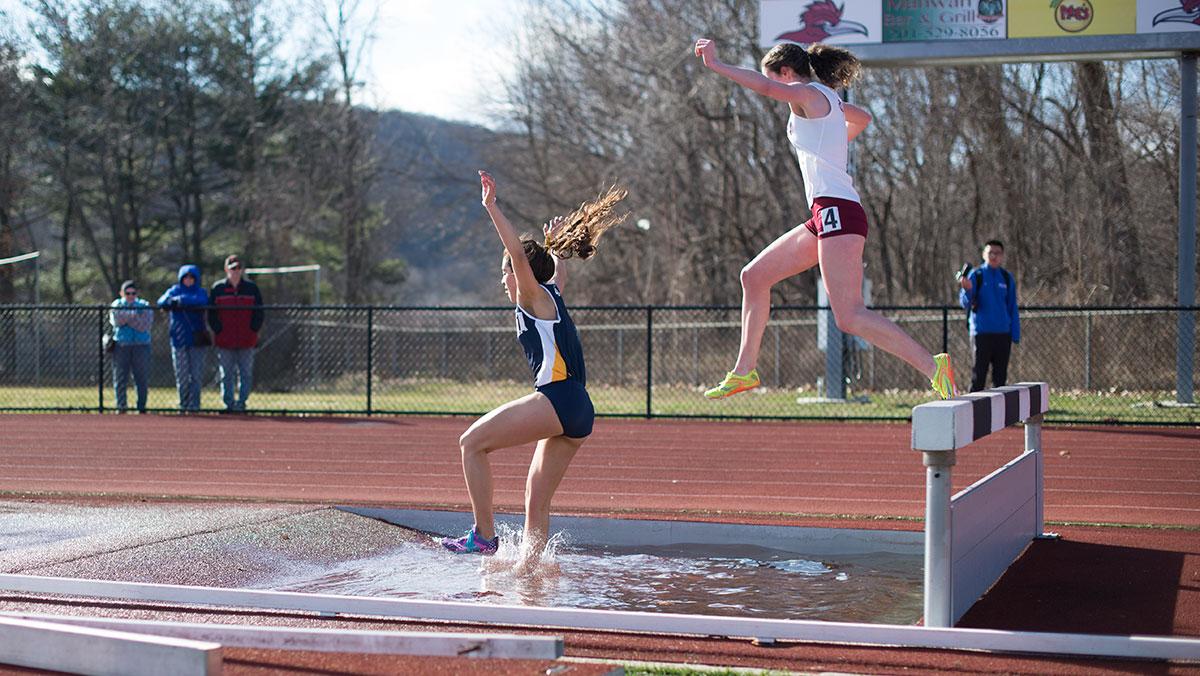 Tommy Battistelli/The Ithacan
Freshman Denise Ibarra leaps over bar in the 3,000-meter steeplechase during the Ramapo College Invitational on April 4 in Mahwah, New Jersey. The women's track and field team opened the outdoor season with a win at the meet.
By Ithacan Sports Staff — The Ithacan
Published: April 8, 2015

The baseball team swept both doubleheaders against SUNY Oneonta and Houghton College this past week, then dropped its final game of the week to the University of Rochester.

It was the offense that stepped up against Houghton. The Blue and Gold won 13–3 as sophomore second baseman Josh Savacool went 3-for-3 with three runs batted in and three runs scored. Senior catcher Cooper Belyea hit a double and drove in two runs. The Bombers closed out the series with a 6–1 victory. Sophomore third baseman Trevor Thompson hit his first home run of the season and drove two runs.

On April 7, the Bombers dropped a 2–0 decision to Rochester, which scored two runs on just four hits off of senior Andrew Sanders in his eight innings of work. Thompson and junior designated hitter Zach Pidgeon each had two-hit days for the South Hill squad.

After having last weekend’s regatta cancelled due to poor weather, it cleared up just enough April 4 for the rowing team to continue its success from the fall. The men’s team took first in two out of its four races against Rochester Institute of Technology and the University of Rochester while the women’s team swept the same two opponents.

The women’s team swept its regatta by placing first in all five of its races. Head coach Becky Robinson said her team relied on confidence.

“The first varsity rowed the race they needed to fuel their confidence moving forward,” she said. “The second varsity dominated their race and their speed showed last week in practice.”

The first varsity boat placed first with a 5:02.78 finish. The second varsity and third varsity boats finished first as well, while the lightweight team finished with a time of 5:58.3.

The Bombers led Cortland by four goals with 10 minutes left in the last quarter of the game after Manilla and Januszkiewicz scored 58 seconds apart. However, the Red Dragons went on a run and scored four goals, tying the game at 10.

The game ended after a save by Cortland goaltender Scott Tota. The Red Dragons converted and scored the game-winning goal with a 1:30 left.

Manilla said he saw both positives and negatives in the outcome.

“I think we could have been a little more aggressive in our 6-on-6 offense, but I thought we took a step forward with our man-up unit,” he said. “The biggest thing we took away is the same thing we have been saying for four years now: we need to be able to build off our leads throughout a game and finish the games in the fourth quarter.”

The women’s lacrosse team split a pair of Empire 8 conference games April 3 and 4 at Higgins Stadium.

On April 3, the Bombers cruised to a 22–5 victory over Hartwick College. The South Hill squad jumped on the Hawks early, with junior Ally Runyon contributing two goals in the first five minutes of play. The Bombers went into the half up 12–5, and added 10 more goals in the second half for its second conference win of the season.

The Bombers then suffered a loss against Empire 8 foe Stevens Institute of Technology on April 4, falling to the Ducks by a score of 14–13 in double-overtime.

After the Bombers took an 11–8 lead with 14 minutes left in the game, Stevens responded with four straight goals to go ahead 12–11 with 1:03 remaining. However, sophomore Morgan Cadwell responded with a goal with 11 seconds left to send the game into overtime. After each team scored once in the first overtime, the Ducks scored on their first possession in the sudden death second overtime for the crucial conference victory.

After the weekend, the Bombers’ record sits at 4–6. The team returns April 8 with a contest at William Smith College.

After a number of canceled and postponed games, the softball team was finally able to get back on the diamond. The Bombers won four out of six games to improve their record to 6–8.

The Blue and Gold started action against SUNY Cortland on April 1, dropping two games against the Red Dragons by scores of 0–1 and 3–4. The Bombers looked to bounce back when they traveled to Union College on April 3, taking both games by scores of 7–0 and 1–0. Junior pitcher Laura Quicker picked up the win in the first game, only giving up two hits on the day, while three Bombers contributed two hits apiece. In the second game of the day, junior pitcher Allison Macari pitched a shutout of her own, only surrendering two hits.

On April 4, the Blue and Gold took on Stevens Institute of Technology. In their first conference games of the season, the Bombers swept a doubleheader, defeating the Ducks 6–3 in the first game followed by an 8–3 win in the second.

The Bombers will resume play April 8 when SUNY Oneonta visits Kostrinsky Field for the Bombers’ first home games of the season.

The men’s tennis team fell to Stevens Institute of Technology 7–2 on April 4 at the Binghamton Racquet Club in Edgewater, New Jersey.

In the doubles competition, junior Chris Hayes and freshman Lorenzo Viguie-Ramos defeated sophomore Michael Feldman and freshman Kyle Henry by a score of 9–7.

Junior Chris Hayes said Stevens was likely the best competition the team will see in its Empire 8 opponents.

“Now that we have played Stevens, we know where we have to be in four weeks to be ready to compete in the conference tournament,” he said.

The Blue and Gold compete next against The College of New Jersey in Ewing, New Jersey. The South Hill squad will then return to the Wheeler Tennis Courts to take on Nazareth College on April 19.

The women’s track and field team kicked off its spring season April 3 and 4 with a win at the Rampo College Roadrunner Invitational in Mahwah, New Jersey. The Bombers had a dominant performance at the meet, coming in first by 53 points over the second-place finisher.

They completed this strong performance with only one first-place finish, which came from junior pole vaulter Alex Rechen, with a winning height of 3.50 meters. Sophomore pole vaulter Katherine Pitman finished second in the event with a height of 3.35 meters. Other second-place finishes for the Bombers came from senior captain Christine Benway in the 100-meter hurdles and senior captain Emilia Scheemaker in the triple jump and 4×100 meter relay.

The men’s team was split for the weekend as half the team competed in the Muhlenberg Invitational in Allentown, Pennsylvania, and the other half was at the Roadrunner Invitational. In Muhlenberg, senior Rashaad Barrett took home the Bombers’ lone first-place finish in the 100-meter dash with a time of 11.04 seconds.

Both the men’s and women’s teams will next travel to the Moravian College Coach P Invitational on April 10 in Bethlehem, Pennsylvania.