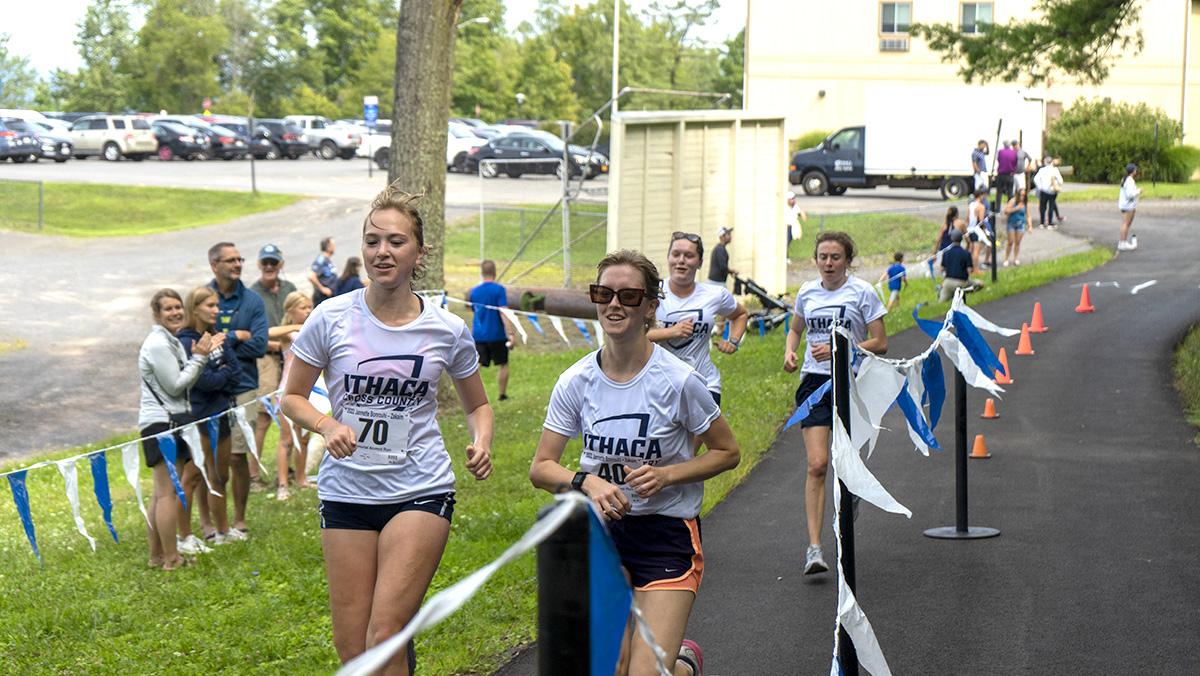 Atticus Rubottom/The Ithacan
The Jannette Bonrouhi-Zakaim Memorial Alumni Run is the only home meet of the season for the Ithaca College men’s and women’s cross-country teams. At this year’s race, senior Danny Jagoe won the five kilometer race for the men with a time of 16:42.60, while Parley Hannan ‘20 won it for the women with a time of 18:03.00.
By Aidan Charde — Sports Editor
Published: September 7, 2022

As the runners lined up to await the start gun for the Jannette Bonrouhi-Zakaim Memorial Alumni Run at 11 a.m. Saturday, Sept. 3, Jim Nichols, head coach of the Ithaca College men’s cross-country team, made sure the athletes knew how important the event was.

“Family,” Nichols said. “That’s what this is right here.”

For current athletes, alumni of all ages and their families, the alumni run represents more than just a race. Held every year since the mid-1980s — Nichols said he forgets the exact year it began — the run gives the team and its alumni a chance to connect with each other and have a memorable weekend.

“It’s just a really fun, low-key type of a thing to get the season started,” Nichols said. “And it brings our alumni back to something that’s a tradition, where they get to meet their former teammates and catch up on their families, how people are doing. And they get to meet our team and get to see our teams because we’ll send them weekly results.”

Dan Malay ’02 and Erin Malay ’03, a married couple who said they met on the cross-country team, have been coming nearly every year since they graduated. Although Dan Malay said he and his wife feel a lot slower every time they compete against the varsity athletes, it is still nice to be able to interact with the team.

“It’s good to come back and see how well the program has been doing,” Dan Malay said. “It’s fun to have our kids come and see what that’s like also, so that they can be cross-country runners someday maybe.”

There are two races each year. First is the “Will Be” run, where the children of alumni, all wearing Ithaca College cross-country shirts that read “Will Be” on the back, circle the Upper Terrace Fields. Afterward, alumni, who wear shirts that read “Has Been,” and current athletes, wearing their speedsuits, line up to take part in the 5K around the college’s home course around the Upper Terrace Fields and Kostrinsky Field before heading up through the natural lands.

Children are welcome to join the 5K as well, like 12-year-old Meghan Malay, the oldest daughter of Dan and Erin Malay, who said this is her third year doing the 5K and 12th doing the Will Be — which she said she and her sisters, 10-year-old Claire and 8-year-old Kate, have swept the past two years.

Even for people not involved directly with the team, like Ben Frahm — the husband of Erin Dinan, head coach of the women’s cross-country team — it can be great to see alumni come back year after year.

“It’s really exciting to see people coming back every year,” Frahm said. “And to see them grow up, too, and to get married and have families, and all that good stuff. It’s a really fun weekend.”

But for some, the event is even more than just a time to connect with past teammates or a tune-up for the season. Gitty Bonrouhi is the mother of Jannette Bonrouhi-Zakaim ’90, a former cross-country star at the college who is the namesake of the event. Bonrouhi-Zakaim died in February 2000 of an unknown cause at just 32 years old. Bonrouhi said seeing her daughter’s memory kept alive by the team means a lot to her, but it brings back some sad memories.

“It is bittersweet,” Bonrouhi said. “It’s nice to … keep her memory alive, and especially to see so many people.”

Lizzie Zakaim, the daughter of Bonrouhi-Zakaim, was just three when her mother died. Although both she and her younger brother David have almost no memory of their mother, Lizzie Zakaim said she appreciates that the college does an event in her honor.

“I just think it’s nice that her death wasn’t forgotten,” Zakaim said. “Something was done to keep it alive. And of course, seeing coach Nichols every year and how dedicated he is to keeping this going every year is really touching and inspiring.”

Nichols said he remembers learning of Bonrouhi-Zakaim’s death and how it affected him. Even though he was the men’s coach and did not work with her personally, she was at the time the most successful runner in program history, so he knew her well.

Now 22 years later, Bonrouhi-Zakaim has not been forgotten by the alumni of the program. Erin Malay did not run with Bonrouhi-Zakaim, but she said she was at the college around the time of her death and participated in the first race after it was named in her honor.

“We had met all of her family and knew the importance of the events,” Erin Malay said. “I think just, being in a small little running community, being able to come back and show support for her mom and the family is a really neat way to connect.”

Elvis Zakaim, Bonrouhi-Zakaim’s ex-husband, and his wife Andrea Zakaim also make the trip from New Jersey every year. Elvis Zakaim said he still enjoys being at the event and spending time on campus.

“It’s the pinnacle of our summer,” Elvis Zakaim said. “We come here very happy and leave here very sad. It’s the end of the summertime, and it’s hard to leave Ithaca behind. It’s inspiring to see what [Nichols] has done to honor her memory, and we appreciate it every year, every day.”

The run is only part of the weekend. After the run, Nichols invites all the attendees and their families back to his house, where they have a cookout and play a game of volleyball, alumni vs. current students — and of course, he said, the alumni almost always win.

“The alumni have won every match except maybe two or three out of 30 years,” Nichols said. “And the metaphor for that is that the alumni communicate with each other, they talk to each other. They’re able to do things whereas the young team still hasn’t learned to communicate … so that’s a metaphor of how the season’s going to go. A couple years back, the varsity actually beat the alumni, and that team qualified for Nationals.”

This year, Nichols said, the alumni came out on top again, but both teams will continue to work to qualify for Nationals. Both the men’s and women’s teams have to get ready for the competitive season ahead. Both teams will be racing at 11 a.m. Sept. 10 at Hamilton College for the first meet of the season.