Searching for a new identity 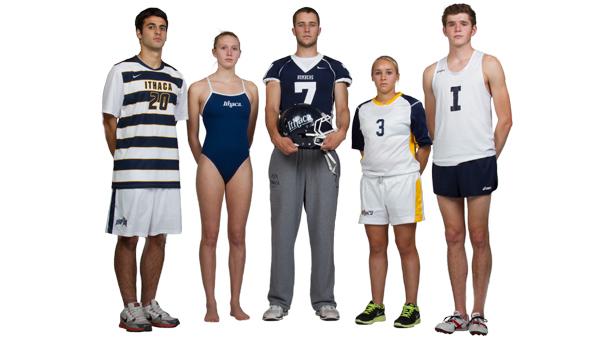 When athletes walk onto the field, court or course, they are no longer individuals — they are a single body united under one school. The players represent their school’s athletics department through their determination and team spirit and by proudly donning its logo.

But when it comes to Ithaca College athletics, the true Bomber image is disjointed among the 27 varsity sports teams, causing athletes, coaches and fans to question the identity of Bomber Nation.

Susan Bassett ’79, director of intercollegiate athletics and recreational sports and a former student-athlete at the college, said she is ready to brand a new, unified image for the Blue and Gold athletes.

“The athletic department is partnering with marketing, communications and athletic communications to undertake this identity redesign initiative,” Bassett said. “We are going to do something that embraces our tradition and respects our past, but shows a forward, consistent athletics identity that looks like part of the Ithaca College family.”

The revamping of the logo comes with no change to school colors, the Bomber name or the addition of the mascot, only a new design of the traditional logo and Ithaca lettering. Gladziszewski said the school is lacking a consistent logo across the Blue and Gold sports, so the department wants to create a look that embodies athletics and will work with every uniform.

“We have found in recent years some of our branding presentation has been inconsistent,” he said. “We have some different marks that [certain sports] like to use, and while they are at that one individual event, people might say, ‘That’s the Ithaca team.’ But if you line them all up next to each other, everyone looks different, and that’s not what we want.”

In spring of 2011, the college’s marketing communications office began a movement toward creating a mascot for the college’s sports teams. After failing to receive public support for the three proposed options, President Rochon decided to scrap the idea and left the sports athletic designs as they were.

Then in 2012, the college altered the imaging and word marks, or lettering, of the college. Now, the rebranding of the athletic department will be the second phase of the changes to the Ithaca College look.

The first step in the current logo process was sending out proposals to firms that are highly competitive in university athletic designs. From there, Bassett, Gladziszewski and Reuben will work together to choose a firm that fits the college’s needs in order to begin the development process in the beginning of November.

The firm will then request the help of focus groups to get the true feel for the college’s athletics program with the help of everyone from student-athletes and alumni to coaches and faculty.

Reuben said the firm will enroll the assistance of the college’s population, including athletes, to ensure that the new branding and word marks represent today’s athletic program and spirit instead of just recreating a previous logo.

“The firm will be interviewing them about what it means to [them] to be an Ithaca College student-athlete and what sets them apart from other institutions,” she said. “They want to find the core identity of IC so they can figure out how to express that visually.”

Senior field hockey back Emily Lash said she thinks the incorporation of the new sports logo will be extremely beneficial in making the college’s athletics program a cohesive group.

“It would mean a lot to athletes to have the same logo on every sport’s uniform because right now most teams are different,” Lash said. “As athletes, we play for Ithaca, and we will still represent it the same way, but I think [the new branding] will create even better unification of that idea.”

Once it creates a logo, the athletic department will begin to implement the new design into signage, uniforms and school-spirit apparel. Bassett said that with her new position and the push to rebrand the college, the athletics program will work to create a new identity for Bomber athletics and put it in place as quickly as possible to form unity across sports.

“This is a great time to do it because I’m new [as the athletic director], we already had the new college identity process and IC 20/20 is in action,” she said. “We will have to phase in some of the implementation due to financial implications, but we have a very aggressive timeline to put everything in place.”

Once the final design is complete and the college has implemented the new logo throughout sports complexes and on team and bookstore apparel, the department will work on designing the new Bombers website during the summer of 2014. Athletic programs with their own funds will also be able to use the new logo to create any desired equipment and apparel.

With the current plan in place, the redesign will launch in August of 2014, just in time for the Fall 2014 sports season.

Dan Raymond, head coach of women’s basketball, said it will not be easy to part with the college’s current athletic logo, but uniting the entire sports department will give Bomber athletics a new, consistent face across all squads.

“It’s really hard to describe what it means to be an Ithaca College Bomber,” Raymond said. “But I think it would be great to be a unified department under a single logo that represents our tradition and our history.”