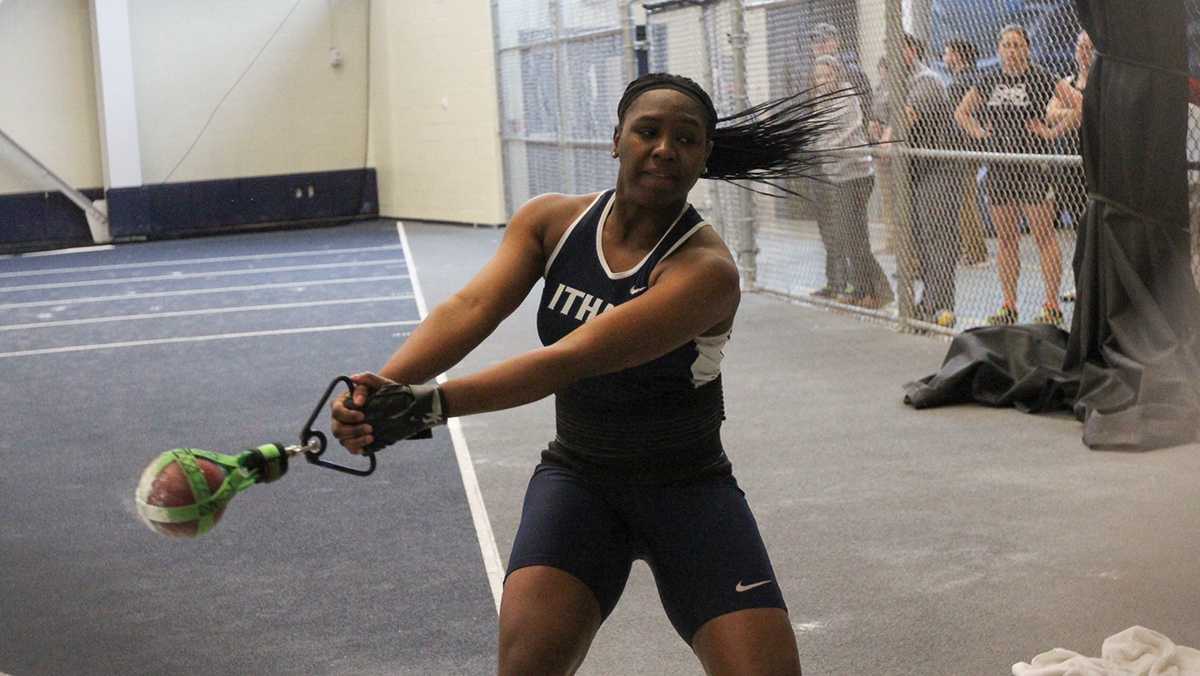 Waiting for her turn to throw, senior Brandy Smith, decked out in Ithaca College track and field apparel and black socks with gold stars, listens to music as she runs a warmup and stretches on the track at the Eastern College Athletic Conference Championship on March 4 in the Glazer Arena. When it is her time to compete, Smith takes off her warmup gear, steps up to the throwing circle, pauses to take a deep breath, glances over her shoulder to see where she’s aiming and makes her throw.

Smith is no stranger to big competition. Alongside the best throwers in Division III, Smith stood tall and powerful last May. It was her second year competing at the NCAA Championships and the second time she had taken home the trophy.

Now, Smith is preparing for the NCAA National Indoor Championships on March 10–11, where she will look to earn her third national title and first indoor national title. She said she still finds excitement in her sport years after she first began.

“I’m a natural competitor — even if I weren’t an athlete, I’d be competing in the classroom or anything I can find,” Smith said. “I love any opportunity to compete; traveling for meets gets me amped up. Putting on my uniform gets me amped up. I look forward to every meet.”

Part of the reason she loves competitions is because of the feeling of excitement that comes along with preparing for them, whether they are the most insignificant of the season or the most important, she said.

In May 2015, Smith became the first outdoor track and field national champion in the college’s history, and the fourth women’s track and field student-athlete to win a national title. Smith won the national title in the discus throw at the NCAA Division III Outdoor Championships with her career-best, record-setting throw of 53 meters.

Smith is currently focusing her training on nationals and will begin her taper a few weeks before that meet. She began track and field when she was in middle school and continued throughout high school, where she was a Florida state finalist in the discus and shot put during her senior year. Smith also broke her school’s discus, shot put and 400-meter relay records during her tenure. She was a natural and got recruited by several schools.

The college was just one of the schools that recruited Smith. While touring potential colleges, she said she found her calling when she first saw the Athletics and Events Center on the college’s campus, even though this would mean learning to endure Ithaca winters.

“The A&E Center is a new facility and amazingly built,” Smith said. “It’s the best. We travel a lot, and I haven’t seen anything that matches what we have in A&E.”

There are eight throwers on the women’s track and field team, and senior thrower Francesca Boylan said they are all close friends.

“We are a very tight–knit group,” she said. “A bunch of us upperclassmen live together, and we have become very close friends over the past few years.”

As the season progresses, meets become more challenging, but also more rewarding, Smith said. Because they have more riding on meet outcomes, she said, it is important the athletes train in ways that fine-tune their abilities.

During her freshman year, she threw for 43.23 meters in the discus throw. The next year, during her sophomore year, she achieved her personal record of 53 meters at the NCAA Outdoor Championships.

Smith is the only thrower to qualify for nationals from the women’s team, which means her training progresses in a slightly different way than her teammates’.

“Unfortunately, I’m the only thrower who qualified for nationals,” Smith said. “The difference in [my] training is that I take more throws than other throwers. I taper later than them, too. I taper for the national meet, doing more reps in the weight room, heavier reps for a longer period of time. You want me to be freshest for the national meet.”

Though her teammates didn’t qualify for nationals, they are supportive of Smith’s opportunity to go.

“The team is incredibly proud of Brandy and her titles; she works so hard to be the very best,” freshman thrower Rosie O’Donovan said. “She deserves it.”