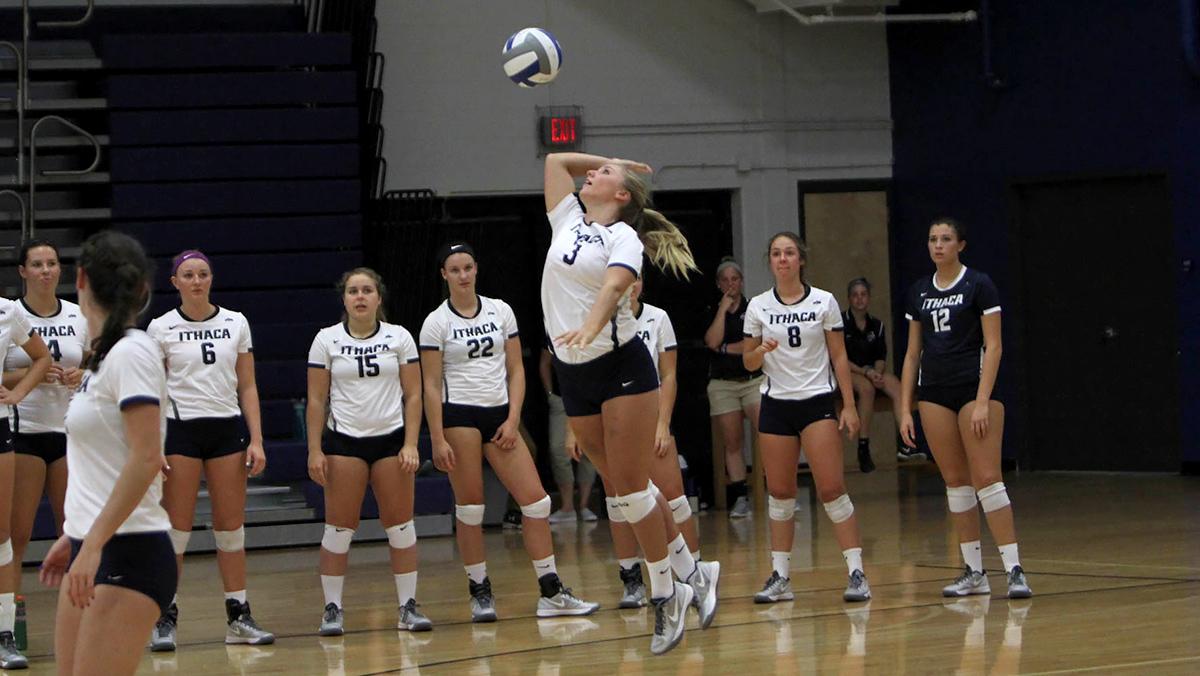 CAITIE IHRIG/THE ITHACAN
Senior Myan Idziur plays against SUNY Oswego on Sept. 6 in Ben Light Gymnasium. Idziur, who was not on the roster last season, worked out at the Fitness Center last year to stay in shape.
By Lauren Murray — Assistant Sports Editor
Published: September 20, 2016

After not being on the roster for the Ithaca College volleyball team last year as a junior, senior Myan Idziur has found herself back on the courts in Ben Light Gymnasium.

Idziur was on the team her freshman and sophomore years. As a sophomore, she saw action in all 36 matches and was ranked second on the team with 267 digs.

After not making the team her junior year, Idziur said, she did not want to go another year without playing volleyball.

“I definitely wanted to play again,” she said. “It was such a big part of my life. When I knew I could come back, I wanted to.”

She said many players do not get the opportunity to come back to a team, but with this team’s having a new coach who was willing to give her the opportunity, she said she is grateful. Johan Dulfer was hired Feb. 22 and replaced former head coach Janet Donovan.

Idziur began playing volleyball in seventh grade. She went to Orchard Park High School in Orchard Park, New York, where she was the captain of its volleyball team her junior and senior years. She also played basketball since she was in elementary school up until her senior year of high school.

She said she was always a part of a team and that was a feeling she missed last year.

“It was such a big part of my life,” Idziur said. “I’ve never not been on a team since I was 6 or 7. Every single year I’ve been on a team. Obviously just being on a team is a big deal.”

Idziur said she had a huge support system from her friends and family during her time away from the court.

“A lot of my close friends are or were volleyball players … and they just supported me in whatever I decided to do,” she said.

Idziur said the daily commitment to the Bombers helps her balance and adjust her schedule.

“Me being an athlete has helped me manage my time,” she said. “A lot of people are like, ‘Oh, you’re busier as an athlete. It’s harder to get schoolwork done.’ But for me, it actually helps me because I have to plan out my schedule more. I feel like I’m more balanced with it.”

In her time away from the Bombers’ volleyball court, she played intramural beach volleyball and went to the gym to stay in shape. Idziur mainly did cardio workouts while at the gym. For lifting, she followed the guidelines of old fitness plans made by a previous trainer.

As for staying in volleyball shape, Idziur said it is difficult to practice on a court alone, and it is not easy to set up a net and play anywhere. One of her housemates, and former Bomber athlete, senior Breanne Tuohy, would go to the Fitness Center with her and “pepper” on the lower courts to get touches on the ball. Pepper in volleyball is a warmup drill between two players to pass, set, hit and dig the ball back and forth continuously.

Before the start of the Bombers’ spring 2016 season, Idziur reached out to Dulfer in the spring to see if she could practice with the team again. She soon began playing volleyball with the team and participated in all team lifts again.

Due to Idziur’s positive and upbeat attitude, teammate and junior Caroline Gerulskis said she enjoys Idziur’s presence and that she is always someone Gerulskis can talk to.

“She always has a smile on her face,” Gerulskis said. “I look forward to seeing her every day. She’s one of those people that you want to tell your day to.”

In his first year coaching Idziur, as well as the rest of the team, Dulfer said she is great in her position as a defensive specialist.

“She’s a really good server, and she has what I call ‘reckless abandon,’” Dulfer said. “We stick her in the middle of the court, and she plays up more than our other defenders because she will make plays out of thin air, so she’s kind of like that ‘I’ll do whatever it takes’ kind of girl.”

As of Sept. 12, Idziur has played in 18 sets in seven games so far this season. In her freshman season, she played in 34 of the 38 matches. She set a team-best 50 aces that season and ranked second among the Bombers with 256 digs.

Gerulskis said Idziur is a consistent player on the court is a fun teammate to play alongside in games and practices.

“She goes out, and she gets the job done,” she said. “You could always rely on her.”

Idziur, who will remain at the college for a fifth year to get her master’s degree in occupational therapy, can use her fourth and final year of NCAA eligibility for next season. However, she said she is unsure if she will continue to play volleyball for the Bombers in 2017.

“I have no idea,” Idziur said. “Honestly, it just depends on my program … because we’re doing fieldwork and it’s a busy year. If I can do it schoolwise, yeah I’ll want to.”

Gerulskis said she felt something missing not having Idziur on the court with her last season.

“I feel like she picked up where she left off,” Gerulskis said. “It was hard for me not having her on the team last year because we did get really close my freshman year. But it’s just so great having her back on the team, and it’s like she was never gone.”