Softball out of Empire 8 tourney for first time 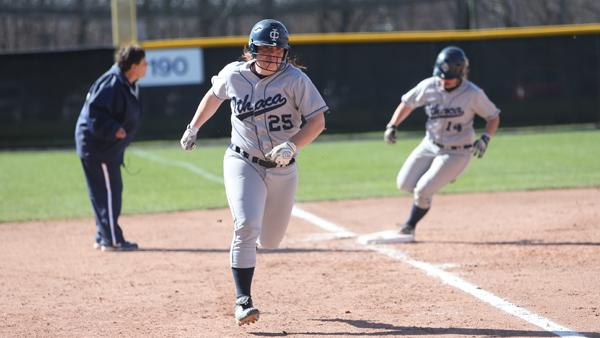 Early on this season, the softball team set a goal to defend its Empire 8 Championship title. Now, that goal has been snuffed before the conference tournament has even begun.

For the first time in conference history, the Bombers have not finished with the best record. This will be their first absence from the tournament entirely.

On April 21, the Bombers battled with Elmira College in a fight for spots in the Empire 8 tournament. The two teams battled for 12 innings before Elmira pulled out the 4-3 victory, officially bumping the Bombers into fifth place and unfamiliar territory.

“We’ve never been ‘counted out’ of a postseason,” senior infielder Molly O’Donnell said. “Not only that, we have games left to play, and we’re not really sure where we stand and whether or not we have a chance at the playoffs.”

The Empire 8 softball tournament only takes the four teams with the best conference records. After losing the tiebreaker to Alfred University, the Bombers no longer have the opportunity to defend their title as Empire 8 champions.

Head Coach Deb Pallozzi said it is a very difficult and unusual circumstance for the team, but everybody has to look forward to the remaining games, because an at-large bid is the team’s only way into the NCAA tournament.

The biggest mistake the team made during regular season conference play, O’Donnell said, was getting behind early in games and having to play from behind more times than not.

“When we give up a lot of runs early, it makes it hard on our offense to have to scrap and rally, even though we have the talent and the players to do so,” O’Donnell said. “Every time we face conference opponents, they give us their best game, because we’ve been the top team for so many years. Even though we’re not in it, it’s good to see our conference be one of the most competitive in the Northeast.”

Since 2002, St. John Fisher and the Bombers have won every Empire 8 tournament championship. The only exception was the inaugural year in 2001, when the Rochester Institute of Technology was division champion.

Fisher Head Coach Len Maiorani said a tournament without the Blue and Gold is a bittersweet feeling, because both teams have been the only squads to make the tournament every season since 2001.

“It’s different for us, because every game with them is close, and they’re a great program to match up with every year,” he said. “On the other hand, it is a bit of relief for us, because it might mean the road to the championship is a little bit easier.”

The Bomber’s road through the regular season will end with a doubleheader with Keuka College and a makeup doubleheader at the University of Rochester. After that, O’Donnell said the control of postseason play is out of their hands.

“At this point, we have to play every game like it’s our last, because even if we win out, there’s no guarantee we will be selected to play in the NCAA tournament,” she said. “We still have an expectation and hope that we still can do this, and we keep saying to ourselves ‘when there’s hope, there’s Bombers.'”