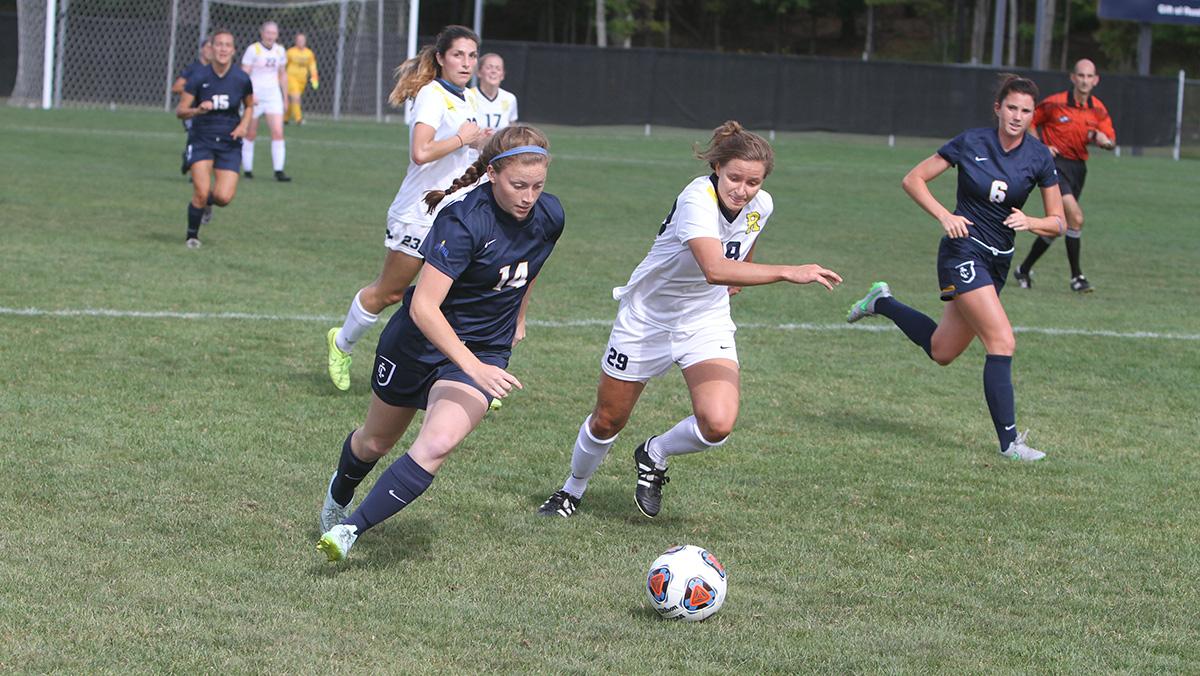 FERNANDO FERRAZ/THE ITHACAN
Sophomore Emma Oliver plays Sept. 18 against University of Rochester on Carp Wood Field. Oliver, who is back on the field after missing last season because of an injury, played 61 minutes.
By Maddison Murnane — Staff Writer
Published: October 5, 2016

When sophomore Emma Oliver entered her first year of varsity soccer preseason at Ithaca College, she was in the best shape she could be in. But instead of showing off her skill, she spent her first year as a Bomber on the sidelines in the hands of the athletic trainers.

Just a few days before the first scrimmage of the Bombers’ 2015 season, her knee began to bother her. It was not a small injury — she tore her anterior cruciate ligament (ACL) in her right knee, her dominant leg, ending her season.

“I was feeling good at practice,” she said. “I was defending someone, and I stepped to the side a little bit and I didn’t cry or fall down at all, but I stopped. I had to walk off and I was done for the practice and that’s when I tore it.”

Now, after taking a year off to rehabilitate, Oliver is consistently back in the lineup for the Bombers.

Oliver is a graduate of Guilderland High School in Guilderland Center, New York. In her senior season, she was named captain and team MVP. She also earned the honors of being named to the Division II All-Star Team. These achievements caught the eye of head women’s soccer coach Mindy Quigg. She said Oliver was the type of person, as well as player, she was looking for.

“I’ve seen her play for a couple of years, and she’s a smart player,” Quigg said. “She sees the field really well. She’s crafty with the ball, and I really liked who she was as a player and as a person.”

Her senior season in high school is where her injury stems from, Oliver said.

“Senior year I crossed a ball from end line from the right side into the box and landed on my right knee out of bounds and felt shifting and cracks,” she said. “It was the weirdest feeling ever, and I couldn’t walk. I partially tore it then, but the X-ray didn’t show it. It wasn’t even considered an ACL injury.”

When Oliver got the news that she had fully torn her ACL during soccer preseason at the college, she knew that there was no option — she had to get surgery, she said.

“I really had no choice but to get surgery if I wanted to play soccer,” she said. “The doctor said I had to get it.”

Oliver underwent ACL surgery on Oct. 12, 2015. During rehab, Oliver endured an immense amount of pain trying to regain flexibility in her knee. Although she said rehab was a lot to endure both physically and mentally, she was not in it alone.

“The team was there for me, and I was still a part of something,” Oliver said. “It really motivated me to come back because I would watch and realize how much I missed playing.”

She also had teammates going through the same process alongside her. Senior back Mallory Chick had also torn her ACL and was undergoing rehab from surgery at the same time with the help of the team athletic trainer, Courtney Gray. Chick said that through the time they spent together both rehabilitating and watching practices and games from the sideline, they developed a great but uncommon friendship.

“It was really interesting having a junior and a freshman bond together as much as we did,” Chick said. “She’s really smart both on and off the field, really funny, just a really great person to be around.”

“We were asking them [the recruits] basic questions like what they wanted their majors to be and where they were from, and we got a little off track and started learning all of this stuff about each other,” Chick said. “It was a turning point, a bonding moment for us.”

When soccer season ended and the two were done with rehabilitation for their ACLs, their friendship changed, but it did not diminish. Chick said that over the summer she checked in with Oliver to see how her summer workouts were going.

After rehab, Oliver said she had to focus on strengthening her knee and preparing to take the field next season with the Bombers.

“I didn’t feel like my body was the same anymore and I didn’t know if it was worth it,” Oliver said. “I’m glad that I kept playing but I did doubt it a lot.”

During the Bombers’ opening weekend of play in the Michelle Vargas-Robin Memorial Tournament on Sept. 3–4, Oliver recorded 26 minutes in a match against the Sage College and 23 minutes against SUNY New Paltz, helping the Bombers win both games that weekend.

Oliver has started in three of the Bombers eight games this season, and recorded 61 minutes against University of Rochester on Sept. 18, her highest this season. Chick said she came out strong in her first minutes on the field as a Bomber.

Quigg also said she is pleased with how Oliver has played this season, coming back from an injury.

“She’s just starting to make her impact this year,” she said. “She keeps our speed of play at a high intensity and is a threat in the middle and final third.”

Oliver said she is confident that she has regained her strength and that her knee will no longer affect how she plays.

“I don’t see my knee affecting me at all,” Oliver said. “My goal is to be the player I was. My main goal is to not get injured and for my body to be healthy.”