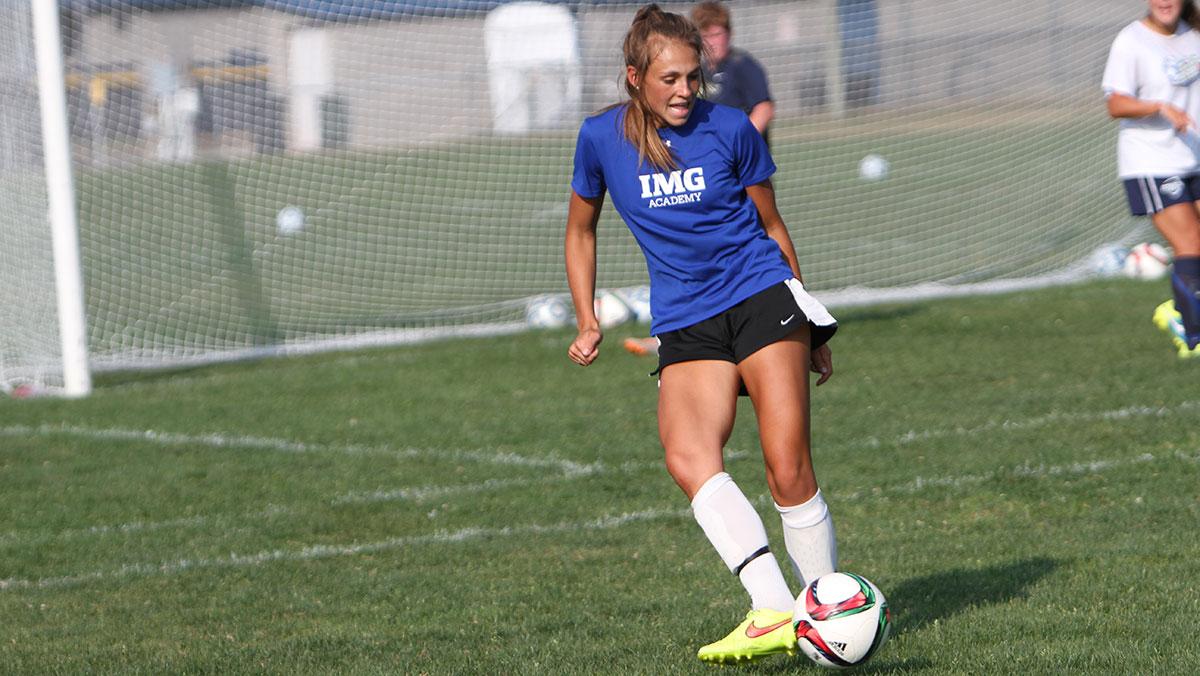 The women’s soccer team has not had a transfer student join the squad in over a decade, but sophomore Mackenzie Hinchliffe has joined the nationally ranked Bombers this season to change that statistic.

She was originally recruited as a senior in high school by head coach Mindy Quigg to play soccer at Ithaca College before she decided to attend Stony Brook University. At Stony Brook, she was redshirted for her freshman year due to an ACL tear that occurred during her senior year of high school.

Due to her unhappiness at Stony Brook, Hinchliffe decided she wanted to transfer colleges during her freshman year.

When the idea of transferring crossed her mind, Hinchliffe said, Ithaca College was the only place she looked at due to the relationship and mutual respect she had already formed with Quigg.

“I chose Ithaca … for a good balance between academics, athletics and atmosphere,” Hinchliffe said.

Hinchliffe said she has been playing soccer ever since she could run. The love she developed for the game stayed with her during her time at Hoosick Falls Central High School in Hoosick Valley, New York. In high school, soccer came naturally for her.

“It was always a stress reliever and got my mind off of everything else,” Hinchliffe said. “It was my time to go out and just do something that felt really natural.”

As a Hoosick Falls Panther, Hinchliffe produced an impressive soccer resume. She led her team to New York State Championships in 2011 and 2012, was honored as 2013 Section II Class B Player of the Year and finished her career with 70 assists, the most ever in Hoosick Falls history.

Transferring to a new school and joining an already tight-knit sophomore class on the women’s soccer team could have been a tough job, but sophomore midfielder Margaret Crowell said Hinchliffe blended in instantly.

Crowell said being Hinchliffe’s teammate was easier than expected with a transfer student.

“She is very sweet, laid back and enjoyable to be around,” Crowell said. “We welcomed her with open arms, and she came in with an open mind.”

Hinchliffe said the team’s chemistry this season is a strong point in helping it to accomplish its goals for the season.

“It [has] just been [a] very pleasant surprise how effortless team chemistry is in this program,” Hinchliffe said.

The team chemistry isn’t the only thing that has made becoming a Bomber so second nature to Hinchliffe. The goals set by the team are also her goals, she said.

“This is a very competitive program, and it’s really exciting to me that our goals can encompass such big things because of that,” Hinchliffe said. “We want to win the Empire 8 and a national championship.”

Assistant coach Jeff Long said her strong skill set and maturity are also reasons why she is a good fit for the team.

“She is adjusting well to the Bomber style and speed of play,” Long said.

The Bombers have only participated in three matches so far this season, and Hinchliffe has contributed to the midfield in two of those games. In the 6–1 win over Keuka College and the 2–1 win over Ursinus College, she has recorded 43 minutes of game time.

Hinchliffe said she wants to be able to do what is best for her team for the remainder of the season.

“I just want to impact the team as positively as possible and keep learning and improving my game,” Hinchliffe said.