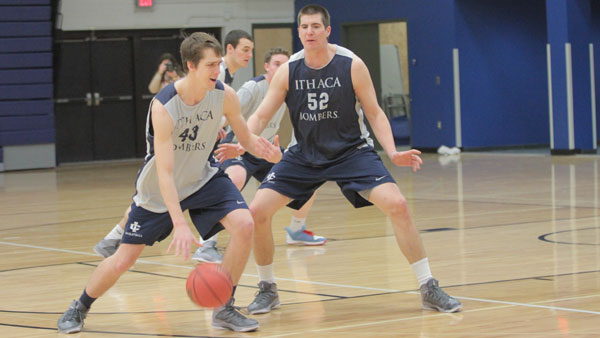 Helen Murphy
From left, junior center Keefe Gitto calls for a teammate while senior center Tom Sweeney squares up to defend him. The Bombers’ five-game losing streak is the longest since 2005.
By Jake Siegel — Staff Writer
Published: January 22, 2014

Last season, the men’s basketball team lit up the court at the beginning of Empire 8 conference play and never looked back. However, this season the Blue and Gold have been unable to share the same success as the 2012–13 squad.

The team’s youth, lack of playing experience and schematic problems have loomed over the Bombers, who are just 4–7 through 11 games. A 15-man roster filled with double-digit newcomers and underclassmen has not made it any easier for head coach Jim Mullins and his staff.

Not only have the Bombers had their worst start in two years, but through the first 11 games, five losses have come by 10 or more points this season. The clock is ticking for the Bombers, and two more losses could have them watching the Empire 8 Championship Game instead of playing in it.

Mullins believes that some game-planning troubles stem from the team’s attempt to play like the 2012 team rather than the younger team it is this season.

He said the team has already adjusted its game plan several times this season to better suit its personnel, as opposed to the historical way of selecting players who fit a specific coaching scheme, hoping for continuity.

“We have tried a few different things offensively that would serve to better suit our personnel,” he said. “At times, we have used snippets of 2–3 zone, which is something we never did in the past. We have changed our offensive up several times already to try and create that chemistry, which we haven’t done so far.”

Despite the odds against them, the Bombers’ team captains still believe their team is in playoff contention. Senior forward Frank Mitchell said the team has to play more consistently in its remaining games in order to make a post-season push late in the year.

“If you look at our games, we have had great halves and have competed with every team,” he said. “We have blown some halftime leads, which went against us. Overall, we have the potential on this team to get there, but we needed to stretch it out for all 40 minutes, not just 25.”

Playing a full 40 minutes with high energy this season has been tough for the Bombers, who have performed inconsistently, finding themselves in the predicament they are in now.

Mitchell also said the Bombers played excellent competition this year, with five of the eight teams winning at least 10 games so far. This has made in-game adjustments more difficult this season.

“When you’re playing against tough competition, it’s tough learning on the fly,” Mitchell said. “Even in your first year when everything is moving so fast, and it’s just the natural learning curve that is expected for everyone.”

The Bombers have not recorded a winning streak this season. However, the team has suffered back-to-back losses twice. The comfort the players have with one another has changed since last year, and may be one reason for the team’s struggle to maintain consistency.

“The current sophomore class saw what the upperclassmen did last year and took some of that for granted,” Mullins said.

Last season’s squad was stacked with upperclassmen who were able to capture the Empire 8 Championship and advance to the third round of the NCAA tournament, where the Bombers fell to Middlebury College by one point, 73–72, in the closing seconds.

That 2012–13 season, several freshmen received playing time off the bench and provided some solid minutes to give relief to upperclassmen who played significant minutes.

This year, if the players are taking some of last year’s success for granted, they’re unfortunately showing it too much on the court.

Senior center Tom Sweeney said the team has to adjust its goals now that the margin of error is becoming slimmer.

“Right now, we kind of have our backs up against the wall, and we have gotten out to a very slow start,” Sweeney said. “However, I believe we’ve got the talent in the room. It’s a long shot, but we do have the talent, and we could make a run and put something together as we have done it before.”