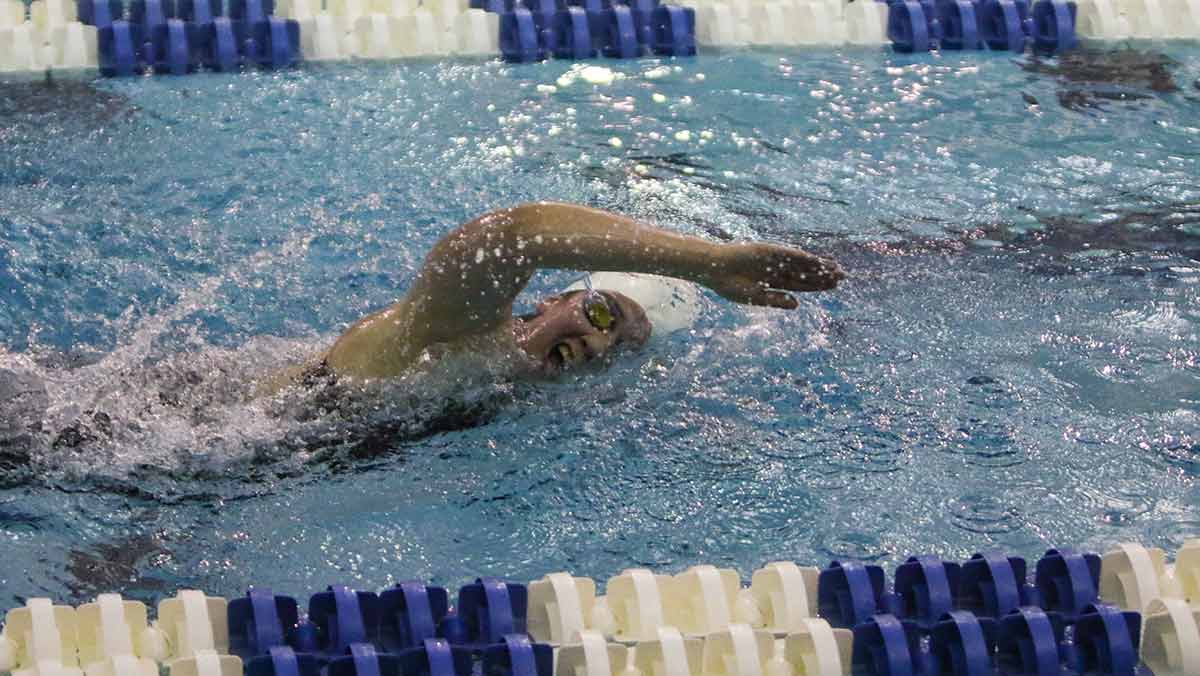 Both the men’s and women’s swimming and diving squads competed in the Upper New York State Collegiate Swimming Association Championship from Feb. 17 to Feb. 20 in the Athletics and Events Center.

After the first day of the four day meet, women’s team was in first. The team had gained 255.5 points overall and had two first-place finishes before the end of the day.

Junior Breanna Dowd got things started with a top-10 finish in the 500-yard freestyle. Then, junior Grace Ayer would go on to win the 200-yard individual medley with a time of 2:06.10, beating out 53 other swimmers.

Ayer along with junior Samantha Reilly and seniors Megan Zart and Lauren Cox would gather another first-place finish in the 200-yard medley relay, finishing with a time of 1:46.13, two seconds off the championship record of 1:44.96.

For the men’s swimming and diving team, it finished in fourth after the first day earning 233 points. Stevens Institute of Technology finished first with 383 points.

Senior Addison Hebert would continue his year-long success by finishing second in the 50-yard freestyle with a time of 21.03.

In the 200-yard medley relay, the Gold and Blue would finish fourth with a time of 1:35.01. The team consisted of sophomore Aidan Hartswick, freshmen Aaron Levin and Bradley Keith, and senior Christian Rauch.

As day two came to a close, the women’s team would tally up eight top-10 finishes, but would drop down to second place with 608 points, 34.5 points behind Rensselaer Polytechnic Institute who had a total of 642.5 points.

In the 200-yard freestyle relay, the Bombers would finish fourth overall as Cox, Zart, senior Michelle Heidgerken and freshman Jaclyn Pecze swam to a time of 1:38.04. The group was recognized for All-State honors.

In the 200-yard freestyle, Cox would earn another All-State nod as she finished seventh overall with a time of 1:57.57.

In the final event of the night, the 400-yard medley relay, Ayer, Reilly, Zart and junior Erin Hackett would finish second overall with a time of 3:55.25.

The men’s team held its fourth-place position into and through day two, coming away with two All-State nods and 488 points.

The 200-yard freestyle relay earned one of the All-State considerations and third place after the team of Levin, seniors Vincent Dodero, Jeremy Kingsley and Jonathan Husson touched the wall in 1:24.66.

The 400-yard medley relay would get the second All-State nod of the meet with the South Hill squad finishing fourth with a time of 3:29.41. The team consisted of junior Gregory Markert, Hartswick, Rauch and Kingsley.

On day three of the UNYSCSA championships, the women finished third with several top-15 finishes keeping them less than 50 points away from first place.

Ayer finished second in the 100-yard backstroke with a time of 57.68, just shy of an NCAA B mark.

Day three ended with the team of Ayer, Heidgerken, Hackett and Cox finishing third overall in the 800-yard freestyle relay with a time of 7:43.21.

Five top-ten finishes for the men’s team would keep them in fourth place.

In the B final for the 100-yard backstroke, Markert swam hard and finished just three tenths of a second off first place, claiming 12th place overall.

On the fourth and final day of states, in the men’s 100-yard freestyle, the top-eight swimmers flew through the water, and at the end of the race, Hebert and Levin finished in third and fifth, respectively.

Herbert and Levin teamed up with Dodero and Kingsley to finish third in the 400-yard freestyle relay. After that final event, the results showed the Bombers finishing in fourth place, marking their ninth top-five finish.

In his final state championship, senior Jon Yoskin said he was very proud of the final results.

“We didn’t win, but a lot of guys put up their personal bests,” Yoskin said. “It’s still a great way to close out the season.”

Belson was named Diver of the Meet as she finished first on the 3-meter event, while sophomore Lindsey Suddaby finished second.

“Everyone on this team contributed to this win,” Smertz said. “Winning states has been our goal all season, and it’s an amazing feeling having it become a reality.”

The end of the season produced quality results for both the men’s and the women’s swimming and diving teams. The women’s team finished 11–3 while the men’s finished 8–4.