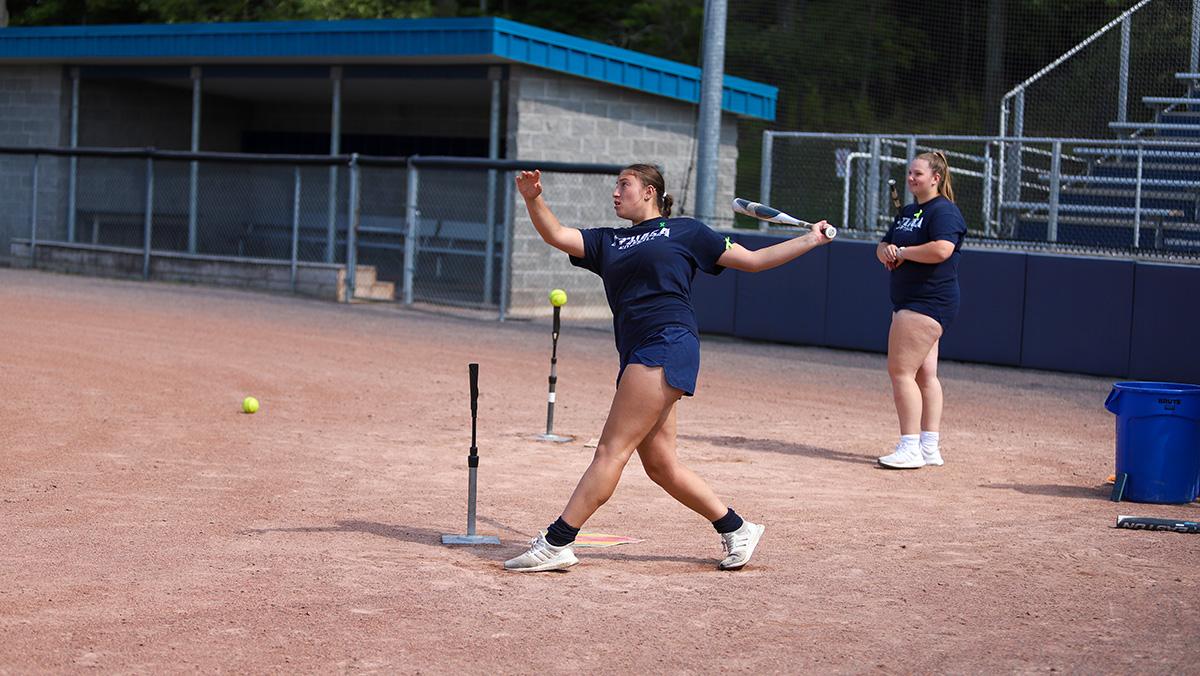 The Ithaca College softball team might not be in action until Spring 2023, but it is already getting some practice in — and letting members of the campus community take some swings, too.

Sophomore catcher and utility player Alex Cruz is one of eight campus captains at the college for The Hidden Opponent, an organization advocating for mental health in collegiate athletes. As part of the role, Cruz said she and her fellow captains, some of whom made it to the event, have to host a fundraising event once a month. The event Sept. 17 was the first one of the semester.

This month, the event was a softball home run derby at Kostrinsky Field. For $5, anyone, not just Ithaca College community members, could come and swing the bat five times, trying to hit the ball as far off the tee as they could. Cruz said 30 people attended and raised about $300, which will be donated to the American Foundation for Suicide Prevention, a group Cruz said she personally wanted to support.

“September is suicide awareness month,” Cruz said. “I struggled a lot with mental health, especially last season. So having that organization available to other athletes, I want to build more awareness so people know it’s there.”

Some were better than others at the event. While there were people who were able to hit the ball past the 220-foot center field wall, most balls landed harmlessly in the outfield grass. But everyone knew the event was not about how far you could hit the ball, it was about supporting a good cause.

Senior Lauren DePietro, who is roommates with another campus captain, senior Erin Kiley of the women’s swim team, showed up to support her roommate to show that she cares about the cause, even though she is not an athlete herself.

“I’m not on the swim team, but I live with [other members of the swim team],” DePietro said. “Supporting them and knowing that, like, I’m a person they can talk to [is important]. I’m also a coach at home, so I’m just trying to be a better coach and make sure I have the awareness of mental health.”

Cruz said one of the biggest issues she sees in mental health, especially with athletes, is the stigma they face for speaking out about issues. The Hidden Opponent was started by Victoria Garrick, a former Division I athlete at the University of Southern California, in 2019. Garrick spoke at TEDxUSC in 2017 on the topic, where she outlined the stigma she faced in coming to terms with her mental health. She also spoke at the college in 2021 as part of the Student-Athlete Advisory Council’s Mental Health Awareness Week.

Now that The Hidden Opponent is making strides to ensure no one feels that way by starting conversations and educating people about mental health, Cruz said it is important for her to make sure athletes know they can talk about their emotions.

“[Mental health] is so stigmatized that people don’t want to talk about it until it’s too late,” Cruz said. “And especially with athletes, you know, we’re taught to be mentally tough and not show emotions when we’re playing, [but we want to show] people it’s OK.”

Even some parents showed up for the cause. Linda Fabbo, the mother of junior Louis Fabbo on the baseball team, said she was at Butterfield Stadium with her husband John Fabbo for the football game against Alfred University on Sept. 17. But when her son told them there was an event going on that they should stop by, they made their way up to the field.

Linda Fabbo said she is a psychotherapist, a licensed therapist who completed psychiatric training, and between her job and having a son who has been an athlete his whole life, she said she knows plenty about mental health and the stigma behind it.

“It’s been an ongoing conversation for a long time just with high school students about pressure and understanding that on social media, not everything looks as it is,” Fabbo said.

The support from fellow athletes and teammates has been outstanding, Kiley said. She has not hosted an event yet, but she said she has some ideas and is excited about the opportunity.

“I think we’re going to all work together a lot to plan events like this and get the whole team involved,” Kiley said. “I want to get a swim meet involved and get my team involved, because I know they care a lot too.”

Senior Lauren Brady, another member of the swim team who showed up to support Kiley and the organization, said she has first-hand experience with mental health struggles and that she just wants to make sure her teammates have a support system.

“I’ve swam ever since I was little,” Brady said. “Every single one of my teammates has dealt with mental illness from high school to college, myself included. I think it’s really important.”