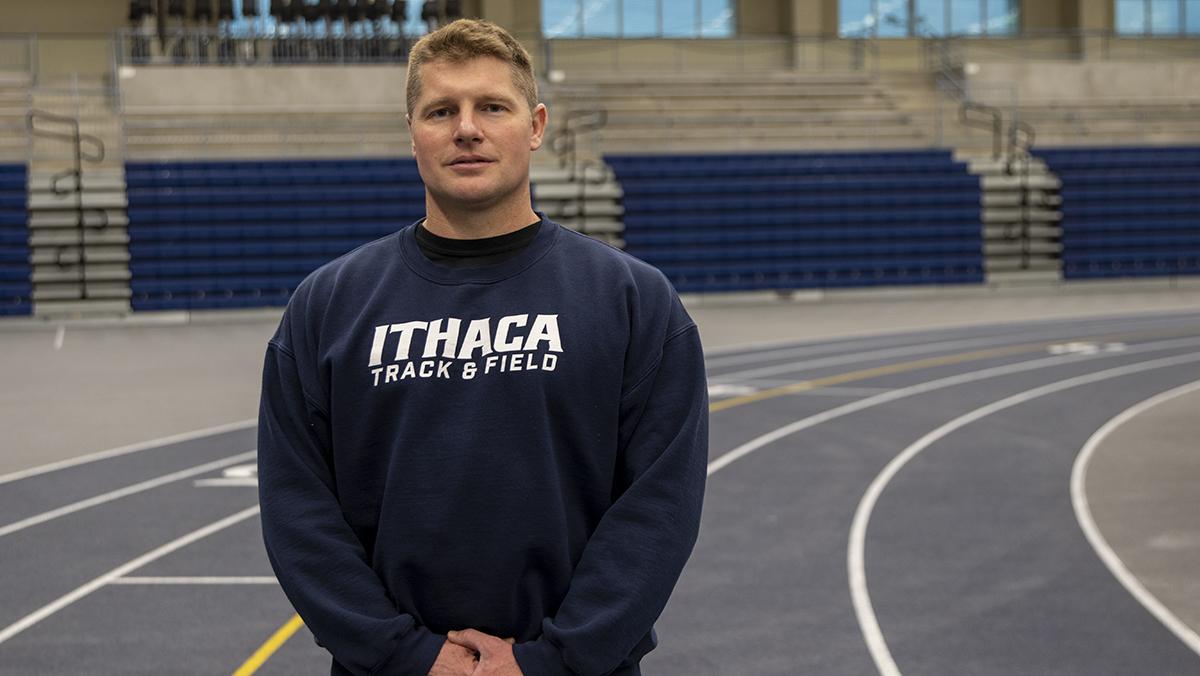 Matt Scheffler, assistant coach for the Ithaca College men’s and women’s track and field teams, never thought he was going to coach pole vaulting at the collegiate level. He enjoyed working with high school athletes, but never thought he would move to being a college coach.

But after persistence from Jim Nichols and Jennifer Potter, the head coaches of the men’s and women’s track and field teams, Scheffler agreed to work with the college part time. In 2022, following an indoor season that saw three Bombers finish in the top 10 at women’s nationals, Scheffler was honored with the United States Track & Field and Cross-Country College Association (USTFCCCA) National Women’s Assistant Coach of the Year award.

For Scheffler, an award like this is very humbling because he knows the other coaches around the country who also could have won it. He said he just does his best to make the athletes perform their best.

“It’s not something that was ever expected or anything I was ever working toward,” Scheffler said. “I just go [to Ithaca College] to coach and do the best I can for the athletes, and they do a great job. … Just to get something without ever thinking about getting something is rewarding.”

While Scheffler does work with the men’s and women’s pole vaulters at the college, he also works as a physical education teacher in Lansing, New York, and runs the Tompkins County Pole Vault Club that, he said, people drive upward of two hours to attend.

But even with all the other work he does, Scheffler still helps each athlete at the college be successful. At the indoor nationals, senior Meghan Matheny took first for her second national title and sophomore Sara Altonen finished in third. Junior Martha Kemp-Neilson also landed in 10th.

Matheny said Scheffler’s coaching style is all about the individual athlete, not the sport as a whole. She said her jump technique is different from Altonen’s and Kemp-Neilson’s, which means Scheffler will have to customize his coaching for each of the athletes if they really want to succeed.

“He doesn’t blanket-coach,” Matheny said. “He coaches to each individual athlete’s strengths and weaknesses … and he is also really good at being in-tune with how you’re feeling, not just physically but mentally.”

Scheffler’s coaching style has led him to much success over his 16-year career with the college. 2022 was the first time he won the national award, but he has been named the Regional Women’s Assistant Coach of the Year three times in 2016, 2017 and 2021. He was also named the Collegiate Coach of the Year in 2018 at the National Pole Vault Summit after coaching Katherine Pitman ’18 to one of the greatest women’s pole vault seasons in Division III history.

Pitman’s historic 2018 saw her break her own Division III national record twice, and she currently owns seven of the top 10 highest jumps in the division. But despite the incredible success she saw at the college, Pitman was a walk-on with the team in her sophomore season who had never done the pole vault before and credits Scheffler for her dominance.

“I think Matt saw something in me that I never saw in myself or even imagined in myself,” Pitman said. “I don’t think you’ll find someone that’s a more knowledgeable individual about pole vault.”

For all the talk about his coaching style, it might come as a surprise to some that Scheffler was self-taught in the event. While he jumped in high school and college at SUNY Brockport, he mostly learned the sport on his own. But he said he thinks his history of trial and error and self-reflection are what makes him a better coach because he knows what not to waste time on.

“You learn while doing [for] a lot of things,” Scheffler said. “You learn what works, and you learn no two athletes are the same ever, but there are a lot of similarities and things, so you can apply things that you’ve learned from other athletes to your current athletes.”

Scheffler acknowledges that the current top three women on the team have very different techniques, which means he needs to really mold his coaching to fit each of them individually.

“One thing that will work for one might not be so effective for another,” Scheffler said. “[For example], Sara [Altonen] is a tuck-and-shoot-style vaulter, and most of the other vaulters we have are straight leg swing vaulters. But it’s not something I would change on Sara, I think that’s a strength to her … but I don’t coach the same thing to Meghan or Martha.”

Altonen said the other thing that makes Scheffler great is his belief in all his athletes. If she has a bad practice or competition, Scheffler will always find a way to give her a confidence boost and make her believe she can do better next time.

All of Scheffler’s athletes credit him with helping them, but Scheffler said they have helped him become better as a coach and teacher. While the recent programs have had success for men and women, he said he knows it would not have happened without the work put in by past teams.

“Everything that I’ve learned as a coach has come from all those athletes prior,” Scheffler said. “They might not have had all the glory that the recent ones have, but that glory is definitely a result of how they did in the past.”