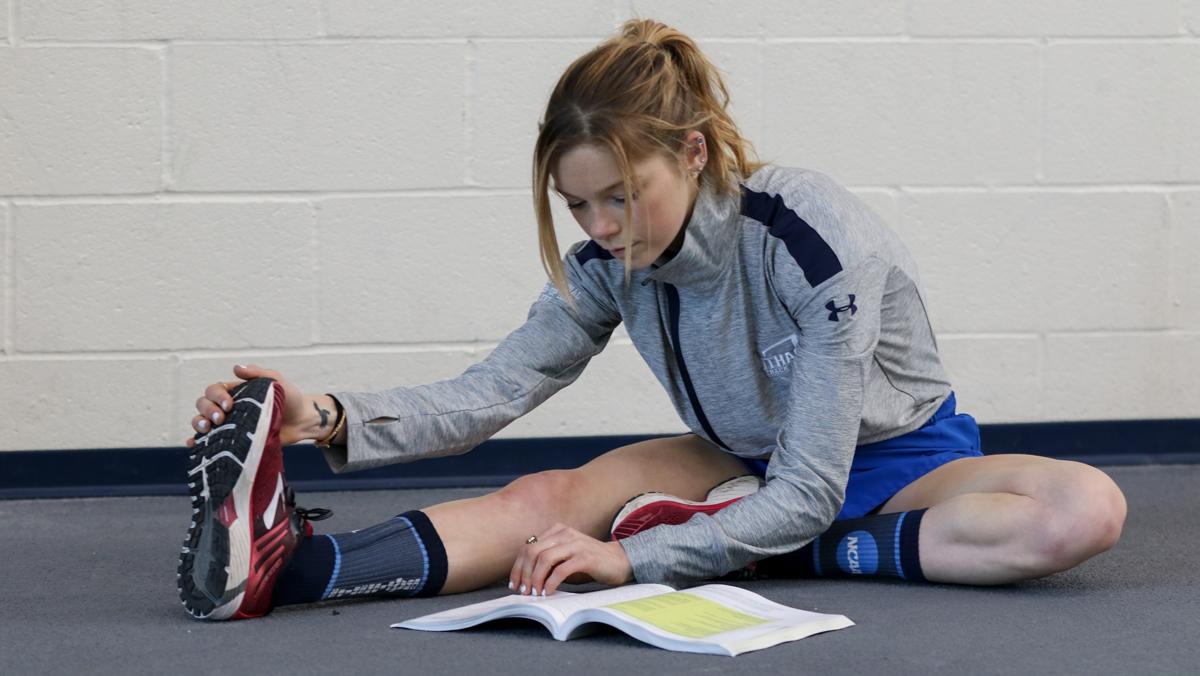 CAITIE IHRIG/THE ITHACAN
During the academic year, senior Taryn Cordani and other members of the cross country and track and field teams balance their schedules between a year-round schedule consisting of academics and athletics.
By Jack Murray — Staff Writer
Published: January 24, 2018

The athletes have extremely busy schedules, and free time is not really a part of their lifestyle. Senior Taryn Cordani said her intense schedule does not leave much time for anything besides school and practices.

“If I’m not at practice, I’m volunteering, doing homework or at a club meeting,” Cordani said. “I don’t really have time to ‘relax’ but that’s okay with me.”

The constant in-season mindset is a necessity for these athletes to find success, both on the field and in the classroom. These athletes must budget their time and plan their weeks around practices and meets. Sophomore Jessica Fritzsch said the constant schedule has led to better organization.

“It’s not too difficult juggling classwork and meets,” Fritzsch said. “We’re all actually forced to have good time management skills, and both coaches and professors are very accommodating when we have conflicts.”

The cross-country and track and field teams at the college are extremely academically and athletically focused, Dinan said. They balance their schedules so they can perform at a high level in the classroom and during their meets at any given time. Junior John Blake said that staying focused is key to managing academics and athletics.

“It can be challenging academically, but is overall manageable,” Blake said. “Most people do a fine job handling the commitment. It just means that you have to stay focused on your work when you aren’t at practice so the two don’t interfere.”

During their off-season, athletes in other sports do not practice every day, and teams do not have to travel constantly for away games.

Athletes participating in any sport miss class time in order to compete in games and meets. Runners have to commit themselves to staying academically ahead in anticipation of missing class time throughout the year. Cordani said away meets do not affect her grades since she keeps a routine.

“I have to commit myself to being at a meet almost every Saturday,” Cordani said. “After my long run on Sunday mornings, I usually spend the day doing homework at a coffee shop.”

Cordani said she misses Friday classes somewhat often to travel to away meets on Saturdays. She said that for nationals and other championships, the teams can leave as early as Wednesday, causing her to miss more classes.

The nature of these sports differs between seasons. Track and field places a higher emphasis on the individuals themselves, while cross-country tends to focus on the team as a whole.

“There is absolutely a different feel between the two seasons,” Dinan said. “One of the biggest things is that cross-country is more team-oriented, when track has more room for individual success.”

Sophomore Garrett Bampos said the runners have developed an extremely close friendship because they all compete in both sports.

“The bond is essential,” Bampos said. “I spend every day with these guys and know them best as my second family.”

There are certain disadvantages that runners face, specifically with injuries. Bampos said that because of the year-round training, he developed a painful knee injury called patellofemoral pain syndrome.

“The schedule definitely gets tough and can wear you down,” Bampos said. “If anything, the constant training can cause overuse injuries which I’ve experienced firsthand.”

Although these athletes are constantly on the in-season grind, many of them flourish, and wouldn’t trade their experiences for anything.

“It’s tiring to balance a sport with school no matter how many seasons an athlete does,” Fritzsch said. “I’m happy to be doing three seasons because it just means having more time I can spend with my teammates, coaches and doing a sport that I love.”