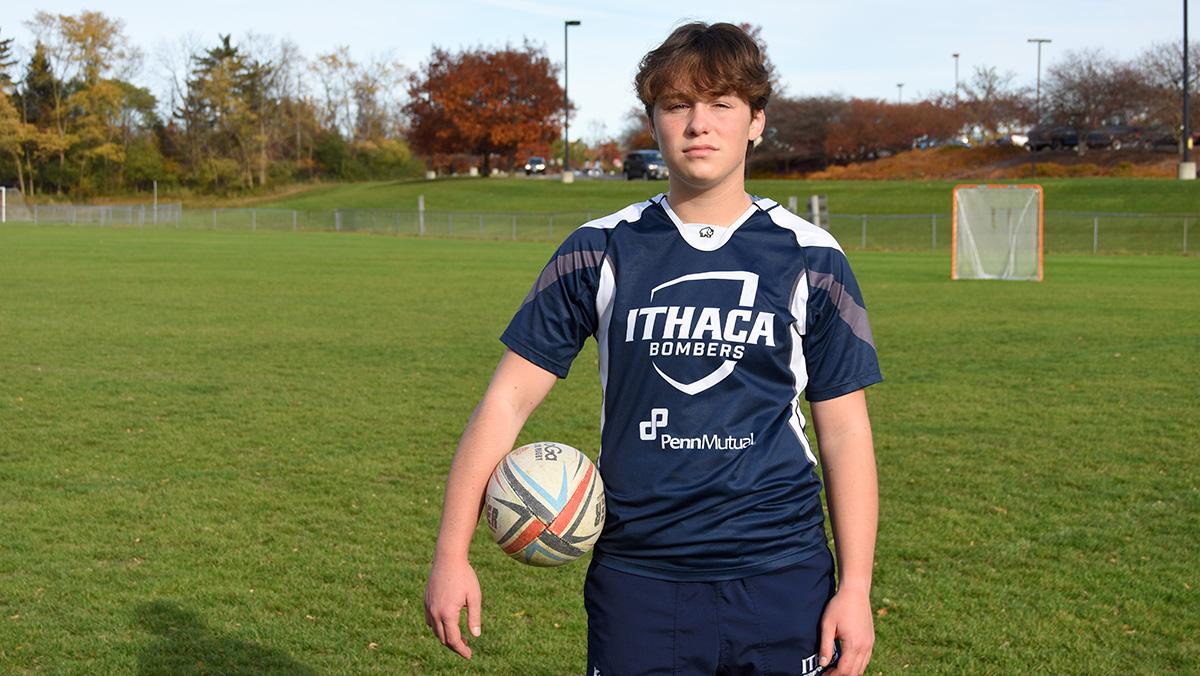 In the fall of 2021, first-year student August Donato was expecting to be at Fordham University, where he had been given a scholarship to compete on the Division I rowing team. Instead, he is at Ithaca College playing on the men’s club rugby team — a sport he had never tried before being approached by the team early in Fall 2022.

Donato came out as transgender earlier this year and has been on testosterone treatment since August. His scholarship at Fordham was for the women’s rowing team, and the university does not offer a men’s team. Because of NCAA rules, Donato could not use testosterone treatment if he was competing on a women’s team, so he would have to choose between being on the team or being open about his identity.

“It took me a while [to figure out what I wanted to do],” Donato said. “I initially committed verbally to Fordham, I even signed a contract. The contract didn’t end up going through, which basically saved my life, because that ended up letting me come here and actually medically transition.”

Senior Nick Bikah, one of the captains on the rugby team, had nothing but praise for Donato. He said no matter what, Donato is just like any other member of the team.

“Everybody loves [Donato],” Bikah said. “He’s smaller, but still has the heart. Every time he gets hit, he still gets back up. He’s never whining about anything.”

Donato said he would have stayed at Fordham but could not afford the school without the athletic scholarship. Even once he decided to come to Ithaca College, he had considered joining the men’s rowing team but opted not to because of how early in the transition process he was.

“[Rowing at the college] didn’t seem like the right environment for me,” Donato said. “I might go back to rowing next year, I haven’t decided yet. I’m also just quite short for rowing, anyways.”

But the topic goes far beyond just South Hill. In March 2022, Lia Thomas made headlines after winning the Division I national championship as a transgender athlete, sparking national debates. Athletes at the Tokyo Olympics in 2021 also drew international attention and more debate.

Donato said it was difficult for him to make his decision, considering what he could or could not do after beginning treatment, and said he does not think other people should have to make that choice.

“I think it’s kind of unfair,” Donato said. “I actually had to come out earlier than I wanted to, earlier than I was ready to. It was an adjustment period. But I knew if I signed a contract for four years, I wasn’t going to be able to medically transition … and it was too difficult for me not to transition.”

Junior club president Sammy Harig said, at the club’s level, there are no rule changes or other differences when it comes to having transgender athletes on the team or in the league.

Even though rugby is a physical sport, Bikah said he wants the campus community to know anyone can join, and he feels that having players like Donato on the roster shows that.

“I know there would probably be some people on the team that joined when they were [first-year students] that weren’t comfortable coming out,” Bikah said. “I think now that they see that our whole club is accepting of everything, I feel like we’ll get more people to [join].”

Senior Steven Zucker, the other team captain, said head coach Annemarie Farrell plays a large part in building the culture around the men’s team and keeping the bond strong among all the players.

“It really all stems from [Farrell]; she does a great job of enforcing this sense of community,” Zucker said. “And yeah, rugby’s a physical sport, but it’s a lot of fun, especially when you get the hang of it and you’re doing it with the people you like to do it with.”

Like Zucker, Donato said Farrell has made an effort to make sure he feels supported on the team. Although Farrell has been gone for part of the semester — she is serving as the team manager for the USA Women’s Rugby World Cup team in New Zealand, which began Sept. 8 and ended for Farrell on Oct. 29 with Team USA’s quarterfinal defeat — Donato said the two of them spoke earlier in the semester.

“[Farrell] is amazing,” Donato said. “She kind of, like, after some practices, pulled me off and we talked about gender, what I’m comfortable with, things like shirts versus skins.”

Although shirts versus skins was something the team had done for years and is a common practice in sports, Bikah said it was a simple switch that really makes no difference. Now, the athletes use pinnies or tuck their shirts in to denote which team they are on in a scrimmage.

The acceptance on the team is something Donato said he feels is reflected by the rest of campus. He said he feels like he can be himself at the college, regardless of what sport he is playing.

“Ithaca [College] is very open-minded,” Donato said. “It’s an open place where people can be who they want to be. … It’s a very accepting place to be.”

The Ithaca College Center for LGBT Education, Outreach & Services held events during the month of October to celebrate LGBTQ+ history month. The college has a 5/5 star rating on the Campus Pride Index for being inclusive to LGBTQ+ students.

Both Zucker and Donato said there were other members of the team who identified as transgender or gender-nonconforming, but they declined to mention who out of respect for their privacy. Zucker said the main goal for the team is to have an enjoyable experience, and being inclusive and welcoming is part of that.

Harig said the group is as tight-knit as ever, and he is happy to have Donato on the team. The team stays close during the season by spending time together and doing activities outside of practice.

No matter what his future at the college holds, Donato said he wants to make sure every transgender athlete makes the decision that is right for them. He made the choice to give up a varsity sport, but he said that does not mean it is what everybody should do, because every situation is different.

“If a person really loves their sport, where they’d like to postpone medical transition to play, and that’s cool with them, they’re still as valid as somebody who decides to do a new sport to medically transition,” Donato said. “Whatever your journey is, it’s valid.”

The NCAA must protect the athletes it claims to support