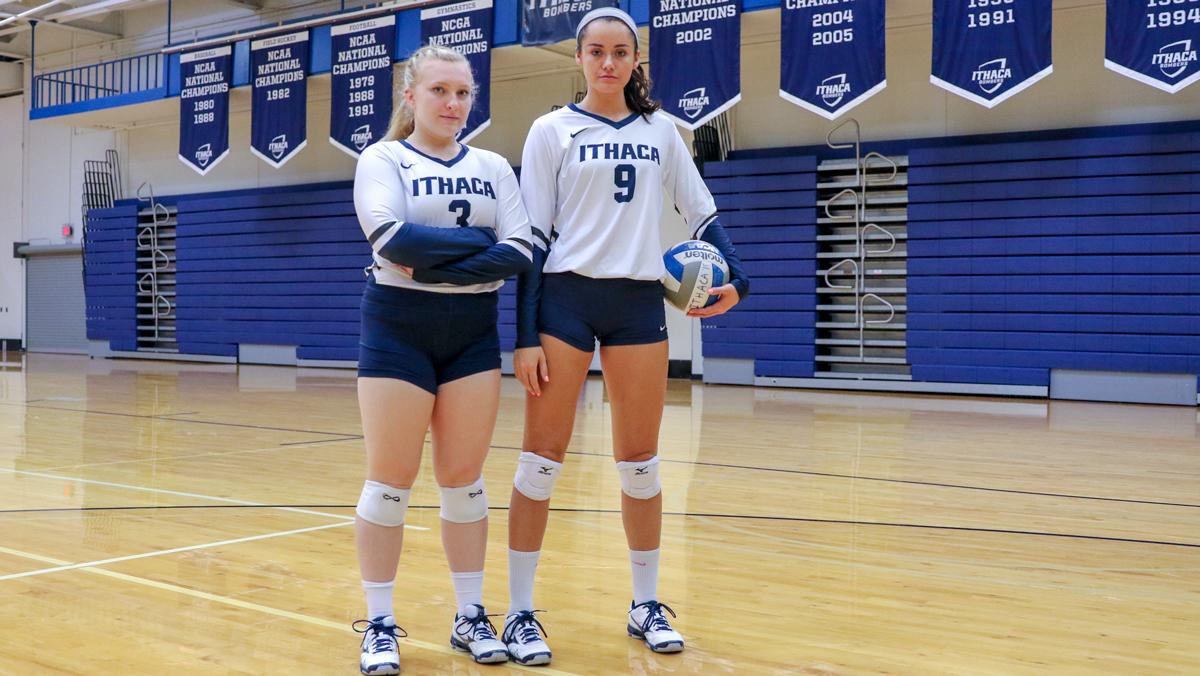 In an attempt to build off of last season’s successes, the Ithaca College volleyball team is setting its sights well beyond making it back to the NCAA tournament.

Last season, the Bombers finished with a 25–9 record overall, but the 2017 season ended with a heartbreaking loss in the final four of the NCAA tournament to Claremont-Mudd-Scripps Colleges. Coming off of a year in which the Blue and Gold had such tremendous success, the team — which is currently ranked eighth in the nation for Division III — is now planning how it will get back to the Final Four in a new season.

Senior middle-hitter Amanda Cerruti said that she has her mind cleared and is ready for the challenges ahead.

“Ithaca volleyball in general has the goal of winning a national championship,” Cerruti said. “Whether it’s the 2018 season or in 2025, that’s our goal. It’d be great to do that this season, but everything we do now is to shape Ithaca volleyball and get us on the map. I think we started to do that the past couple of years and we’re only aiming to go up from here.”

The Bombers have been a fixture in the NCAA tournament for the past three seasons, but last year’s final four berth was a big breakthrough for the team. In 2015 and 2016, the Blue and Gold were eliminated in the Round of 32. Heading into the season ranked in the top ten and continuing to have other highly ranked opponents on their schedule, the Bombers will again have a chance to make a statement.

Last year marked the Blue and Gold’s first season in the Liberty League conference, and posted a 6–1 regular season conference record, allowing the team to to make it to the final in the conference championship. However, after breezing through the semifinal, the Blue and Gold lost a tough game to Clarkson University in the final set on their home court. Head coach Johan Dulfer said he uses that loss as a way to get his team focused on the new year.

“Last year served as a huge motivator for us,” Dulfer said. “I don’t think anyone has forgotten our success, but they also remember the sting of defeat in our conference finals against Clarkson. We have lots of room for improvement in so many areas. That’s part of the excitement of looking ahead for our program.”

The Blue and Gold will have to face some challenging opponents in the 2018 season, but junior setter Caitlyn Floyd said she is not concerned with one game specifically, but rather, the season as a whole.

“We have a lot of good teams on our schedule this year,” Floyd said. “We play a few nationally ranked teams as well as teams that will be ranked regionally. There isn’t a game I’m looking forward to the most, because each team brings something different and I enjoy every chance I have to play with this group.”

The Bombers will have to deal with the loss of five key seniors this season. The volleyball program added five new freshmen to replace the players that they lost to graduation, but will still need to look for other teammates to lead the way this season.

“No single player can carry a team,” Dulfer said. “That might be a cliché, but it’s true. So as a program we don’t single out players, but as a coach I hope that the returners as a group can fill some of the leadership void that our graduated class has left. Every year this is filled in differently and I’m excited about what the new group will bring to the table. Everyone adds something to the mix.”

The Bombers will open the season with the Bomber Invitational in Ben Light Gymnasium on Aug. 31 when they host Calvin College in their first game. Calvin was another member of the final four last season and is coming into the year as the second ranked team in Division III volleyball. The Blue and Gold also played Calvin last season on the road and lost in four sets.

The Bomber invitational will finish up with a matchup against Stevens College, which was a rival team of the Bombers when the Blue and Gold were in the Empire 8. The season is just around the corner and Dulfer said he is excited for what the 2018 season has in store.

“Our goals are to play for a Liberty League championship,” Dulfer said. “And, ultimately, the national championship. That won’t change. But I’m also hopeful that we can enjoy the ride as we try for those things.”