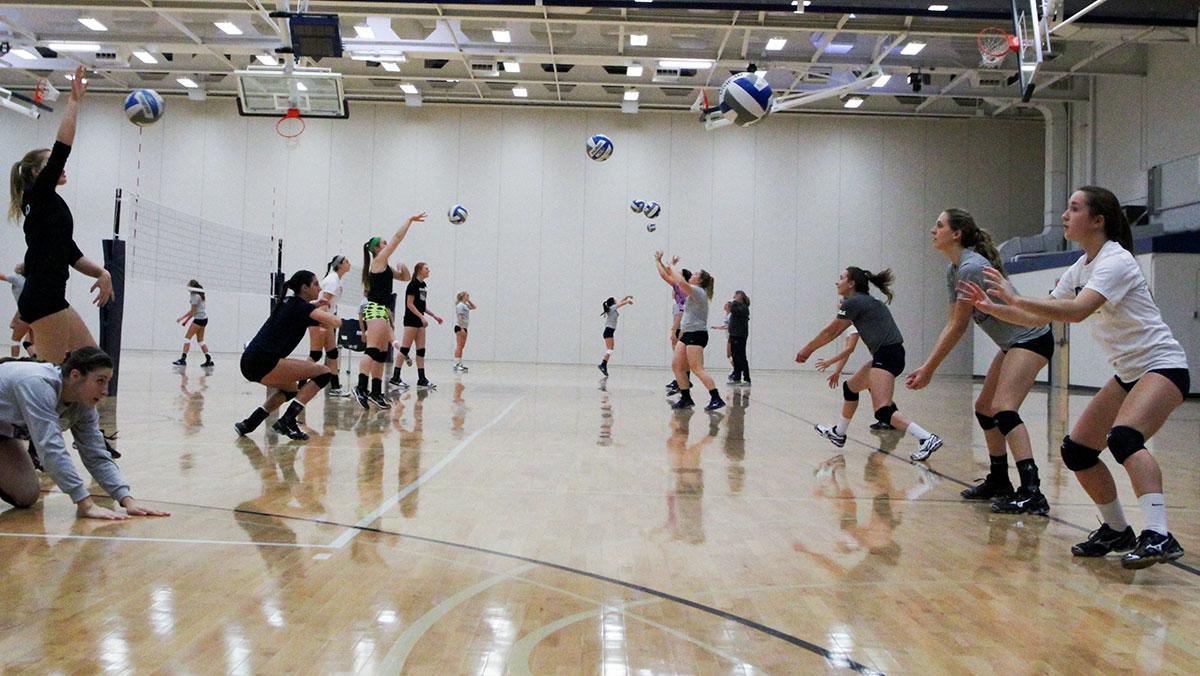 A group of 22 high school volleyball players made their way into Ben Light Gymnasium in the Hill Center on Oct. 12, to try and leave a lasting impression on volleyball head coach Janet Donovan.

The Ithaca College team’s annual Fall Clinic gave the high school athletes an opportunity to show their skills to Donovan, the rest of the Bombers coaching staff and current players. Donovan said she was pleased with the high level of talent and the attitude that the high school players brought to the clinic.

“It was a fantastic clinic,” Donovan said. “I told the group that this was the most talent that we’ve had in our gym for this clinic in the last three years. I was very pleased with it. They are very talented kids with great attitude and wonderful energy.”

Current freshmen Joelle Goldstein and Kayla Gromen both attended last year’s clinic. Gromen said what she really took away from the clinic last year was how fast and up-tempo the drills were. Gromen, a setter and libero from Hempfield High School in Landisville, Pennsylvania, said she was always set on schools in Ohio, never imagining Ithaca College would be her final destination.

“I took a bunch of surveys that matched me up with the perfect college, and Ithaca was always top choice,” Gromen said. “Since I love Ohio and really wanted to go to school in Ohio, I wasn’t quite sure. My parents eventually said, ‘Just check Ithaca out, it can’t hurt,’ and once I did, I loved it.”

Goldstein, an outside hitter who attended Kings Park High School in Kings Park, New York, said she knew since her junior year that the college was a good fit for her, not only for volleyball, but also lacrosse. She said one of the main reasons was because of Donovan and how approachable she is.

“Janet would come to my games and speak to me individually,” Goldstein said. “She kind of made an effort to make herself familiar with me. That was also one of the reasons I decided to come. I knew she wanted me and expressed it with text messages and emails to check up on me. Having a personal relationship with a coach is a pretty big deal.”

Gromen said Donovan’s positive energy and willingness to help direct a player in the right direction are some of her best attributes.

“You aren’t just another player on the team to her,” Gromen said. “Coach makes each of us feel important and really cares about us as people.”

Goldstein said an incoming recruit who is interested in the Bombers typically surveys the roster and checks the team’s recent success. She said having several seniors graduate from her preferred position provided her with added motivation to join the Blue and Gold.

“You can ask anybody, I was freaking out,” Goldstein said. “I looked at the roster and noticed a few of the outside hitters were graduating, so I knew that was an opening. I was a freak about it, but you really can’t psych yourself out. You just have to go out there and play.”

Donovan, Gromen and Goldstein also spoke highly about the college from academic and social standpoints. Gromen believes the school itself and the surrounding area are what make recruits want to come here to play and attend this school. Gromen said she would be comfortable staying at the college if she wasn’t able to play volleyball.

“One of the factors that went into my college choice was me thinking if I end up not liking volleyball or I get hurt was, ‘Would I still stay at this school?’” Gromen said. “Every time, I said yes.”

Donovan said all of these factors significantly help the college attract incoming student-athletes to become Bombers.

“This school is phenomenal,” Donovan said. “We’ve got top majors, and it’s absolutely gorgeous. It’s just a great place to be a student-athlete.”