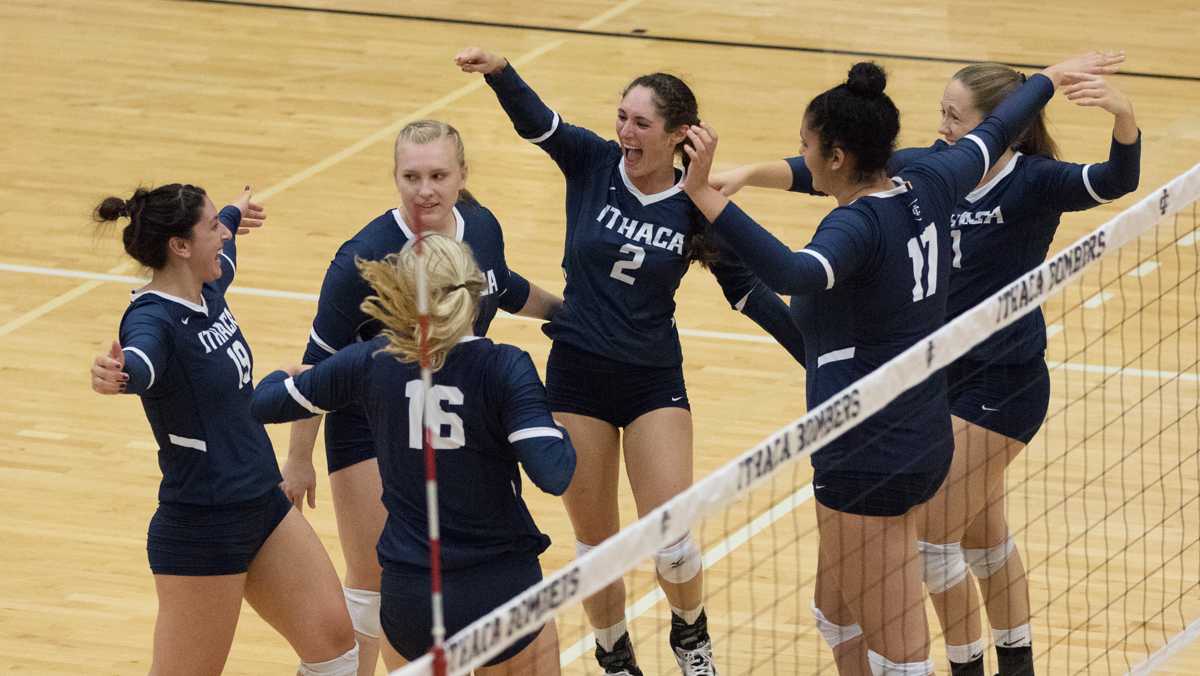 CAITIE IHRIG/THE ITHACAN
he volleyball team celebrates together after scoring during its game against Alfred University on Sept. 30. The Bombers defeated the Saxons 3–0 with scores of 25–9, 25–9 and 25–13 in Ben Light Gymnasium.
By Lorenzo DeScala — Staff Writer
Published: November 15, 2017

The Ithaca College women’s volleyball team claimed the title of Regional Champion after defeating Babson College 3–1 Nov. 12 and punched its ticket to the NCAA Division III quarterfinals in Grand Rapids, Michigan. This is the furthest the South Hill Squad has advanced since the 1999 season when they lost to Trinity University 3–0 in the quarterfinals.

Prior to being selected for the NCAA Division III volleyball tournament, the Bombers’ were fresh off a 3–2 loss to Clarkson University in the Liberty League Championship on Nov. 4 in the Ben Light Gymnasium. The Blue and Gold entered the Liberty League tournament ranked first in the conference with a 20–7 record.

Senior outside hitter Joelle Goldstein said losing the Liberty League Championship game was a wake-up call for her and her teammates because it taught them to never take a game for granted.

“Fortunately, that wasn’t our last game together and we were given another chance,” Goldstein said. “I definitely think everyone hung on to those feelings after we lost and used them as motivation and drive to do better and prove that we belong in the tournament.”

The Bombers faced a difficult journey to reach the quarterfinals after receiving one of the 21 at–large bids into the tournament. In the opening round of the NCAA tournament, the Blue and Gold faced the 22–10 Endicott College Gulls, who captured their second straight Commonwealth Coast Conference Championship and were winners of their last 10 games.

Trying to turn a page on their previous defeat, the South Hill squad came out firing, and the Gulls were left defenseless. The Bombers swept Endicott in three sets, 25–17, 25–20 and 25–17. Junior middle hitter Amanda Cerruti and junior outside hitter Katie Evans led the attack for the South Hill squad with nine kills each. Sophomore setter Caitlyn Floyd facilitated the offense with a match–high of 31 assists, while junior libero Tara Stilwell led the defensive front with 17 digs.

In the second round of the tournament, the Bombers faced off against old rival Stevens Institute of Technology. Stevens was this year’s Empire 8 champion after the Bombers won the tournament the last two years. The Ducks appeared to have the edge on their old conference rivals winning the first set 25–20. The South Hill squad rallied to win the next three sets 25–19, 28–26 and 25–17. Cerruti once again paved the way for the offense with 17 kills, and freshman middle hitter Reagan Stone chipped in another 13 kills. Floyd continued providing assists for the Bombers, racking up 54 assists. Stilwell and Goldstein were the defensive leaders, leading the team with 20 and 17 digs, respectively.

In the Regional Championship, the Blue and Gold won 3–1 against Babson College. The Bombers won the first set 25–17 but then had a 23–25 slip–up in the second set. They went on to win the third and fourth sets 25–20 and 25–15 respectively, and earned the right to play in the quarterfinals. Stone took the lead in the offense, leading the team with 12 kills. Floyd continued her successful postseason, leading the Bombers with 40 assists, and Stilwell once again paced the team with 18 digs.

Senior defensive specialist Kayla Gromen said that having a tough schedule has helped the team with their postseason run.

“This allowed us to really be ready for postseason, since we were already up against tough competition all year,” Gromen said.

Stilwell said that mental toughness helps the team move on from the Liberty League loss.

“I think the team was upset with the Liberty League loss, and we turned it into motivation during the tournament,” Stilwell said. “We called it our ‘second life.’ We are preparing how we always do — focusing on what we can control.”

Goldstein said the Bombers are treating the NCAA quarterfinal game against Emory University on Nov. 16 the same as any other.

“We know what works, so we’ll stick to it and rely on our individual and team strengths,” she said. “Emory is a talented team, so we just have to bring our A-game right from the start, find their weakness and capitalize on it.”

Head coach Johan Dulfer said the team is preparing by practicing for an hour and discussing the game plan before the match.

“The only difference with the Elite Eight is that there will be a banquet to celebrate our accomplishments with all teams attending,” he said. “That’s a unique event for everyone and makes you realize how special this accomplishment really is.”

Goldstein said she knows this could be her last match in a Bombers’ uniform, but cannot imagine a better season to go out on.

“Through the ups and the downs, this team has shown the greatest resiliency and determination to prove everyone wrong and show that a New York team can be a contender for a National Championship,” she said. “No matter what happens this weekend, I am so proud to be a part of this team and to have shared all these amazing memories. We made history this past weekend, but we’re not finished yet.”