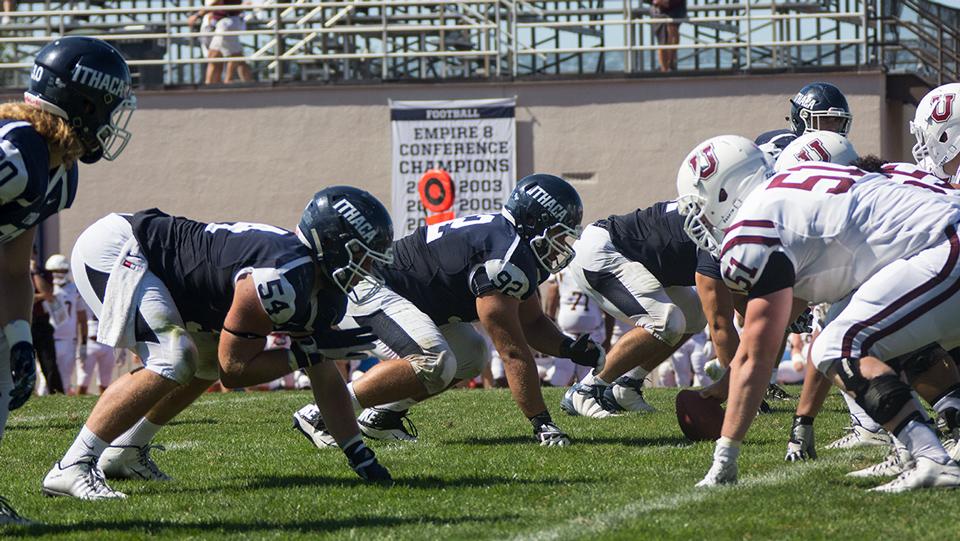 CAITIE IHRIG/THE ITHACAN
The Bombers defense sets up on the line against Union College in their home opener Sept. 3 at Jim Butterfield Stadium.
By Adam Brobst — Staff Writer
Published: September 29, 2016

After back-to-back loses, the Ithaca College football team looks to get back to it’s winning ways with an Empire 8 conference matchup against undefeated Utica College at Jim Butterfield Stadium on Oct. 1. The Pioneers average about 31.5 points a game. However, the Bombers boasts a defense that has been holding opposing offense to about 17 points a game. The game kicks off at 1 p.m.

Men’s soccer will be taking their 4–4 record to Utica College at 1 p.m. Oct. 1 in Utica, New York. The Blue and Gold are lead by sophomore midfielder Nathan Schoen, who has three goals on the season. The defense is anchored by senior goalkeeper Zach Jacobsen, who has a save percentage of .750. The Bombers also look to improve to 3–0 in the Empire 8.

Empire 8 player of the week junior Denise Ibarra leads the women’s cross-country team into the Lehigh University Invitational at 12:15 p.m. Oct. 1 in Bethlehem, Pennsylvania. The Bombers placed 8th in their last meet in the Williams College Purple Valley invite.

The men’s cross-country team will also be headed to Bethlehem to participate in the Lehigh University Invitational.

Junior golfer Indiana Jones was named the Empire 8 player of the week for her performance at the Martin-Wallace Invitational Sept. 24–25. She will be leading the team into the Empire 8 championship this weekend, which will be played on Oct. 1–2 at the Country Club of Ithaca.

Women’s tennis has a match at 1 p.m. Oct. 1 against Nazareth College in Rochester, New York.

Sculling will also be competing in its second regatta at 11 a.m. Oct. 2 at the Green Mountain Head Regatta in Putney, Vermont.