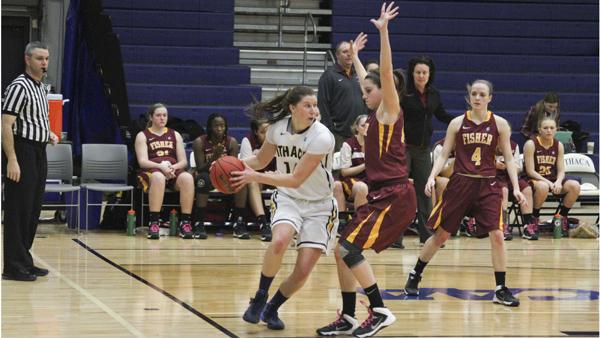 The Blue and Gold shot nearly 46 percent from the floor and converted close to 90 percent of their free throws. Meanwhile, the Cardinals were held to 30 percent in shooting. Ferguson said the Bombers energy on defense carried over in a fast break offense.

“Our key was to get stops on defense, get the rebound and push and score in transition — that’s when we are at our best,” she said. “We played inside-out, and everybody was contributing.”

With a 6–5 Empire 8 record heading into the game, St. John Fisher was still in contention for post-season play. Junior forward Geena Brady said the victory was important because it knocked out the opposing team that was fighting for an Empire 8 Conference Tournament spot.

“They were gunning for us, and it was great to make a statement like this, winning by nearly 40 points,” she said.

Now winners of 10 straight games, the Bombers improved their conference record to 10–1. They are still fighting for the right to host the conference tournament with Hartwick College, which has an 11–1 conference record.

Head coach Dan Raymond said the late-season momentum the team is building will be vital to its success as the season continues.

“We can’t afford any stumbles along the way here,” he said. “The confidence that the whole team is starting to build on each time that we play enables us to take one more step — and that’s what we’re looking to do, just continue improving.”

The Blue and Gold will host conference foes Elmira College and Utica College at 8 p.m. Feb. 14 and 4 p.m. Feb. 15, respectively.