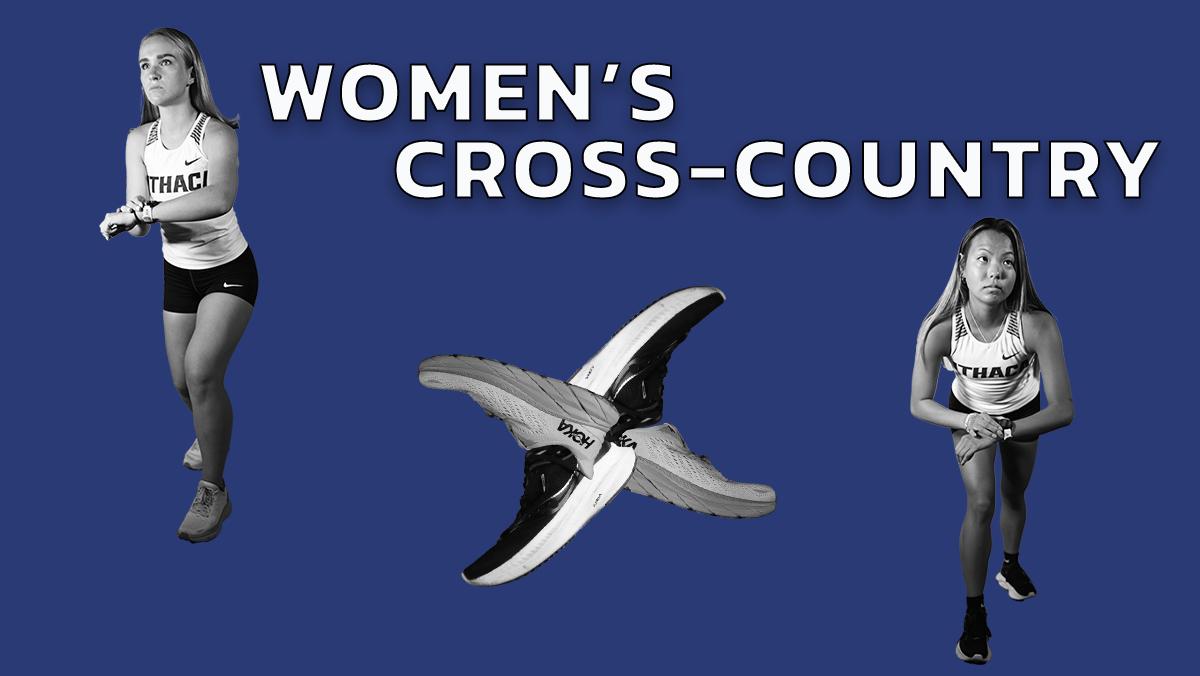 Leila Marcillo-Gomez/The Ithacan
From left, seniors Meredith Garrity and Julia Tomanovich of the Ithaca College women's cross-country team. The Bombers are looking to get back to Nationals after just missing them in 2021.
By Aidan Charde — Sports Editor
Published: August 31, 2022

Although the Bombers fell short of their end goal, they raced to a third place finish at the NCAA Regional Championship at the Geneseo Warplane Museum in Geneseo, N.Y. on Nov. 13. The result gave the team its third podium finish at the meet since head coach Erin Dinan took over in 2011, but Dinan said the team wants to get past regionals and back to Nationals in her 11th season at the helm.

“[The team was] definitely disappointed, I think, to be so close [to Nationals],” Dinan said. “But they’ve been talking about getting back to qualifying and competing at Nationals since then. All through indoor and outdoor track, they’re excited.”

Senior captain Meredith Garrity echoed her coach’s sentiments. After the team placed 26th out of 32 in the country in 2019, its lowest finish at Nationals since 2012, and missed 2020 because of COVID-19, she said the team had something to prove.

Dinan added that the 2021 season was different than usual in terms of the team makeup. After having Taryn Cordani ’17 and Parley Hannan ’20 for six seasons, who Dinan said were the top runners for their years with the team, the 2021 roster saw multiple athletes take the top spot.

“For the first time in a long time, I had about five women interchange who was our top runner,” Dinan said. “They had to work together to be leaders. … When you’re number one, that helps, that changes the whole score. But when you have five people running right around the same time, that means you have an incredible pack.”

In cross-country, points are scored by the five fastest finishers from a team, a runner’s score being the place they finished in. All five scores are added up and the team with the lowest total wins, so while finishing faster is important, being consistent across the field is also key.

That dynamic will also remain in place this season. Although Dinan said the team has several strong runners, no one athlete stands far enough above the rest to be the clear top athlete — which keeps the team a cohesive group.

“Paloma de Monte, Lauren Lobdel and Isabel Johnston were all seniors last year that are coming back,” Dinan said. “They’ll be leaders in their own right … [but] it’s not just, ‘this person’s leading the team,’ it’s ‘we’ve all got to pull our weight.’”

Along with the points, Garrity said having a tight pack is vital to team chemistry. She said being able to look around the track while running and see one teammate can be an incredible motivating factor, so having a group running together is even better.

“We really do look for each other out there when we’re in a race,” Garrity said. “We got really into pack running last year, … so I think carrying that into this season is super important. You want to make sure you work with your teammates and not try and work against them.”

Senior Julia Tomanovich, the other captain alongside Garrity, said that her role as a captain means that she has to make sure the pack stays together and that the team has good chemistry.

“I want to make sure that there’s a good cohesiveness within the team,” Tomanovich said. “Not that we haven’t had that before, but I think a big part of being a team sport is that everybody kind of gets along. We can’t finish a race without each other.”

She added that knowing she is a senior and this season possibly being her last makes her all the more motivated to do well. Although she is a clinical health studies major and has the option of staying with the team for a fifth year, she is not yet sure what she will do.

“I mean, I’m going to treat it like my last season,” Tomanovich said. “I’m going to put my all into it. I’m lucky enough to have an extra season if I want it, but I’m just going to lay it all out there as if it was my last with the other seniors who don’t have another season.”

And although she knows the team has to take the season one meet at a time, Garrity knows what the end goal is for her and her teammates.

“[Going to Nationals] is what we want, it’s what we have our eyes set on,” Garrity said. “We’ve had our eyes set on it [since] back when we found out we didn’t make it last year. We tried to stay focused on moving forward. What can we do next time? What can we improve on? We’re just all about the future.”

The Bombers will race in their first meet of the season at the Jannette Bonrouhi-Zakiam Memorial Alumni Run at 11 a.m. Sept. 3. The team kicks off its competitive season a week later, Sept. 10 at Hamilton College.