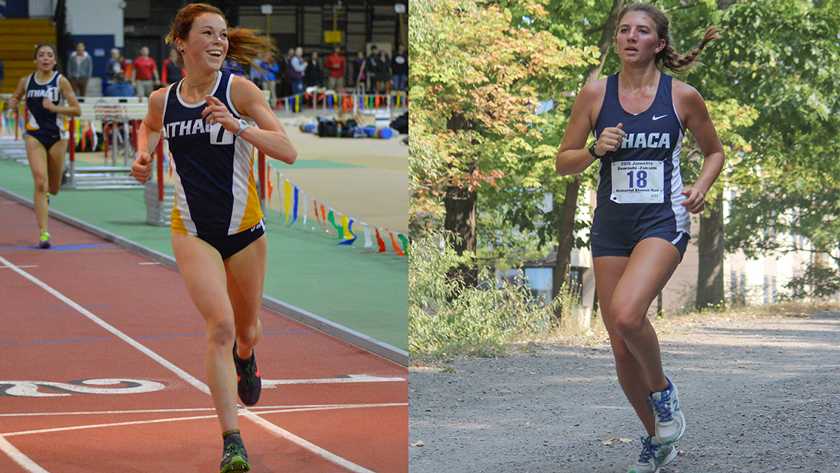 For two sports that mainly revolve around strength, speed and endurance, cross-country and track and field run on entirely different worlds, but many student-athletes still choose to compete in both.

Sophomores Taryn Cordani and Sierra Grazia are entering their third seasons with the women’s track and field team after just rounding out their first seasons with cross-country. While Grazia and Cordani typically take part in the track team’s preseason, this year they could not because they were still competing for the cross-country team. Grazia said missing the preseason did not prove to be a challenge at all and instead said it has helped her leading into track and field season.

“Cross-country has given me a lot more endurance than I ever had. I feel a lot stronger, and I think it gave me a lot of confidence. The team is so supportive,” Grazia said. “Being with the same girls over and over, such a small, tight-knit group really gives you a lot of support.”

“I think because of the consistency in coaching and training and that you’re always running, it is easier to do both [cross-country and track] in college,” Dinan said.

Cordani joined the cross-country team this season because she knew either way she would be running in the fall, so she figured she would run with teammates instead of alone.

“It was something I have never done before, so I wanted to open up to this new experience,” Cordani said.

The teammates opened their second indoor season Dec. 5 at the Greg Page Relays, held at Cornell University. Cordani placed first in the 5,000 meter, finishing with a time of 17:38.52, 1 1/2 minutes ahead of her next closest competitor. Grazia participated in the distance medley and 4 x 4 relay and placed fourth and 10th, respectively.

Cordani also felt cross-country has helped her overcome any premeet anxiety before a track race.

“Cross-country has made me much more relaxed and excited to race, and it’s something that has helped me mentally,” Cordani said. “I get excited for meets as opposed to dreading them.”

Grazia said she was told by a couple of members on cross-country to join the squad, and after last outdoor season, she said she felt cross-country would be a good jump start into the following indoor season. She also said it does not hurt to try something new.

Dinan said although these women only miss practice hours, they are all still included in the team bonding events.

“Anybody doing cross-country has a hard time transitioning to the preseason of track because everybody training within the track team has been together since October, so they miss out on knowing the track team,” Dinan said. Cordani and Grazia did not begin practicing with the track team until the end of November.

Dinan, head coach Jennifer Potter and assistant coach Mary Wallenbeck set up team bonding and team building to incorporate the cross-country team with the track team to make the transition smoother. One example of bonding Dinan mentioned was the women’s getting together to make cookies.

Although both sports center on running, they are not entirely the same. For track, Cordani is a fan of the different events, which range from sprinting to distance, especially since they occur at all different times during the meet.

Cordani said she is able to cheer for all her teammates during their individual events throughout the whole meet. As for cross-country, she is running alongside her whole team and can only see their performance once she completes the race.

“For cross-country, it is easier for the team to be closer because there is less people,” Cordani said.

With their first cross-country season in the books, both girls look forward to continuing next season.

“Cross-country definitely has a special place in my heart now,” Cordani said. “It’s definitely way more than I expected. It’s not just racing. It’s like a culture or like a family.”