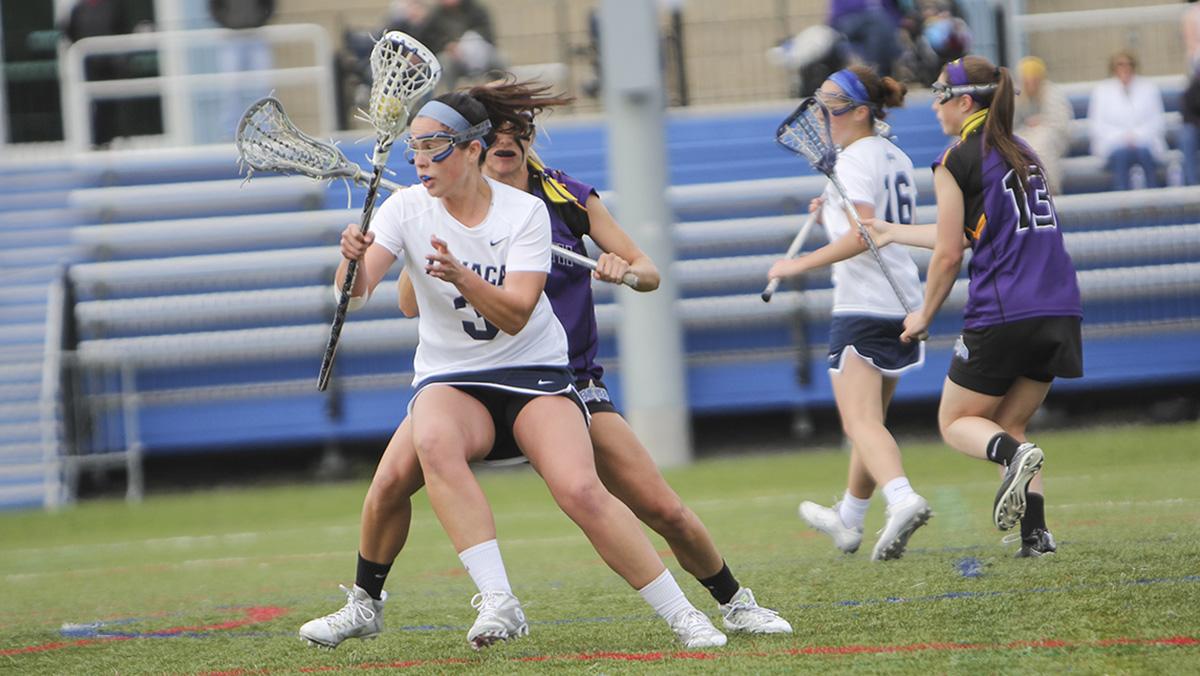 The Ithaca College women’s lacrosse team defeated Nazareth College 13–11 May 7 in Higgins Stadium to advance to the Empire 8 Championship on May 8, due in part to a second-half momentum switch that gave the Bombers command of the game.

The Bombers started the game off slow and never led in the first half, as Nazareth started the game with a 2–0 lead. Senior midfielder Riley Marion got the scoring started for the Bombers, followed a minute later by a goal from freshman midfielder Allison Panara to tie the score at two.

The Golden Flyers responded, adding another two goals of their own. The teams traded goals for a few minutes, with Bomber goals coming from junior attackmen Morgan Racicot and Gaby Bern and junior midfielder Morgan Cadwell.

Nazareth had the 7–5 advantage at halftime. Marion said the team got together and motivated each other to have a strong second half.

“I think we just realized we weren’t playing the way we wanted to play,” Marion said. “We realized if we really wanted this, we had to play our game, and so we just came out ready to go.”

The second half started with a bang for the Bombers, as they scored four unanswered goals to take their first lead of the game. Goals from Cadwell and Berne and a pair from Marion to complete the hat trick gave the Bombers a 11–7 lead.

Nazareth fired back, scoring a minute after Marion’s goals. Four minutes later, Marion scored her fourth goal of the game, followed shortly with a goal by freshman attackman Danika Wagener.

Marion would go on to score her fifth and final goal of the game with ten minutes left to play, giving the Bombers a 12–9 lead. Nazareth scored two unanswered goals as they tried to mount a comeback late in the game, but it was not enough to beat the Bombers, who went on to win 13–11.

Sophomore defender Molly Long said the adjustments made at halftime made the difference in this game.

“I think the second half, we really needed to come together more and play more like a team,” Long said. “I think we succeeded. We had each others back. The slides were there and we had to change up what we were doing and come out with a bang, and we did.”

Sophomore goalkeeper Kimberly Presuto played 41 minutes and 34 seconds, giving up only six goals and picking up six saves. Marion led the team with five goals, followed by Berne, Racicot and Cadwell with two a piece.

The Bombers will play in the Empire 8 Championship at noon May 8 in Higgins Stadium against the winner of the second semifinal game of St. John Fisher versus the Stevens Institute of Technology.

Head coach Karrie Moore said the team was able to overcome things the other team would not have been able to in order to get the win today.

“I think, sometimes, when you don’t feel like you start the way you want to start, some teams never get their momentum back,” Moore said. “I felt like really playing like a team at the end of that game was what won it for us.”