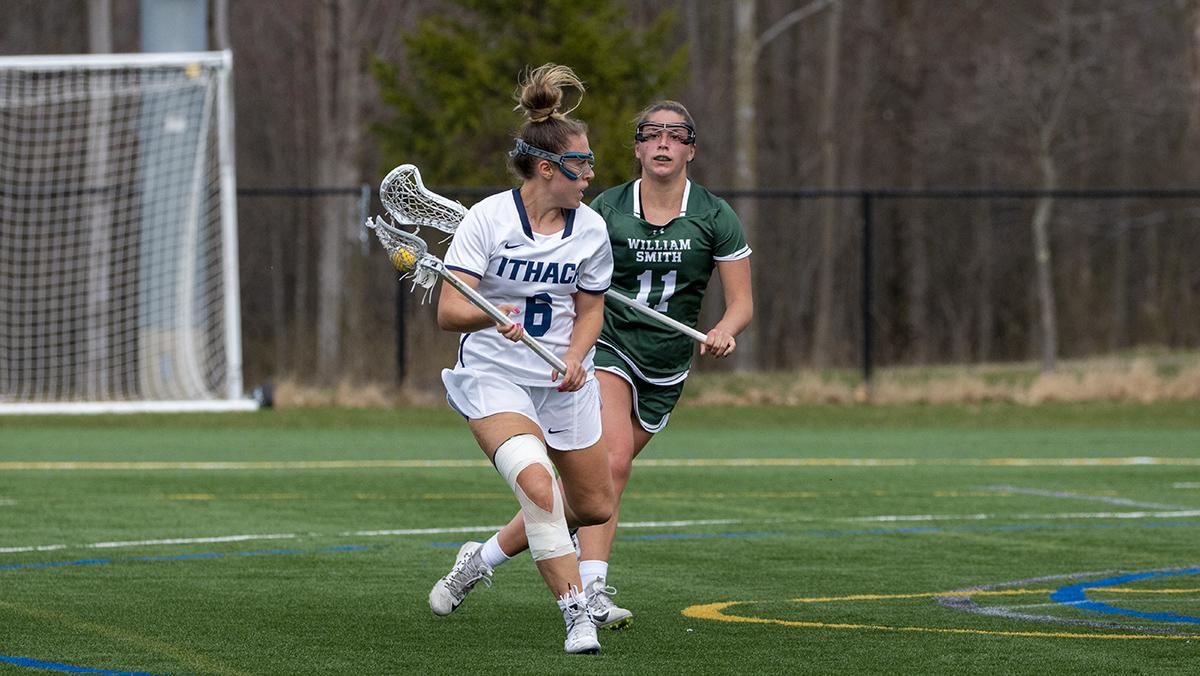 The No. 9 Ranked Ithaca College women’s lacrosse team fell to the No. 8 ranked William Smith Herons by a final score of 14–13 at Higgins Field on April 14, dropping to 10–2 on the season and 6–2 in the Liberty League.

The Herons got the scoring started on a free-position goal following a foul by Bombers senior defender Kelly Mehorter at the 13:32 mark of the first quarter. Junior Maddie Montgomery converted the goal for the Herons, marking her 40th on the season. The Herons went up another goal by senior Payton McMahon scoring, pushing the lead to 2-0.

Graduate student defender Rachel Rosenberg scored first for Bombers to bring the game back to within one. However, the Herons would again increase their lead following goals from junior Kaitlin Pellechia and sophomore Allie McGinty.

The first quarter remained a close affair as the college was down two heading into the second quarter. Both teams had nine shots on goal, however, the Herons had more on target, 8–5. The Bombers also had four turnovers compared to the Herons’ two.

The second quarter belonged to the Herons, playing strong defense and holding the Bombers to two shots on the goal, both coming on free-position attempts. The Bombers capitalized on both, as graduate student attacker Alexa Ritchie and sophomore midfielder Sydney Phillips earned their 32nd and 16th goals on the season, respectively.

The college overall struggled with turnovers, committing six in the quarter with some coming in scoring position. It had a chance to score with a woman-up in the final minute and a half in the frame, but it would turn it over and not capitalize on the opportunity.

The Bombers would open the scoring in the third quarter following a goal from senior midfielder Megan Motkowski, however, the team went scoreless for the next eight minutes, not scoring until 5:36 remaining in the quarter. It attempted six shots, one bouncing off the post and the two being saved by the Herons freshman goalie Maura Smeader.

McGinty continued her impressive day, adding two more goals in the quarter at the 11:07 and 5:39 mark, bringing her up to five through three quarters.

In the fourth quarter the Bombers would chip away at the Herons lead. Following a goal by Herons’ Pellechia, the Bombers would go on a 3–1 run to cut the lead to 14–11 Herons with 7:32 remaining in the contest, before a Herons timeout. Sophomore midfielder Caroline Wise, graduate student attacker Madison Boutureira, and Ritchie all scored as part of the run.

The Herons timeout could not slow down the Bombers as freshman midfielder Maddie Hall would score to make it a 14–12 Herons lead. Ritchie would cut the Herons lead to just one with 1:09 remaining in the final frame and earn her fifth hat trick on the season, but the goal would be too little too late as the Herons would win the last draw control and drained out the clock to win.

The Bombers will now travel to the Rochester Institute of Technology for a matchup against the Tigers on April 16 at 3:30 p.m.