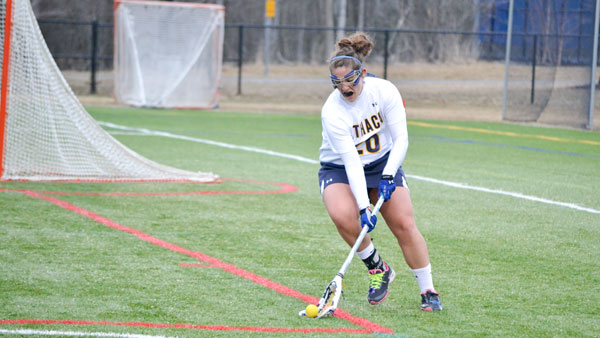 Women’s lacrosse head coach Shannon McHale took a knee as she talked to her team during a timeout midway through the first quarter of the game against William Smith College on April 8 at Higgins Stadium. As the team huddled around her, she told the players to slow down and let things happen instead of forcing plays. For the remainder of the game, the Blue and Gold outscored their opponent 7–4, en route to a 9–6 victory.

The Bombers have won seven straight games because of their growing confidence and defensive improvement. The Blue and Gold are currently tied for first place in the Empire 8 standings with the Stevens Institute of Technology Ducks. The South Hill squad hopes to use the momentum it has established to separate itself in the E8 Conference.

McHale said earlier in the season her players tended to be over aggressive at times, forgetting to be patient and let shots develop in front of them. As the last quarter of the season is about to begin, McHale said, the team is hitting a groove and is looking to improve with each contest.

“We’re getting more confident, truthfully, with each game,” she said. “We’re learning a little bit about ourselves every game. So the key is taking each of those pieces we’ve learned and putting them towards the next one.”

The Ducks have matched the Bombers step-for-step in the E8 standings. They are undefeated in conference games and have won four of their last five games. The Bombers, however, ended the Ducks’ season last year in the Conference Championship tournament 17–11 on May 4, 2013, at Higgins Stadium. This year’s conference title could be decided based on the result of the April 18 game between the Ducks and the Bombers at Stevens.

The South Hill squad’s defense has improved throughout the course of the season, leading up to the next game. Through the last four contests, the Blue and Gold are conceding an average of four goals per game, compared to an almost 11-goal average during the team’s first five contests.

Freshman goalie Emily Ross said her teammates on defense have allowed her to elevate her play during their win-streak.

“All in all, we’re a solid defense,” she said. “It’s not just me out there, I have everyone. I wouldn’t be where I am without them.”

The Bombers are now 4–0 in conference play, and they average about 10 goals more than their opponents in those victories. Their last game April 13 resulted in a lopsided score of 19–1 against Alfred University. The one goal by the opposing squad was the fewest goals the Blue and Gold have allowed in a game since April 22, 2012, when they travelled to Alfred, N.Y., and defeated the Saxons 20–0.

In that game, the Bomber defense allowed a season-low six shots on goal. Limiting potential goal chances coupled with Ross’ growing confidence has allowed the Blue and Gold to extend their win-streak. McHale said the energy of the defense extends to Ross, allowing her to match its intensity.

“Emily can come up with really big saves — and does — but a lot of times when the defense starts to get a little less aggressive, I think she steps back a little bit too,” she said. “When our whole defense stays aggressive, we’re really good. The defense and goalie complement each other.”

Stevens head coach Celine Cunningham said despite the team’s history with the Blue and Gold, the squad the Ducks will face April 18 is much different than last year’s team. Cunningham said her squad will have to prepare to attack a new goalkeeper who the Ducks have never competed against before.

“[The Bombers] graduated so many [seniors] last year, so this is going to be a new look for us as far as personnel that we see,” she said. “I certainly see some tendencies that we’ve seen in the past. They have a new goalie, so that’s going to be something that we’re going to have to figure out — hopefully we’ll figure that out this week [in practice] as opposed to in the game.”

Ross said the team must avoid becoming complacent with its recent streak of success during the most critical part of the season.

“Every day, just getting a little bit better,” she said. “We never look at it as ‘seven [wins] in a row, all right we’re good.’ It’s about what we can do to get better.”