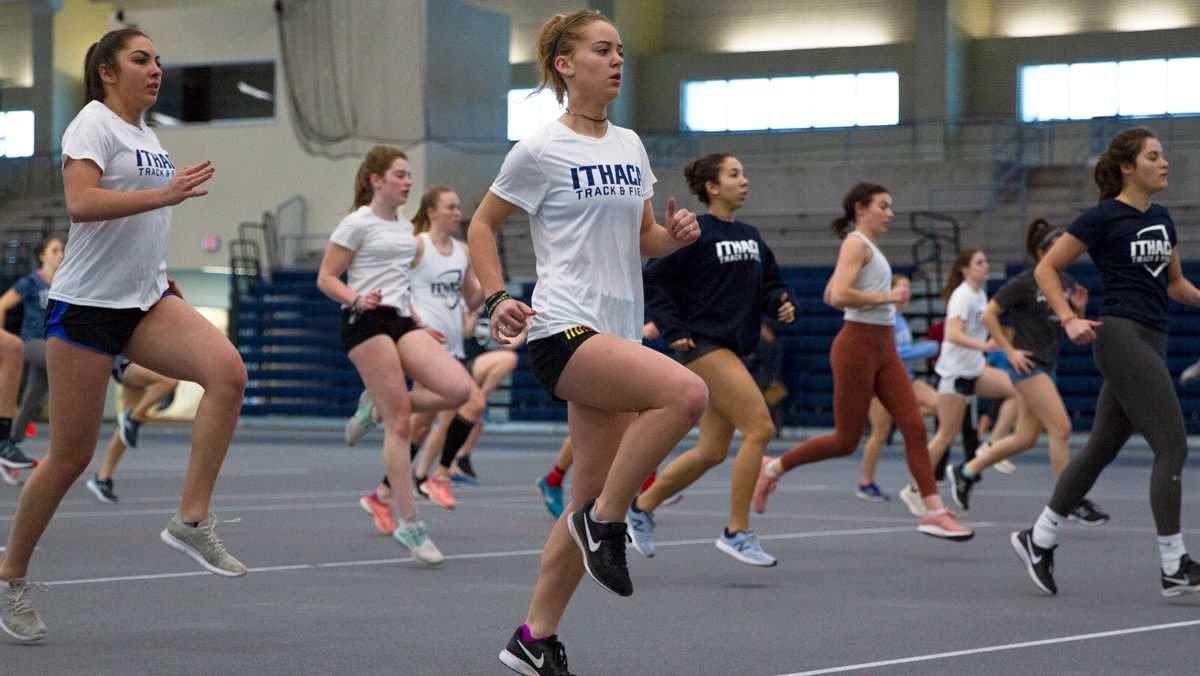 When the Ithaca College women’s track and field team opened their season Dec. 1 at the Greg Page Relays, several new freshman were competing in their first collegiate match. However, most of these athletes were not fazed by the size of this stage, as they had performed and succeeded at the highest levels of high school track and field.

Last season, the Bombers won the Indoor Liberty League Championships and placed seventh overall at the NCAA Division III Indoor Track Championships. The team was carried by seniors, notably Taryn Cordani ’18 and Katherine Pitman ’18, who were both national champions. While losing such a strong senior class can lead to a program need a rebuilding stage, the Bombers had an incoming class of 24 freshmen athletes this year, many of whom competed at the state and national level of track in high school.

Freshman Logan Bruce has come out strong for the Blue and Gold thus far. In high school, Bruce won the 2018 Section 4 Class D championships and finished in sixth place in the 100-meter hurdles. For the Bombers, Bruce has two second-place finishes and four third-place finishes across her first three collegiate meets. Freshman Meghan Matheny has also had a successful start to her collegiate career, with a first and second place finish across three meets. Matheny placed first at the Indoor New York State Public High School Athletic Association Section 4 Championships during her senior year.

Bruce and Matheny are not the only highly successful freshmen on the roster, and Jennifer Potter, women’s track and field head coach, said she looks forward to the incoming class contributing to the team’s success.

“They are great students, talented, motivated and fun,” Potter said. “We look for competitive athletes who are driven both academically and athletically.”

It is not just this year that the Bombers have had a strong freshman class. At the 2018 Liberty League Conference Championships, then-freshman Ariyahna Bernard was named Liberty League Indoor Rookie of the Meet after placing third in the weight throw with a mark of 14.5 meters and sixth in the high jump at 1.49 meters. Fellow teammate then-freshman Jaime Sheppard placed second in the 400-meter dash at the same meet, and the two young stars helped the Bombers win the Liberty League Indoor Championship.

At Ramapo High School, in Wyckoff, New Jersey, freshman Stephanie Behrens competed many times at sectionals, groups and New Balance Nationals Indoors. She placed seventh at Outdoor New Jersey State Interscholastic Athletic Association Sectionals North 1 Group 2&3 in 400 hurdles at 1:06.81. Behrens said the physical therapy program at the college was a draw for her.

“I know I’ve wanted to do physical therapy since I was in seventh grade,” Behrens said. “By the end of my junior year, I realized I wanted to run in college. So I contacted Coach Potter and a bunch of other coaches and I met up with Coach Potter over the summer and I really loved her.”

Potter said the coaching staff is able to bring in highly touted recruits due to its philosophy of putting their athletes’ interests first.

Behrens said that during the process of recruiting, Potter made it easy for her to think open mindedly about where she should attend college. Behrens was also considering running track and field at the the University of Vermont, a Division I school. Behrens said that she felt comfortable being open about her options and that Potter was interested in her success as a person as well as an athlete.

“What was different about Coach Potter was that she made me feel really wanted,” Behrens said. “She kept reaching out to me and asking what I was thinking. Even during our meeting, I was thinking about UVM. And she said ‘Even if you end up loving UVM, I wish you all the success, and I get it.’ She just wanted the best for me, and I definitely felt wanted when she kept reaching out to me.”

Junior Amanda Wetmore was interested in the academics of the college during her recruiting process.

“I was drawn to the college because of their exploratory program, more specifically the exploring the options course that they offer,” Wetmore said. “As for the track and field program, I knew they have reputation of success and I wanted to be able to contribute to the legacy.”

As a freshman in the 2016–17 season, Wetmore placed fourth in the 60-meter dash, at the Empire 8 Indoor Championships. She also placed fifth in the 200-meter dash, helping the Bombers win their league championship.

“Our team has a reputation of success both on and off the track,” Wetmore said. “We also pride ourselves in sportsmanship. We have a strong freshman class, and I can’t wait to see all they accomplish this year to build on the legacy of our program.”