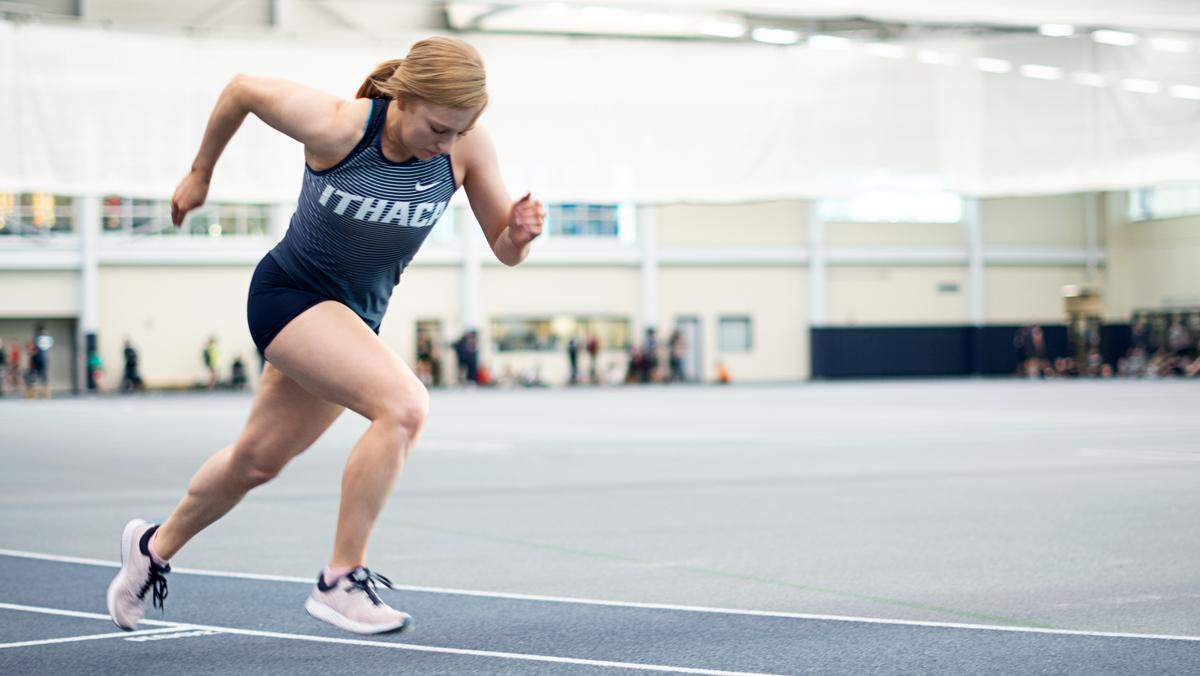 After successfully defending their Liberty League Championship title for women’s indoor track and field Feb. 24, the Ithaca College women’s track and field team is gearing up for its outdoor portion of the season.

After hosting eight meets for the indoor winter season at the Athletics and Events Center, the Bombers will be participating in all away–meets for the spring portion of the season. They will be traveling to New Jersey, Pennsylvania, Maryland and other facilities within New York state. The NCAA Championships will be held in Geneva, Ohio.

The Bombers will have the same core that they had for the winter season, and numerous freshmen, including pentathlete/heptathlete Logan Bruce and pole vaulter Meghan Matheny, will be trying to replicate their indoor successes for the outdoor season.

Head coach Jennifer Potter said she has been extremely happy with how the freshmen performed, and she said they have not had a difficult learning curve since they started and expects more of the same performances.

“I’m really excited,” Potter said. “I think we’ve got a great, young group. The freshmen have really brought a lot to the table, and they’re meshing really well with the returners.”

Junior thrower Kendall Wellauer made an impressive showing in the field for the Bombers throughout the whole Spring 2018 season. Wellauer placed sixth in the hammer throw at the Liberty League Track and Field Championships in May 2018, and she also held top–10 finishes in shot put and discus throw as well.

Wellauer said she is hopeful that the women’s team will move successfully through this upcoming spring season and finish with another impressive performance in the May championships.

“We have a really good group of freshmen coming in, and with the strong suit we had last year, I think we can do it again, if not better,” Wellauer said. “We’ve been working really hard — our workouts have been hard, our lifts have been heavy.”

Not only is the team planning on holding onto their Liberty League title, but the Bombers are looking forward to a strong representation at the NCAA Championship meet as well.

“The biggest goal that the team regularly shares is to try to get as many people to go to nationals as possible,” Wellauer said. “It is a huge accomplishment to qualify for nationals.”

The team also has its own goal program, during which the athletes create long-term goals, as well as smaller goals, for themselves that they aim to achieve throughout the two seasons. Wellauer said this was developed by their sports psychologists and implemented into weekly meetings between the event groups and the whole team.

“It’s kind of neat because you each do it individually and then you share it as a group,” Wellauer said.

The pole vaulting section of the team has been a stalwart during recent years, but losing Katherine Pitman ’18, who was named to the United States Track and Field and Cross Country Coaches Association all-region team for the outdoor season last year, has been difficult. Potter said that while Pitman was vital to the team, assistant coach Matt Scheffler has done a great job developing this year’s pole vaulters.

“We have a very good vault coach,” Potter said. “He’s great at developing vaulters. He developed Kat Pitman into a national champion. We attract good vaulters because we have a good vault coach.”

Potter said that junior runner Sarah Rudge has also had a strong year, and that she hopes she can take her momentum into the spring season. Rudge won the 1-mile run at the Indoor Liberty League Championships on Feb. 22 and also won the 800-meter run at the Marc Denault Invitational on Feb. 16.

“The one person that’s really had a breakout year is Sarah Rudge,” Potter said. “She’s in a totally different spot than she was a year ago, both physically and mentally.”

Sophomore pole vaulter Julia Nomberg said the winter season success should translate into the team peaking in its spring season.

“The entire team is looking really strong going into spring season,” Nomberg said. “As winter season came to a close, everyone started to put things together, and we all have been pushing ourselves so hard, and I think that is really going to show in the spring. We are stronger and more united than ever and that energy makes us unstoppable. I am so excited to watch everyone continue to surpass personal records and just overall do amazing things.”

Potter said that this year’s team has been a pleasure to coach and that she is looking forward to seeing what it can do in the spring portion of its season.

“The group is fun,” Potter said. “They’re hardworking and super fun to coach. It’s a great group and I’m excited to have the opportunity to work with them every day and to see them grow as people and as athletes and see where it takes us.”

Women’s track and field aims for a national championship