Women’s track and field team launching toward another conference title 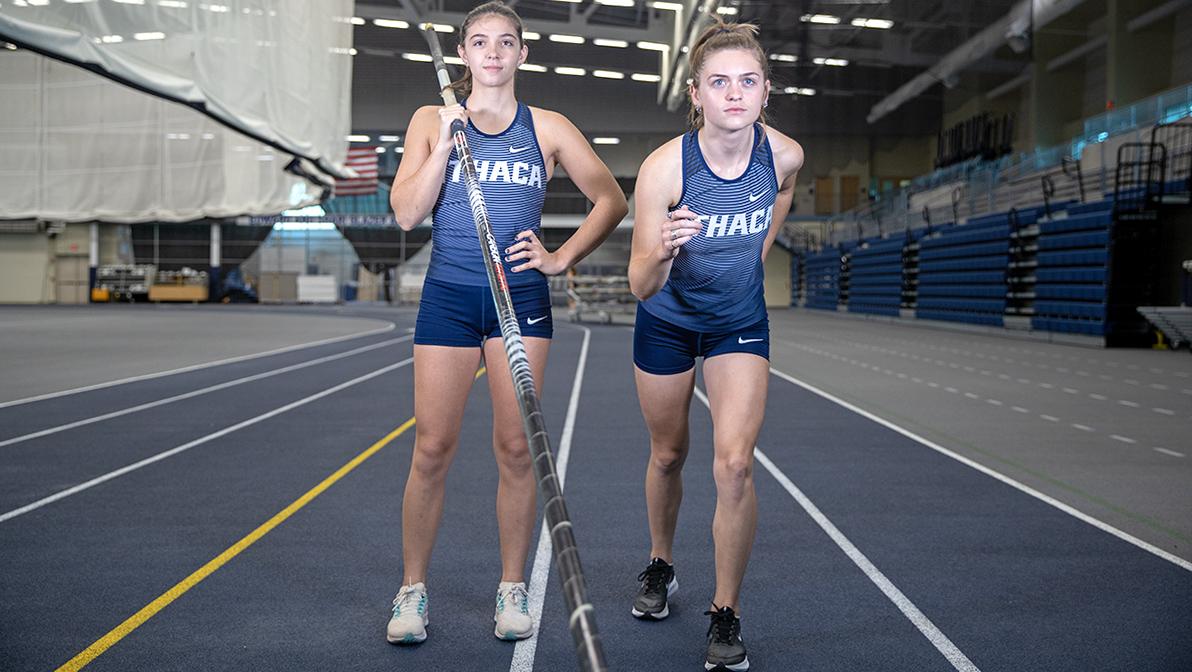 Following a triumphant Spring 2022 outdoor season where the Ithaca College women’s track and field team finished 28th in the country, the Bombers are ready to resume competition for their indoor season.

The Bombers capped off a 2021–22 indoor season where they captured third place at the NCAA Championships on March 11 and 12. Meghan Matheny, who was a senior at the time, placed first in pole vault, while then-senior heptathlete Logan Bruce and then-sophomore pole vaulter Sara Altonen turned in All-American performances to guide the college to a third-place finish. Then-junior sprinter Tia Jones also notched two second-place finishes in the 60- and 200-meter dashes.

Additionally, Matheny, Altonen and then-junior pole vaulter Martha Kemp-Neilson were named All-Americans in May after their performances at the NCAA Outdoor Championships in Geneva, Ohio, on May 26–28.

Despite several key members of the team graduating this past May, head coach Jennifer Potter ’92 said she feels enthusiastic about the future of the program.

“They keep using the word ‘energy’ in the weight room and at practice,” Potter said. “Thinking about the teams before us and what we can do with this tradition of success, our women buy into that.”

The Bombers enter indoor competition having won the last 14 consecutive conference championships between the indoor and outdoor seasons and also sent five women to the NCAA Outdoor Championships. The team will be looking to continue their recent run of success and continuity as competition moves back indoors.

Potter said one element of this upcoming season that will greatly benefit the team will be less COVID-19-related restrictions. The Bombers lost three seasons to the pandemic during the 2020–21 calendar year.

“Living in constant fear of ‘Will COVID[-19 end] another season?’ That stuff takes a lot out of you,” Potter said. “Now we can just breathe and get back to normal.”

Potter also expressed the importance of managing expectations from year to year as well as maintaining a strong culture of camaraderie and kinsmanship. Even though track is not conventionally known as a team sport — athletes compete individually for a team score — Potter said she feels that one of the team’s biggest strengths is its sense of togetherness.

“A lot of people just assume track is not a team sport, and I feel like our program is so opposite of that,” Potter said. “We are a strong program from top to bottom, and we want to maintain that thought process.”

Altonen, a junior pole vaulter, said the team has been growing closer through its shared experiences away from the track, like cooking competitions with the coaching staff. She said these types of experiences are what help team morale and camaraderie stay at a high level throughout the course of a season.

“It’s just a really good chance to get to know the team outside of practice,” Altonen said. “The biggest thing for me is getting comfortable with pushing myself, and having captains’ practices and chances to bond with the team has been awesome.”

Coming into her first season as an upperclassman, Altonen also said that she feels a sense of mentorship and responsibility toward the younger athletes. The team enters its indoor season with 29 underclassmen.

“This year, a lot of the upperclassmen have been loud in the lifting room, encouraging everyone to put more weight on,” Altonen said. “We want to encourage everyone to be communicative in order to be the best team we can be.”

Going into the season, Altonen said her individual goals are to capture a national title as well as secure another All-American honor.

Senior long jumper Sara Brown said one definition of success for her, as a captain, would be watching the other women on the team set personal records as well as staying healthy.

“Being able to see my teammates achieve their goals [is what a successful season would be to me],” Brown said. “We always talk about our goals at the beginning of the season, and just seeing the other girls achieve what they set out to do … both from a mental and physical perspective [is important].”

Potter added that managing the transition from outdoor to indoor competition is another critically important ingredient in team success. She said that the coaching staff designs the training regimen to ensure that each member of the program is ready for their event year-round, even if that includes training for outdoor competition while indoor is still going on.

“We had to start some of our outdoor events during indoor or else we wouldn’t have enough time to prepare,” Potter said. “It’s a lot of careful design of training and programming, and the coaching staff always needs to be on our A-Game.”

The Bombers begin their season Dec. 3 at Cornell University in the Greg Page Relays.