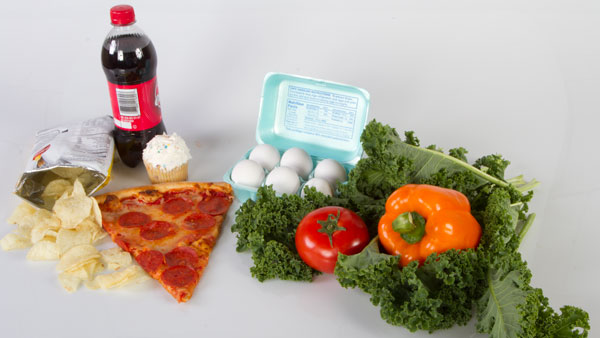 Senior Alyssa Frey used to look in the mirror and not like what she saw. She hated going into stores and looking at herself in clothes that didn’t fit or feeling like she couldn’t contribute to her cheerleading team because of her size.

Frey had been overweight since sixth grade and tried everything from eating only 1,200 calories a day to cutting out cheese from her diet. After coming to Ithaca College, she soon had a boyfriend and friends who loved her and a cheerleading team that supported her. Even though she was unhappy with her appearance, she didn’t feel like she needed to change for anyone but herself.

Frey had heard about the “freshman 15,” of course. A combination of dining hall food and the constant temptation to order cookies at midnight proved to her the rumor was true. But the “freshman 15” soon became 25, 30 and, before she knew it, more than 40 pounds, which Frey had gained in her first year at the college.

She was, in her own words, “complacent.” She blamed the washers in Talcott Hall for shrinking her jeans. But when she went home for summer break between freshman and sophomore year, her doctor told her, at 5-feet 2-inches tall, she weighed 211 pounds.

Cathy Saloff-Coste, Ithaca College’s dietician and nutrition consultant, said there is a range of healthy weights for people of different heights in reference to their body mass index.

“If they’re overweight relative to their own growth charts really, from childhood, the best thing that they can do is establish as quickly as possible a healthy eating pattern and exercise,” she said.

As a cheerleader at the college who “lifts weights and people,” Frey has lost 65 pounds since she began getting serious about her fitness in the middle of her junior year. Succeeding in school, work and sports, Frey felt that her health was the only part of her life in which she wasn’t excelling. What made Frey’s weight loss stick was simple: she was doing it for herself.

“It’s always been about me, and it’s always going to be about me because it’s my body and nobody else’s,” Frey said. “It’s not hard for me to stay motivated … because I’ve always been the one to set the goals.”

Like Frey, senior Katie Levittan gained 30 pounds her freshman year because of dining hall food and ordering unhealthy meals every week online. By the end of her freshman year, she weighed more than 220 pounds at 5-feet 5-inches tall. She hated her chubby face and stomach, and while she noticed her clothes began getting tighter, it was a health scare during her sophomore year that made Levittan get serious about her fitness.

Levittan discovered a lump on her right breast right before her midterms, which prompted her to undergo a mammogram and biopsy. While the tumor was benign, it scared her enough to make a change, because obesity can lead to a higher risk of cancers, including breast cancer, according to the National Cancer Institute.

She began running on the treadmill and doing ab workouts while cutting out foods that are high in carbohydrates such as cheese, pasta and bread. Both her desire to be healthy and her fear keep her motivated, Levittan said.

“I’m terrified of gaining the weight back that I lost,” she said.

Upon hitting her goal weight of 140 pounds in mid-February, Levittan has now lost more than 80 pounds after two years of improving her lifestyle.

One thing the two women agree on is that their journeys were not diets; they were lifestyle changes. Frey said she had an obsession with numbers and calories, reading the nutrition labels on everything she ate for five months, but then realized that counting calories was not helping her.

“I started by counting the numbers and being obsessed with the numbers, and then learning that it wasn’t about the numbers,” Frey said.

Levittan agreed that having a restrictive calorie count doesn’t work in the long run, because no person wants to do that for the rest of his or her life.

“Strict calorie counting is just mentally exhausting,” Levittan said. “It becomes an obsession that truly is just not healthy.”

Both Frey and Levittan said the most important aspect of their fitness was making sure they were feeding their bodies right. Without the proper combination of carbohydrates, protein and fat in their diets, they would not have been able to work out enough to actually lose the weight. Both women cited moving off campus as a major step forward in their lifestyle change. They were able to make healthier choices and cut preservatives and chemicals out of their diets by cooking their own food.

“If you can’t pronounce the words of the things that you’re eating, then you probably shouldn’t be putting it in your body,” Frey said. “If I want to make cupcakes, I have to make them from scratch because I know if I make a box mix it’s going to have all these weird preservatives.”

Levittan no longer cuts any food out of her diet, believes in cheat days and never denies herself something she wants in moderation. She eats at least two eggs a day and has sauteed vegetables with almost every meal. Levittan is a fan of cardio and said it is now a stress reliever for her. She works out three times a week, varying between workouts like Jillian Michaels DVDs, which involve a mix of cardio and weight training, and Zumba. Having been in this healthy lifestyle for two years, Levittan said she no longer even craves sweets and junk food, preferring healthier alternatives instead.

Frey said it is not about depriving herself of the food she wants to eat, but eating everything in moderation. It’s not realistic as a college student to say she will not eat pizza or a brownie, she said. She realized eventually what fueled her body and what did not.

“You shouldn’t have to give up things that you like to achieve the goals that you want, because that doesn’t make sense,” Frey said. “I hate eating salad because it’s boring and awful … But I eat it because I know that it’s good for me, and that when I eat salad I can also eat cupcakes.”

Saloff-Coste said making smart decisions in the dining hall can be difficult because of all the choices, but knowing what a person should have on his or her plate can help manage weight.

“You’re looking for a protein source, and complex carbohydrates with some fruits and veggies, possibly with some low-fat milk for calcium,” she said.

Saloff-Coste also suggests eating slowly to give the body the 20 minutes it needs to determine if it’s still hungry.

When Frey’s friends ask her how she lost all the weight and beg her to reveal her “secret,” she tells them the truth: there is no secret. She believes in the “You get back what you put in” mantra and that people need to eat food that’s real, get off their butts and go to the gym. Even if it’s only two days a week to start. Setting small goals is the key to staying on track for the long run.

Levittan said when she was at her heaviest her freshman year, the idea of losing 80 pounds was terrifying. But less than two years later, she had done it.

“At first it was like, ‘I want to hit this goal weight,’ but at this point, I don’t even care about it anymore,” Levittan said.

She said the number on the scale doesn’t matter anymore; what truly matters is that she is finally comfortable in her body.

Levittan and Frey both said that other than feeling healthier and more self confident, one of the biggest rewards of the weight loss has been seeing people they haven’t seen in years and the reactions they receive.

“On like the shallowest level it’s very nice to be able to see someone who I haven’t seen in a year and have them [say] … ‘Are you even the same person?’” Levittan said. “It’s really nice to not be ‘the fat girl’ anymore.”