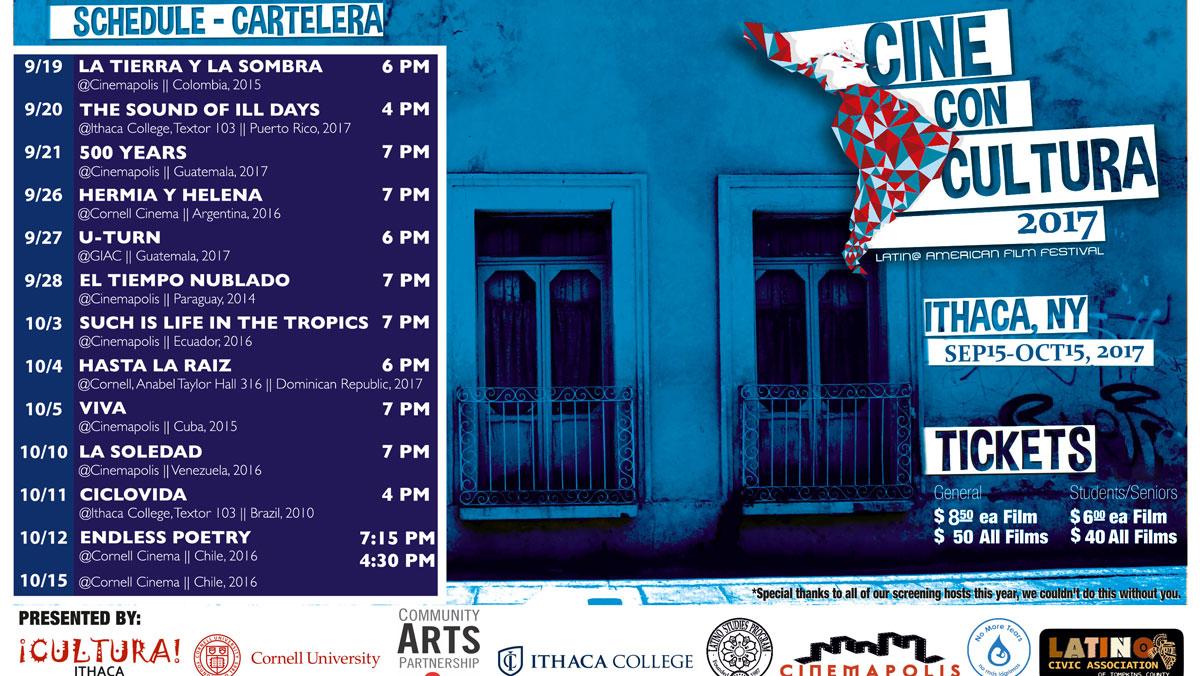 Courtesy of ¡Cultura! Ithaca
The festival features 12 Latin American films. All the films are in Spanish or Portuguese, and will be showing at local venues. General admission is $8.50 and student/senior tickets are $6.00. The festival started on Sept. 19 and will end on Oct. 15.
By Silas White — Assistant Life and Culture Editor
Published: October 4, 2017

In one film that will be featured at Ithaca’s annual Cine Con Cultura film festival, a young Cuban drag performer must reunite with his estranged father and come to terms with his sexuality. In another, an Argentinian theater director travels to New York and begins receiving mysterious postcards. Another places an elderly mother in the care of her young boy. Cine Con Cultura, an annual film festival that’s part of Latinx Heritage Month, will be bringing these films and others to local audiences.

Cine Con Cultura runs from Sept. 19 to Oct. 15 at local venues such as Cinemapolis, Cornell Cinema and Textor Hall. ¡Cultura! Ithaca, a local group that aims to share Latin American culture with the Ithaca community, is sponsoring the festival. This is the event’s fourth year but is the first to involve formal collaboration with Cornell University and Ithaca College students.

Enrique González-Conty, assistant professor in the Department of Modern Languages and Literatures at the college and the main organizer behind the festival, brought students from his class on board to help spread awareness of it.

“I asked my students if they wanted to collaborate,” he said. “I teach Park students who are either studying Spanish or Spanish minors. … Originally, I planned to ask my students to be the social media managers, but then we also wanted to shoot really short videos on the Latino American associations in town to screen before the films.”

Junior Joe Anthony Cruz worked on the festival’s social media and marketing this year, and he also worked on web design for ¡Cultura!’s website. Cruz also edited and recorded voiceover for the short videos made for the Latinx associations, such as “No Mas Lagrimas,” a local group responsible for organizing Latin American festivals.

“The videos will be shared with each organization to use on their website and social media,” she said. “We’re also showing them as videos before each film during the festival, and they’ll also be kept to share with community members.”

Students also had the chance to work on their own projects for a short film competition called “Cine al Instante,” or “Call for Films.” Debra Castillo, chair of Hispanic Studies and professor of Comparative Literature at Cornell, said the competition started last year to increase interest in local filmmakers, and the collaboration with students led to the submission of student films.

Cruz worked on a short film called “Politica de Queerness,” which examines the intersectionality of the LGBTQ and Latinx communities, to submit to the contest.

Cruz shot the video in one day, reaching out to Latinx students on campus who identify as LGBTQ and asking how they identify and how they express themselves.

“We talked about coming out stories, how your family views it, how it’s influenced by religion, how you present yourself … basically, your narrative and how it’s changed over time,” he said. “We also talked about discrepancies on campus, being a predominantly white institution, how you fit in being … Latinx and also queer.”

“They said if the film was quality, they would promote it on their site and send it to Huffington Post and Buzzfeed,” Cruz said.

González-Conty, who helped choose the films this year, said ¡Cultura!’s numerous sponsors from the college and beyond helped them acquire the film rights.

He said the screening of “500 Years” on Sept. 21 at Cinemapolis was very popular.

“The film on human rights two weeks ago was incredibly successful — the theater was packed,” González-Conty said. “Last year, we tried to start with a comedy, but we couldn’t acquire the rights so we had to switch. If films are going to be shown at other big festivals, like Sundance, they won’t let us show them.”

“It’s not just saying what are the best films, but what are the films that fit into this … panorama of some of the important work that’s happening,” she said.

Osorio Gil said the film festival quality has improved over the past couple of years due to increased sponsorship.

“Combining the strength of the downtown organizations — Cinemapolis, Cornell Cinema, Ithaca College … and all the different departments that got together to sponsor the films — has really helped to create a high-quality film festival,” she said. “When we started out, we were showing films we had access to, but now we’re showing films coming off of film festival circuits.”

Hillel at Ithaca College, the Jewish Studies Program, the Roy H. Park School of Communications and the Center for Academic Excellence will put on the Israel Film Festival March 1–2. The festival will feature three Israeli films: “The Flood,” “The Ballad for Weeping Spring” and “Garden of Eden.”