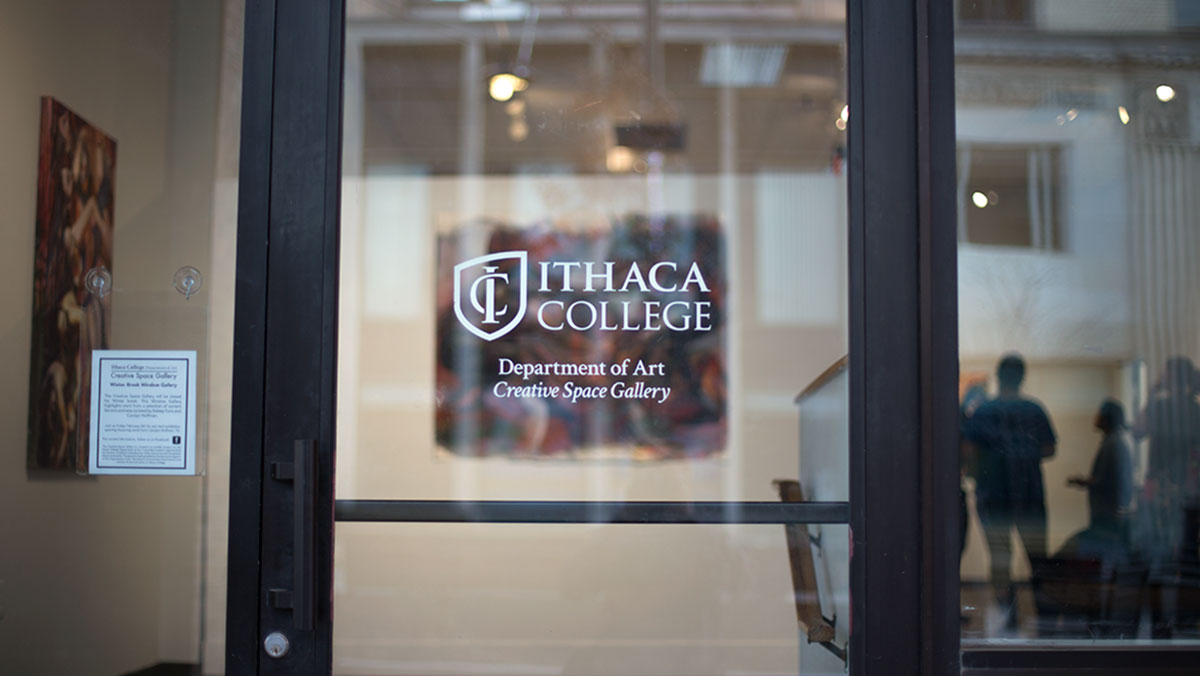 Tucker Mitchell/The Ithacan
The Creative Space Gallery, located at 215 E. State St. on the commons, will close in May after its final exhibit, "BANG!"
By Angela Weldon — Assistant Life & Culture Editor
Published: May 1, 2016

The walls of the Creative Space Gallery are currently filled with paintings, drawings, photographs and artwork of all kinds. Soon, however, the space will be cleared out and the walls bare.

The space at 215 E. State St., which was previously occupied by the Diaspora Gallery until the summer of 2014, has been the home to the Ithaca College Department of Art’s Creative Space Gallery since the department purchased and began renovating the space in April 2015. Approximately one year after the gallery opened its doors May 1, 2015, it will be closing after its final exhibit, “BANG!,” which ends May 15.

Bill Hastings ’92, assistant professor in the Department of Art, said the gallery is currently funded by alumni, the art department and the college. The college is losing the gallery space downtown because the department could only secure a short-term lease on the space at the time of the original agreement.

“We were unable to sign a long-term, 10-year conventional lease because our funding wasn’t secure,” Hastings said. “Another tenant was able to push us out with promises of a long-term commitment, and we were terminated.”

Susan Weisend, professor and chair of the Department of Art, said that after the college’s lease terminates, Cayuga Lake Massage School will likely occupy the space on The Commons.

Hastings said despite the closure of the gallery, it has been successful since its opening, with approximately 6,000 visitors and opportunities for the School of Humanities and Sciences Summer Scholars and paid gallery assistants and interns.

“The programming and opportunities have far exceeded our expectations, and we feel that we were just starting to realize the potential,” Hastings said. “This is the perfect vision of experiential learning Ithaca College strives to create.”

The gallery has hosted a number of exhibits since its opening, including its first exhibit in May  2015, “In Theories”; “Mutations” in July 2015; “The Space Between” in November 2015;  “Mind vs. Body” in February; and “Extrapolate” in April.

The gallery’s final exhibit, BANG!, will display the artwork of students in Hastings’ Theories of Art Practice class as well as that of a few other seniors who work with Hastings. The eclectic collection will feature paintings, sculptures, printmaking pieces and other forms of student-created art May 5–15.

Senior art major Jon Yoskin said he is disappointed to see the gallery space go because of the opportunities it provided the art department and its students.

“The Creative Space Gallery offered so much promise for a department that is generally forgotten,” he said. “Since the space was so new, the true potential of having a gallery belonging to the art department was just being discovered. It is unfortunate that it may be a while until there is another space available to pick up where the CSG left off.”

Junior art major June Ota interned in the Creative Space Gallery this semester. She said the gallery was a much–needed space for the art department and that art students will severely miss it.

“As an art major who attends all her classes basically on the edge of campus in a small shared space with a locker room for the athletes, I am angry and upset — and understanding — that we had to lose an extension of ourselves that was able to not only increase opportunities for art majors but allow us to be a part something that can really make us seem more connected to the Ithaca College campus and Ithaca community,” Ota said.

Weisend confirmed that the gallery closing was due to long-term leasing issues with the landlord of the space. Weisend said though she and the department are disappointed to lose the gallery space downtown after such a short time, plans for a future gallery space are in the works. Weisend said the department cannot comment on specific plans, but she is looking forward to future possibilities.

“I’m optimistic about the future because, really, the attendance in the gallery and the programs we were able to offer went well beyond our original expectations,” Weisend said. “It was a very positive experience, and the location was ideal. We’re disappointed about that aspect, but some of the ideas we’re considering right now are very strong that will benefit us greatly.”