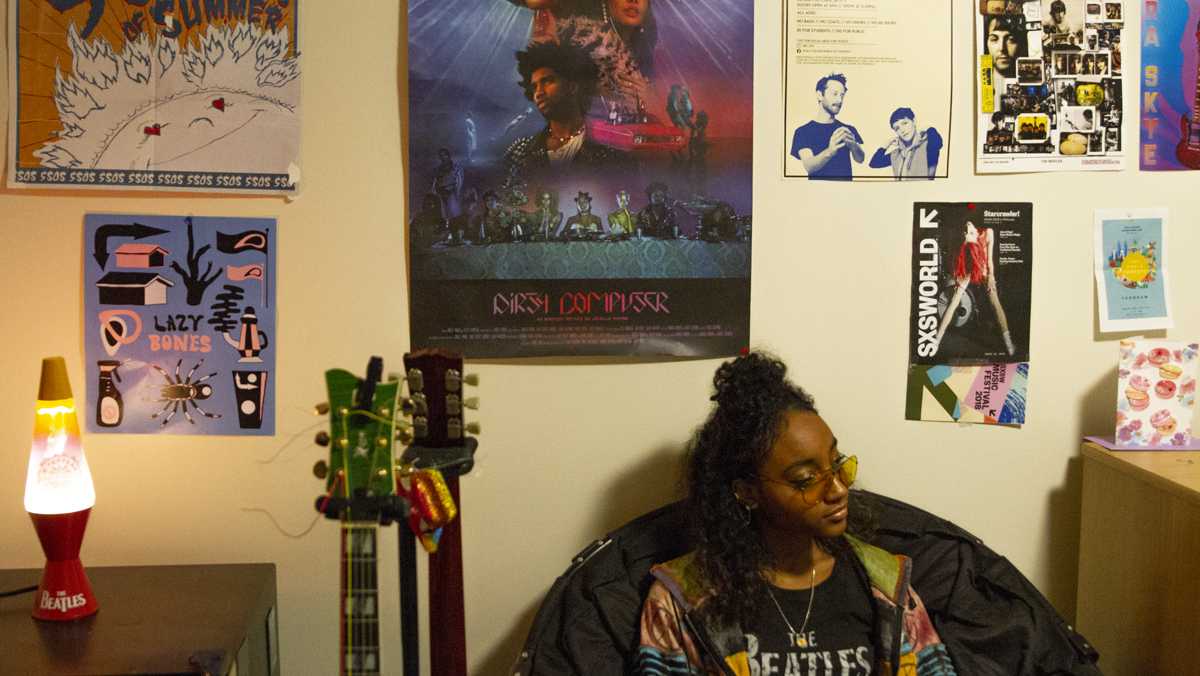 Maxine Hansford/The Ithacan
Junior Kyra Skye wrote and produced her own EP in 2017. She plays at venues in the Ithaca area and tours as the bassist of the band Izzy True from Trumansburg, New York. Her music stems from rock, psychedelic and R&B genres.
By Ashley Stalnecker
Published: February 14, 2019

Ithaca College junior Kyra Skye approaches the microphone at The Haunt, greeting her audience with a smile. She laughs and asks the crowd if they can handle things getting “a little weird.” As she begins to strum her guitar and glances back at the drummer, she unleashes one more laugh. As she begins singing, Skye is transformed, closing her eyes and swaying to the music.

Skye wrote, recorded and produced her own EP, “Summer Nights,” in 2017 before her sophomore year of college and frequently performs at local shows. She also plays bass in the band, Izzy True from Trumansburg, New York. Skye’s infectious and relaxed stage presence accents her music style, which stems from rock, psychedelic and R&B influences. She has had considerable success as a college artist.

She said she hopes to produce a full-length album before graduating from college.

“They have shown me what I am capable of,” Skye said, referring to her Izzy True bandmates. “Now they’re passing me the torch like, ‘Keep going.’”

Another defining element of Skye’s image as an artist is her unapologetically feminist philosophy. Several female artists, including Skye, are on the lineup for the Feb. 23 benefit concert at The Haunt to support Planned Parenthood. All the ticket proceeds will go to Planned Parenthood. The concert is indicative of a larger mission of Skye’s: making sure she can pave the way for other female artists to enter an industry that she is beginning to have success in.

“Having a show just dedicated to women shows other women who are interested in music that also want to do this, or might feel afraid to, or feel like their voice won’t be heard because they don’t see themselves,” Skye said. “But when they do see that, it takes one more fear and blockage off.”

Skye joined Izzy True during her freshman year of college. At the time, she was working with Ithaca Underground, a nonprofit organization that sponsors shows in the Ithaca area. Skye worked with live sound mechanics and also sold merchandise through the organization.

By chance, while Skye was training to be a sound engineer at the Haunt, Izzy True’s drummer Angela Devivo mentioned that the band needed a bassist. Skye overheard the conversation and immediately volunteered to be the band’s bassist.

But, music was a part of Skye’s life long before college and her time with Izzy True.

“Music has been part of my life since day one,” Skye said. “It’s the only thing that makes sense when nothing else does.”

From the age of three, Skye played the violin. By age seven, Skye learned to play the piano. At 12, she was playing the guitar and easily picked up the bass from there.

When she first came to college, she started as a writing major. Then, she attempted to transition into the School of Music with a major in sound recording technology. Now, in her junior year, she is a writing major with an audio minor.

Despite her success, Skye said it has not always been easy performing as a female artist in the music industry.

There is a significant lack of gender diversity in the music industry. According to a study conducted by Stacy L. Smith, an associate professor at the University of South Carolina, in the top 600 pop songs from 2012 to 2017, of 1,239 performing artists, 22.4 percent of them were women. These statistics emphasize the difficulties women like Skye can face in the music industry.

For songwriters like Skye, the numbers are even bleaker. According to the study, of 2,767 songwriters credited on the top 600 songs from 2012 to 2017, 12.3 percent were women. The study also analyzed 300 songs that were produced during the same time period, finding that the percentage of female producers is only two percent.

However, the college’s statistics about students heading into the music industry show a different perspective. According to the 2018–19 Facts in Brief, 259 of 494 music students at the college identify as female, compared to 235 students who identify as male. Skye said her experiences speak more to the college’s more balanced statistics than the Smith study. She said that, overall, she has felt supported.

Devivo said that Skye not only has a remarkable personality, but she also has remarkable technical knowledge of her instruments is as well.

“She’s a young woman of color,” Devivo said. “I feel like a couple of years ago, there wouldn’t have been the space or interest for this sort of thing, but folks are finding out that, you know, people want woman headliners and woman musicians.”

As for the future, Skye said she wants to continue writing, producing and performing music and sharing the catharsis creating music makes her feel with her audience. She said it is possible she may face the same challenges many women before her have faced. However, she wants to keep going regardless and clear the path for those coming after her.

“I might experience that too when I leave this safe bubble of Ithaca,” she said. “It might be really hard, but I know I can do it because they did too. And if they blaze a path for me, then I need to keep going and do it for all the other people who want to do the same things that I want to too.”

Skye said she wants women aspiring to join the music industry to know they will be okay.

Katie Marks, assistant professor in the Department of Writing, first met Skye in her personal essay class. Marks said Skye transformed the energy of the room with her bubbly personality.

Marks also worked with Skye in Intro to Essay and again in Image–Text Practicum. All three are writing classes in which the students mainly write personal pieces about their lives. She said that Skye makes the environment in the classroom very open for creativity and that she feels it is empowering to see a woman like Skye leading in music and songwriting.

“She’s a real role model and a really empowering figure for those who are in the audience, but also those who are thinking about putting themselves out there,” Marks said.

Since Marks first met Skye during her freshman year of college, she said she has seen Skye take more and more risks with her writing. More recently, Marks said that Skye has been able to write about topics she may not have felt comfortable tackling when she first started college.

Skye said music has the ability to bring people together, especially in a time where people are polarized over politics. Skye said, as a woman in the music industry, she not only has the ability to unify people but also to empower women.

“Music is one of the most unifying things, I think, that we people on earth can experience,” Skye said. “We could all use a bit more unity right now.”