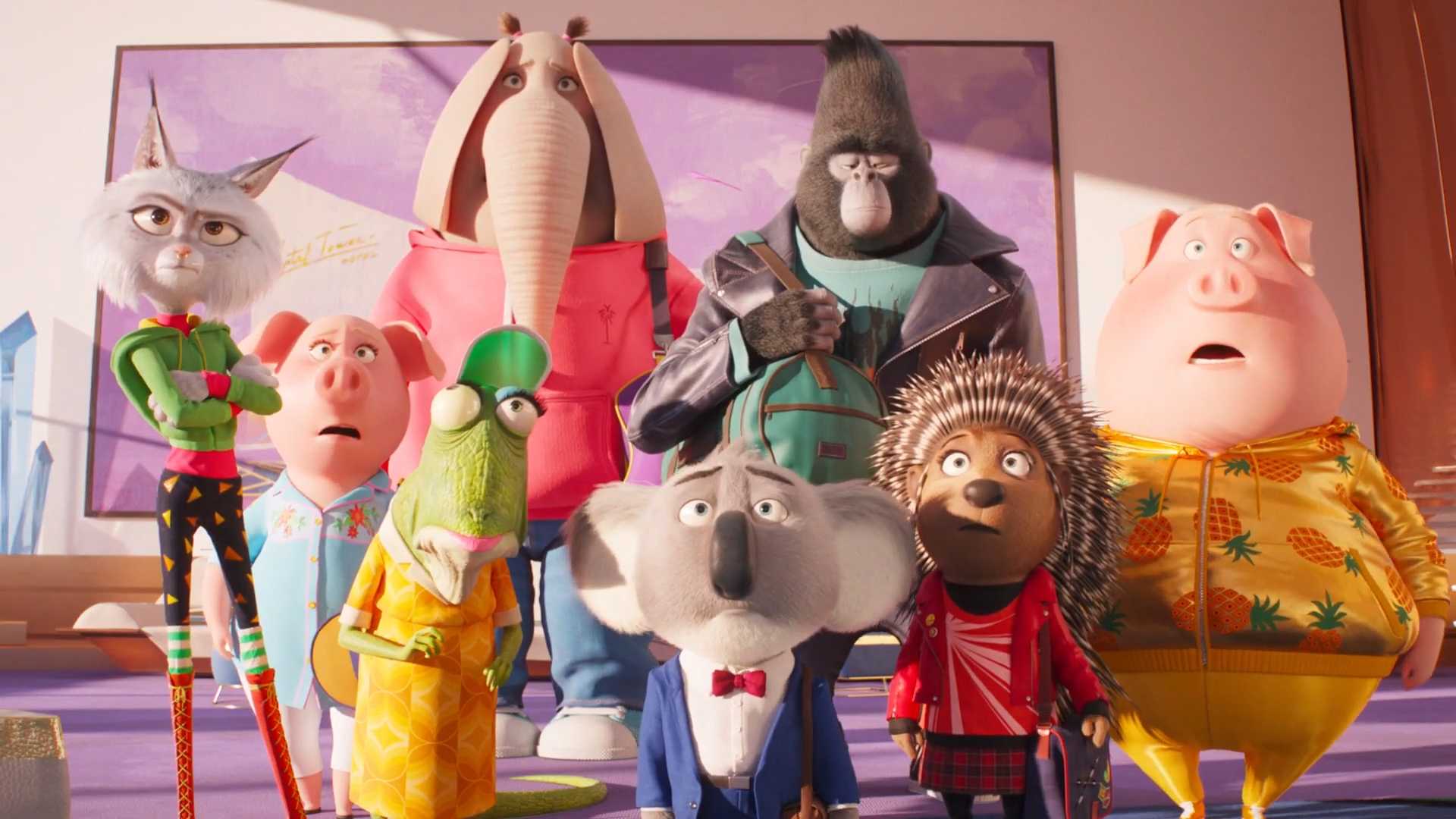 “Sing” was one of the most pleasant surprises from Illumination Studios since “Despicable Me.” Fortunately, “Sing 2” proves to be just as charming as its predecessor and preserves the franchise’s status as, perhaps, the most compelling Illumination franchise to date.

The job of a sequel is to be bigger and better. “Sing 2” delivers just that with fantastically toe-tapping renditions of popular songs (like “Can’t Feel My Face” by The Weeknd and “A Sky Full of Stars” by Coldplay), a distinctive animation style, and heartfelt voice-acting performances. At the same time, the film manages to bring back the things that made the first “Sing” so great — primarily its lovable cast of characters.

From Rosita (Reese Witherspoon), the overworked pig mother with way too many piglets to handle, to Johnny (Taron Egerton), the soulful gorilla with a rough family background, each character offers an individually compelling story. The cast comes back in full swing, continuing and completing their character arcs in an array of undeniably satisfying ways. For a major motion picture, “Sing 2” truly manages to be a labor of love. Paul Thomas Anderson crafted another classic with this comedic coming-of-age romp. Following his 2017 magnum opus, “Phantom Thread,” Anderson returns from his excursion to England and comes home for another California-set saga, adding again to his impressive legacy of earlier entries like “The Master,” ” Magnolia” and “Boogie Nights.” This time, Anderson approaches the setting in a less cynical or cerebral manner than in those other films. Instead, he utilizes a life-affirming directorial flourish more akin to the work of a filmmaker like Hal Ashby, rather than that of earlier, harder-edged influences like Robert Altman.

“Licorice Pizza” is a warm and fuzzy portrait of the 1973 San Fernando Valley, showcasing a duo of debuts with performances from Cooper Hoffman and Alana Haim. Both light the silver screen on fire with Hoffman effortlessly filling the shoes of his late father, actor Phillip-Seymour Hoffman, and Haim turning in a performance that is a once-in-a-generation revelation of magnetism and charisma. Then there are the pre-established supporting performers like Sean Penn, Bradley Cooper and a surprising appearance from “Uncut Gems” director Benny Safdie that only adds to the film’s episodic whimsy.

However there has been some criticism leveled at the film. Some critics have expressed concern over both the age gap between Haim and Hoffman’s characters and the fact that there is a repeated gag in the film that relies on an Asian stereotype. Anderson has responded to some of these critiques.

Yet, the 5–star rating of this particular review still stands. For some, a 5–star rating means a film is flawless, but this is an unreliable metric. There are plenty of terrible movies that are “unflawed.” It is the flaws of this film that make it so wonderful and so worthy of discussion. Just as the faces of the two lead actors are flawed with genuine acne as opposed to being polished over by a Hollywood makeup squad, Anderson does not fix what he undoubtedly knew some would see as “flaws” in his film and this makes “Licorice Pizza” even more of a rare and special treat. Anderson is one of this generation’s masters. His work will be long remembered as the history of Hollywood rolls on, and “Licorice Pizza” may just be one of his most heartfelt and influential films yet.

The trend of Hollywood actors trying their hand at directing and writing continues with Maggie Gyllenhaal’s “The Lost Daughter,” based on the novel of the same name by Elena Ferrante. The film follows Leda (Olivia Colman), a professor on vacation in Italy. She encounters and becomes obsessed with young mother Nina (Dakota Johnson). The audience learns about Leda’s younger self (Jessie Buckley) through flashbacks. From its strange opening sequence to its ambiguous ending, “The Lost Daughter” is an introspective and harrowing exploration of motherhood. Colman gives another excellent performance, as she effectively conveys the weight of her past actions. Even through just a glance or a look at Nina or her child, the audience understands Leda’s pain. However, the script often keeps the audience at arm’s length emotionally, with many scenes becoming unfocused and a bit boring to watch.

“The Lost Daughter” still has many effective scenes, especially early on when Nina is trying to find her younger daughter at the beach. It is an intense and exhilarating sequence that captures the fear of losing one’s child — the rest of the film unfortunately fails to recapture that energy. The moments of brilliance in Gyllenhaal’s work here make her a director to watch in the future, even if “The Lost Daughter” falls a bit flat overall.

The cultural response to the excessive French stereotypes that filled the first season of “Emily in Paris” can be divided into two schools of thought — actual dissent of how the show idolizes making fun of French people and embarrassing conflations of these stereotypes as done in the name of quirky entertainment. However, despite its shortcomings, “Emily in Paris” has returned for a second season and will be around indefinitely. The show’s sophomore effort is insufferable, and the line between intentional and unintentional ridiculousness that the first season unknowingly walked is gone. Now, it’s just stupid.

The plot of the second season — Emily focusing on expanding the ventures of the French marketing firm that she works at while hitting it off with the men of Paris — is irrelevant. All that matters is the severity of the show’s cloying stereotypes. The character’s performances are appropriate for the world of the show: both are equally cheesy.

For some reason, the showrunners thought it would be a good idea to double down on stereotyping European culture. Moving past the borders of France and into Eastern Europe, the show depicts one of the characters being a Slavic caricature of a shoplifting Ukrainian immigrant. If fans of “Emily in Paris” still think all of this is harmless, they should do a simple thought experiment — how would Mexican people feel about “Emily in Mexico”? What about “Emily in Japan”? Thebe Kgositsile, better known by his stage name Earl Sweatshirt, has lived one of the most fascinating careers in hip-hop history thanks to his fluctuating status, often switching between mainstream and underground recognition. Since the days of projects like “Doris” and “I Don’t Like S—, I Don’t Go Outside,” Earl’s worldview has matured while still engaging themes of existentialism, grief and reality. “SICK!” is a beautiful addition to the rapper’s record of the world through his eyes.

As the name suggests, “SICK!” is the result of a meditative and masterful lyricist’s experience during the COVID-19 pandemic. The rapper shifts between commenting on societal and personal truths over beats that find a satisfying common ground between his previous two releases. Like his other work, “SICK!” is brief yet fully realized, which ensures the lyrical guru isn’t releasing any sort of meaningless filler. The record is as abstract as it is approachable, with tracks like “Sick!” and “Vision” exercising trap influences. “Tabula Rasa” and “Lye” satisfy the artist’s standard of wordsmithing, reminiscent of artists like Westside Gunn and the late MF DOOM. “SICK!” is an exciting example of Earl Sweatshirt’s potential to join the pantheon of all-time lyrical greats that precede him. 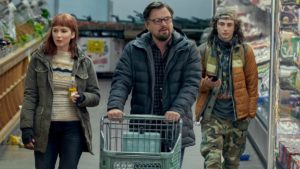 “Don’t Look Up” is a dark comedy about two scientists trying to warn the world about a comet that will inevitably destroy Earth. Brilliantly condensing decades of climate denial and debate into one existential script, the film is one of the strongest climate change allegories written this century. “Don’t Look Up” can be hard to watch at times due to how it highlights the horrific reality of climate change. The stress that scientists and environmentalists carry as they try to preserve the world while being brushed aside and labeled as alarmists can cause frustration. But humor and absurdity ground the viewer and create a pathway through the apocalyptic dread. 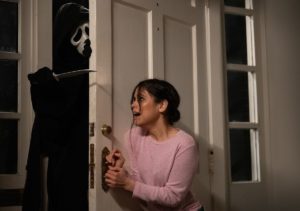 One of the staples of the “Scream” franchise is its humor and meta-commentary on the horror genre. In “Scream,” the franchise’s fifth installment, the commentary cleverly centers around film fandom and how revisionist horror has overtaken the popularity of traditional horror.

“Scream” brings back several legacy characters, including Dewey Riley (David Arquette), Gale Weathers (Courteney Cox) and Sidney Prescott (Neve Campbell). Arquette stands out the most as Dewey, providing his best performance in the franchise with heart that is typically absent from these films.

Even when the big three aren’t on screen, “Scream” is populated by a cast of new characters that are endearing in their own right. While it constantly feels like any one of them can perish at the hands of the terrifying Ghostface in gruesome and gory fashion, the viewer hopes otherwise because of how great they are.

“Scream” falters in the many moments where it asks the viewer to suspend their disbelief. While the characters make self-aware remarks towards situations just like the previous films, the viewer still can’t help but criticize the characters for some of the idiotic decisions they make, which often lead to their downfall.

Not only does “Scream” provide fans of the franchise something to shriek about, but it also gives newcomers the ability to fall in love with the franchise just as so many others have over the past 26 years.

Matt Surridge can be reached at msurridge@ithaca.edu