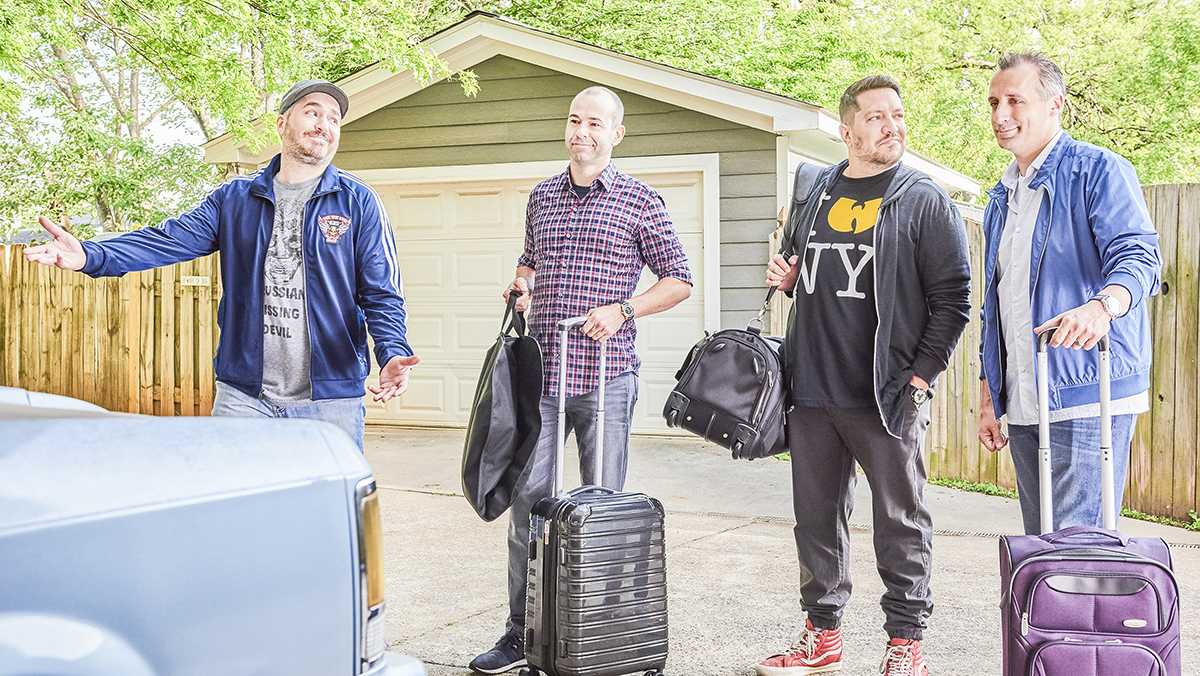 Courtesy of Funny or Die
"Impractical Jokers: The Movie" is a fun movie that anyone will be able to enjoy. The production value allows for more quality content, but the plot is lackluster.
By Jackson Noel
Published: March 4, 2020

Watching an episode of ’s hit show “Impractical Jokers” is like hanging out with a group of high school class clowns — except they are all middle-aged and have a long-running television show. Now, these overgrown jokesters have a feature-length film.

The original show has a thin premise. Four friends, Brian “Q” Quinn, James “Murr” Murray, Joe Gatto and Sal Vulcano, from Staten Island, set up hidden cameras in public spaces and dare each other to embarrass themselves through various challenges. Whoever refuses a challenge is coined “the biggest loser” and then must further endure a punishment that is selected by the other friends. Challenges range from posing as Santa Claus while completing insane tasks to pretending to be potential new hires for the Atlanta Hawks.

Late last year, the film studio Funny or Die announced a feature-length film for the show. And one question quickly became apparent — is it possible to translate a low-budget scenario-based TruTV program to the big screen effectively? Turns out, surprisingly, that it is.

In between the typical “Impractical Jokers” challenges, the film weaves together a narrative about the four guys road-tripping to Miami to attend a Paula Abdul concert. The only problem is that they only have three tickets, so the four duke it out to see who will not attend the concert. The plot is, unfortunately, a weak point in the film and is relegated to the sidelines for most of the runtime. It is emotionally weightless and lacks any serious intrigue.

Although the plot of “Impractical Jokers: The Movie” is predictable and simplistic, the movie is still appealing in its own way. The film does not pretend to be high art and persists in giving the audience a chuckle. Purely from a comedy standpoint, the film does a solid job of being entertaining and enjoyable. The jokers are naturally funny people and their friendship and presence on screen are enough to carry the entire film.

The humor in “The Impractical Jokers: The Movie” is similar to other films like “Jackass” and “Borat.” The jokes in these films are purposefully lowbrow and the content is hilariously outlandish.

Between the jokes and bizarre scenarios, the film also makes sure that newcomers and long-time “Impractical Jokers” fans alike feel welcomed. The movie is full of references to the original show, but these inside jokes never get in the way of the overall humor.

The budget of the film also elevates the content. The quality of the presentation here is much better than what can be found on cable TV. Drone shots, stronger camera work and a more cinematic color palette create an atmosphere that suits the jump to the big screen. A higher budget also means that the filmmakers were able to film in a wide range of locations. Instead of mostly taking place in crowded New York City supermarkets like in the television show, the audience gets to watch the four stars be their charming selves under the Washington Monument in Washington, D.C., and at the Atlanta Hawks stadium, just to name a few locations.

“Impractical Jokers: The Movie” flies by with a brisk runtime and steady humor. Its self-referential nature means that almost anyone who watches this wacky film will find something to laugh at.

Review: Film is shackled by bland characters and boring plot