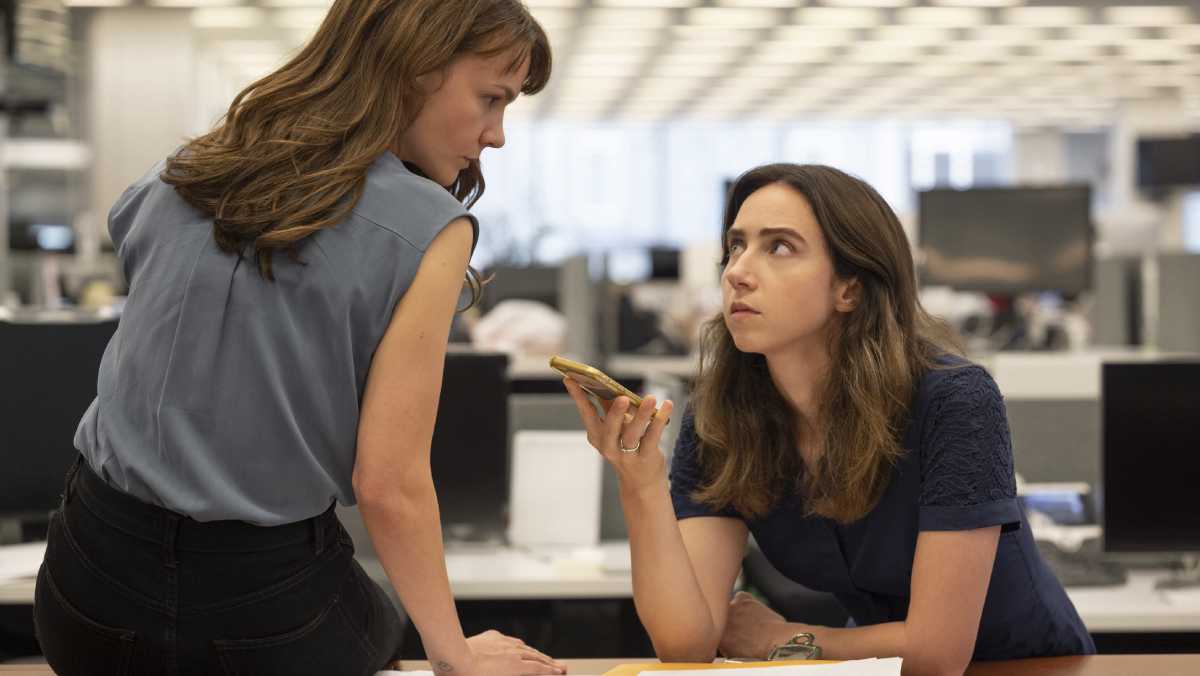 In October 2017, two journalists for the New York Times — Jodi Kantor and Megan Twohey — wrote “Harvey Weinstein Paid Off Sexual Harassment Accusers for Decades.” This report shined a giant spotlight on a massive systemic problem that was continually pushed under the rug surrounding Weinstein’s pattern of workplace sexual harrassment toward women. Written by Rebecca Lenkiewicz and directed by Maria Schrader, “She Said” does an admirable job at tackling a beast of a topic and doing its best at highlighting the event of the article as opposed to offering any additional attention toward Weinstein.

“She Said” follows Kantor (Zoe Kazan) and Twohey (Carey Mulligan) from 2016 to 2017 as they investigate and ultimately break the story on Weinstein. The film demonstrates the tireless amount of research done by these two journalists as well as the relentlessness they needed to maintain in order to combat the door continuously being slammed in their faces because of Weinstein pulling strings. In addition to showing the great lengths these women went to break the story, “She Said” attempts to highlight the individual plights that Kantor and Twohey faced as working women. Both characters struggle to find a balance between their work and home lives. Unfortunately, this dual plotting was a part of one of the film’s flaws.

The pacing in the first act is slow and manages to also be inconsistent at times. The beginning really leans into utilizing the film technique of a series of shots and tries to tackle a large window of time prior to Kantor and Twohey working together on the “H.W. piece,” as they would later refer to it.

One of the clear elements of a compelling film is having a rootable interest in the primary character. While Kantor and Twohey are easy to root for because of the fact that they are attempting to bring down a predator, the narrative itself does not lend itself to building up their characters at all. Their friendship as the two women investigate unremittingly could have been a great opportunity for an arc or even for more of the two character’s personalities to shine through, but disappointingly, it was not. Part of this can also be attributed to what the film does well: letting the survivors of these attacks tell their stories.

It would have been very easy for “She Said” to turn to trauma porn or to dramatizing the horrific events that happened to the victims of these assaults for the sake of making a more engaging film. Thankfully, this was not the case, especially as Schrader made the tasteful decision to not include a single scene of violence against women — as she said in a New York Times article, “I do not need to add another rape scene to the world.” “She Said” allows the survivors’ stories to speak for themselves while also keeping as many of the elements surrounding this story as factual as possible. Both of these culminate to make the story a faithful account of the despicable means that Weinstein went to assert his power over others. Yet, this also led to the narrative feeling a little dry at times, again because the emphasis was continuously and rightfully placed on the survivors as opposed to Kantor and Twohey. Unfortunately, if certain elements of the narrative and characters had been embellished slightly, the film would probably have been technically better but would have lacked its profound integrity.

“She Said” had pretty unengaging cinematography and editing. Everything was shot in a very objective and passive manner, which did build up the reputable tone of the film but again led to lulls when watching it. The most impactful scene is the decision to let the actual raw audio file of one the survivors play as shots of a staged hotel room were shown over top. Again, not magnifying the event for audiences but instead giving the ordeal the gravitas it deserved. The score and audio design were also pretty lackluster. While these elements did not distract from the film, they did not add anything to it either.

“She Said” is an incredibly powerful film which tackles an abuser in his own medium. It found ways to give strength to survivors and also ensure that this is the only legacy that Weinstein leaves behind. It is truly unfortunate the flaws this film had were so prominent. What “She Said” does well it does well, but it probably would have benefited from more time in development.