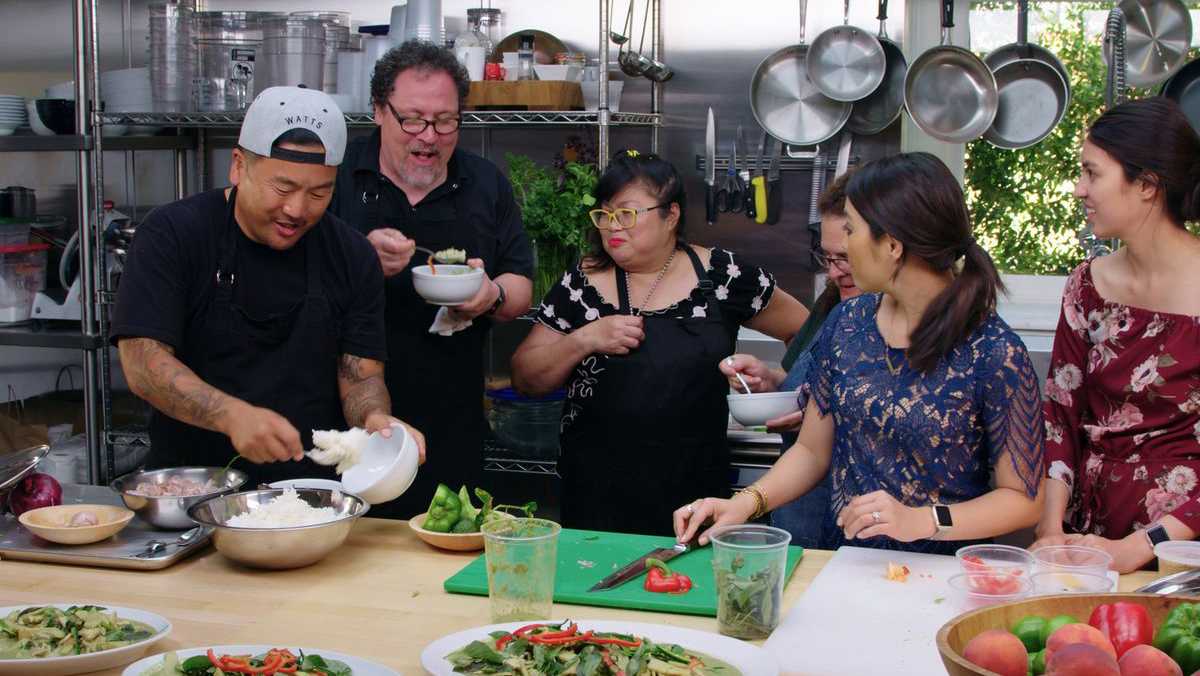 Netflix
"The Chef Show" follows Jon Favreau and chef Roy Choi as they whip up mouth-watering food. The documentary-style series is a spin off of the movie "Chef" by Favreau.
By Gabrielle Topping — Staff Writer
Published: September 30, 2019

Buttermilk fried chicken; lamb al pastor tacos; Hangtown fry; tomato carrot salad; linguini and clams; and french onion soup are only some of the many dishes that will make the viewer hungry while watching “The Chef Show.” This Netflix documentary series is a spin-off of filmmaker Jon Favreau’s 2014 film “Chef,” and it stars Favreau and chef Roy Choi, who team up to create delicious food. Every episode has a special guest who joins Favreau and Choi in the kitchen as they prepare two to four variations of a dish.

The documentary aspect of the show makes the viewer feel as if they are in the kitchen alongside Favreau and Choi. In the first episode, Choi teaches Favreau and actor Seth Rogen how to cook spicy braised chicken and buttermilk fried chicken. “The Chef Show” combines humor with some informative cooking tips, like techniques for slicing onions. For example, Rogen asked Choi if there are any tips to avoid crying while cutting onions. Favreau then joked that Rogen could wrap cellophane around his face. In actuality, wearing glasses will do the trick.

The show depicts cooking as fun and light-hearted. Although the audience watches the food preparation, there is little instruction to follow along with. The measurements of the ingredients are often based on what feels right, which develops with experience. Not only does Choi not need measuring cups for certain dishes, but, in the second episode, Chef Daniele Uditi of Pizzana knew how much heat a pizza oven would produce at various temperatures by placing his hand inside. The show portrays the chefs cooking effortlessly while consistently creating tasty dishes.

Besides filming in the kitchen, the viewer also follows Choi and Favreau as they gather fresh ingredients. In the fourth episode, Favreau and Choi join the Hog Island Oyster Company to harvest oysters using a rack and bag technique in Tomales Bay, California. These scenes diversified the show’s content. This episode also provided a different perspective on the behind-the-scenes process of obtaining oysters before they’re presented on the dinner plate at a restaurant. In this recipe, the Pacific oysters were prepared with heirloom tomatoes, lemon, jalapenos, pepper and basil.

The graphic overlays introducing every dish foreshadow the final product while informing the viewer of all the ingredients. For example, the hamachi tostada recipe in the third episode calls for corn tortillas, chile del valle, ruby red grapefruit, chives, hamachi, miso dressing and salsa bruja. The graphics and shot variation contribute to the enjoyment of the show.

“The Chef Show” is laid-back. The pleasing visuals of the fully prepared dishes entice the viewer to continue watching. In the fifth episode, Favreau twirls his linguini on his fork, blowing on it to cool it off, while Choi shovels the pasta into his mouth quickly. All involved are clearly impressed with the food prepared as they stuff their faces in the kitchen and fist–bump one another for a job well done. And just like linguini and clams, “The Chef Show” leaves the viewer satisfied.