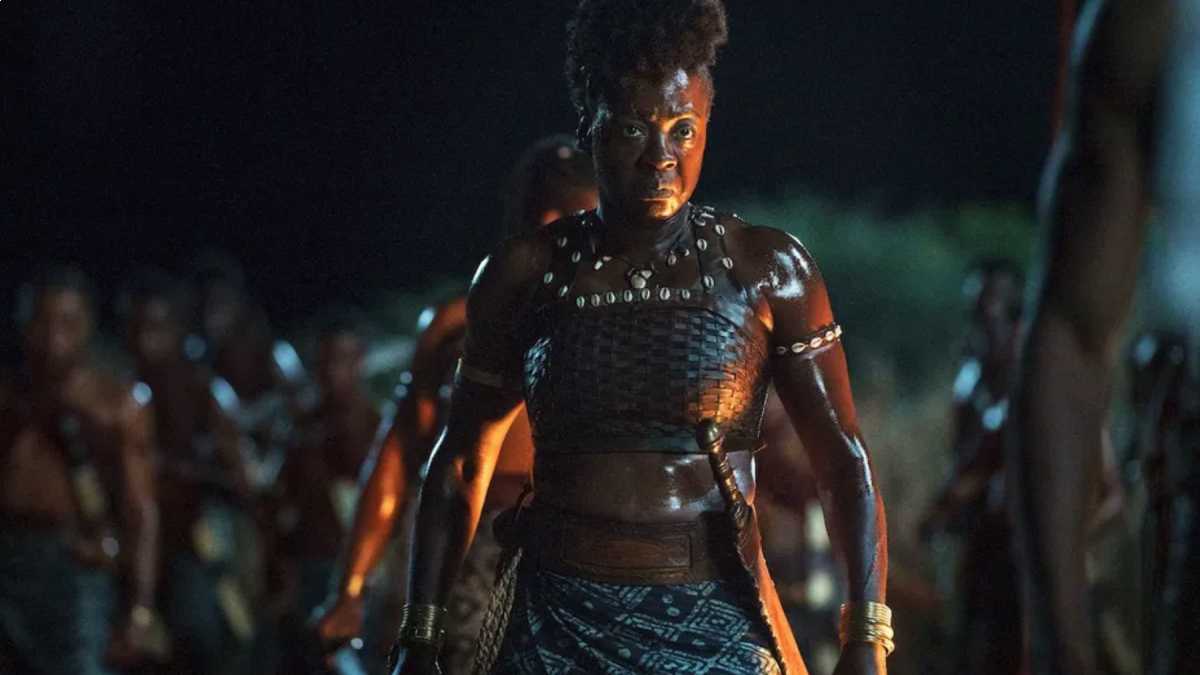 Courtesy of TriStar Pictures
Nanisca (Viola Davis), the general of the Agojie, is a force to be reckoned with in director Gina Prince-Bythewood's latest film "The Woman King."
By Sydney Brumfield — Senior Writer
Published: September 26, 2022

From the 17th to 19th centuries in the African Kingdom of Dahomey — located in modern–day Benin — reigned a fearsome all-woman army known as the Agojie. Directed by Gina Prince-Bythewood, the latest historical-fiction film “The Woman King” triumphantly tells the story of these sacred warriors, the horrors that the slave trade wreaked across Africa and the impermeable bond of sisterhood.

“The Woman King” opens on one of the most extraordinary attack sequences in modern film history. From its opening, the film only continues to excel in its excellence — especially when it comes to its fight sequences. In every single rigorous battle scene, the punches and hand-to-hand combat shake the screen, making viewers jump back in their seats. The masterful and graceful way with which the Agojie use their spears, machetes and swords to cut their enemies down to size is invigorating. These soldiers are the most terrifying and exceptional fighters that the screen has seen in years.

Despite showing some of the most fearsome warriors the world has ever seen, the filmmakers do not sacrifice the beautiful moments of joyous femininity and the bond of sisterhood. These warriors fight together, rejoice together, mourn together and sing together. No stronger force of powerful Black women has been as celebrated on the scene as the Agojie warriors. None of this, the fight sequences or the depth of emotions that the Agojie encapsulate, would have been possible without the phenomenal talent in “The Woman King.”

Not enough praise can be sung for the incredibly remarkable acting that was given in “The Woman King.” Viola Davis gives the performance of a lifetime in the primary role of Nanisca — the general of the Agojie — as she is unapologetically ferocious, tender and commanding on the screen. The supporting roles of Izogie (Lashana Lynch) and Amenza (Shelia Atim) were just as revolutionary as they captivate viewers with their on-screen presence, making audiences love as well as fear them. The youngest talent in the bunch, Thuso Mbedu as Nawi, has further cemented herself as a force to be reckoned with in the industry with her heart-wrenching performance in this film. All of these women manage to be both insatiably powerful when acting in the battle shots but also nurturing and kind when it comes time for their more intimate moments. Truly all the performances will make audiences’ jaws drop.

“The Woman King” is also a technical feat, embodying all the qualities of textbook cinema. The elite and outside–the–box narrative structure is uncommon for action films with such high caliber stunt sequences. Often, films tend to sacrifice story integrity for incredible fight sequences, or vice versa, but “The Woman King” refuses to compromise for its perfection. The script has incredible planting and payoff, as well as beautiful full–circle plotting.

The shots in “The Woman King” also have intense texture and radiance, immersing viewers in the incredibly lush and beautiful landscapes in Africa. Additionally, the lighting in all scenes, both day but especially night, is truly exquisite, helping to build up the world of this remarkable film.

This film refuses to sacrifice anything. There are genuine moments of joy, sadness, love, terror and ferociousness, and it accomplishes all of them. There are so many outstanding elements in this film that the word limitations of this article prevent the retelling of all of them. One thing is certain, “The Woman King” is inarguably one of the best films of 2022.