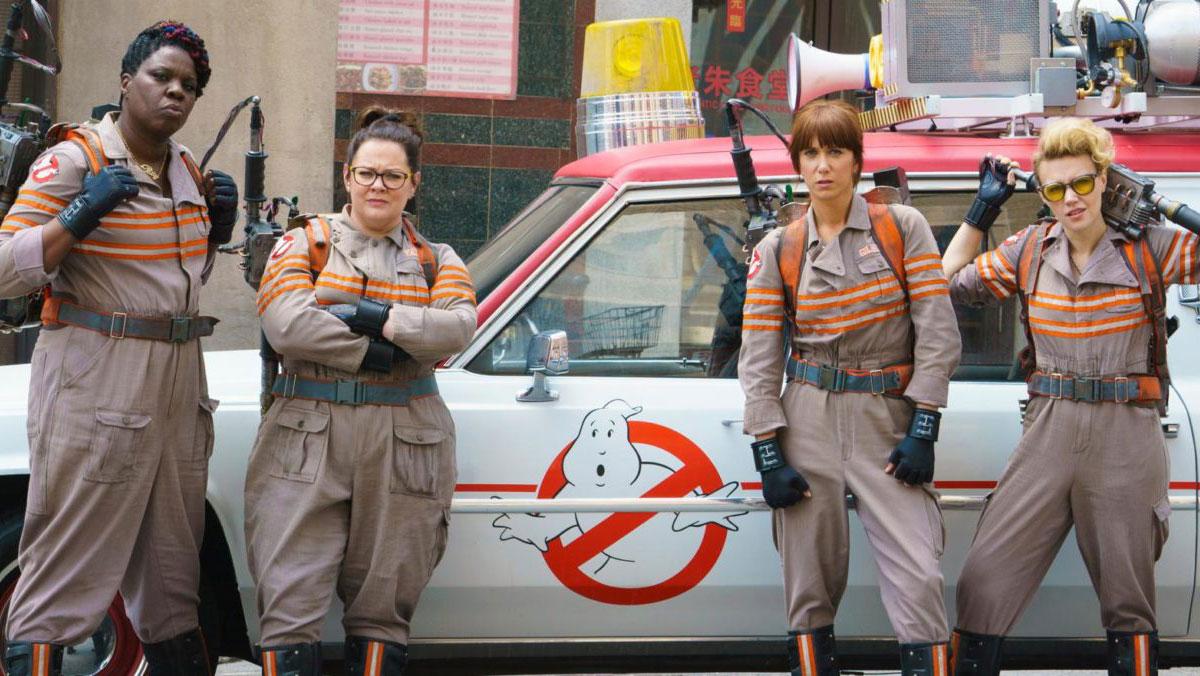 After being kicked out of their scientist day jobs because of their belief in the paranormal, Abby Yates (Melissa McCarthy), Erin Gilbert (Kristen Wiig) and Jillian Holtzman (Kate McKinnon) decide to start up a new business busting ghosts. They find an old fire house — Hook and Ladder No. 8 — and decide the digs are perfect. When their real estate agent tells them the price, Wiig bursts out laughing and says, “Burn in hell!”

It’s an eclectic mash-up of references: Skyrocketing New York rent prices are specific to the times, but that “Burn in hell” came from some graffiti found on the original 1984 “Ghostbusters” set. “Ghostbusters” directly references the old movie while trying to add its own flair. And, like most of the movie, the joke is okay … but it doesn’t quite land.

An off-kilter blend of old and new is the hallmark of any remake, and “Ghostbusters” is no exception. This reboot, however, has a twist, one that’s been widely decried ever since the project was announced in 2014: The leads in the original, played by Dan Aykroyd, Harold Ramis, Bill Murray and Ernie Hudson have been recast with Hollywood’s top comediennes. Wiig, McCarthy, and McKinnon star alongside Leslie Jones, with Paul Feig of “Bridesmaids” and “Freaks and Geeks” fame directing. For faithful fans, there are references aplenty; the film is loaded, perhaps overburdened, with Easter eggs. The plot swerves to accommodate significant cameos from everyone in the original cast, including Slimer, the Stay-Puft Marshmallow Man and a bust of the late Ramis. It’s obvious the “Ghostbusters” team put a great deal of thought into how best to bridge the gap between old and new. In the end, however, the original wins out.

It’s still unclear exactly what about women taking on the title roles would somehow make “Ghostbusters” lesser, but viewers still manage to critique the film’s protagonists. The majority of haters have staunchly denied that sexism plays a role in their dislike, saying instead that any reboot, regardless of gender, would ruin a cult classic, or that Hollywood was capitalizing on trendy PC culture by sacrificing precious childhood memories. But, despite the fact that it easily could, “Ghostbusters” doesn’t provide any obvious, overarching feminist symbolism or agenda, even though the basic premise of both “Ghostbusters” — the team saves the world from a problem that most deny exists despite ample evidence to the contrary — is a big, screaming metaphor for sexism waiting to be tapped. It doesn’t even take sweet “feminazi” revenge by forcing the team’s quirky assistant Kevin (Chris Hemsworth) to reenact the demeaning sexual objectification his parallel Dana (Sigourney Weaver) endured in the original. If the worry was that the Ghostbusters would be reduced to typical Hollywood feminine stereotypes, never fear. These women do not argue over outfits, struggle with whether to be a wife or a working woman or fight each other for a man’s attention. They’re not sexpots capturing ectoplasms while sprinting around town with perfect hair and high heels. Instead, they thwart the apocalypse in classic Ghostbusters jumpsuits, sporting normal sweat stains and dodging ghosts in shows of agility and strength. In what may come as a surprise to its naysayers, the movie doesn’t make a big deal out of the fact that its leads are female. In fact, objectively, it never has.

But the movie does, in the end, fall victim to the dialogue it’s created, but not because it lost a sexist sliver of its audience. Unexpectedly, the arguments in favor of the female leads are what hold the movie back: It’s 2016 so yes, indisputably, it shouldn’t be a big deal when four women stand in the spotlight. If that’s the case, then the singular fact that the leads are women is not enough to replicate the goofy, risk-taking humor of the original. It’s easy enough to pepper the plot with callbacks and to modernize the music and special effects. What’s harder to repeat is the freewheeling “Ghostbusters” spirit, and that’s where the new version falls short. In this way, the last fear of the sexist protestors can be assuaged, too: This reboot, like most reboots, does not outshine its original.