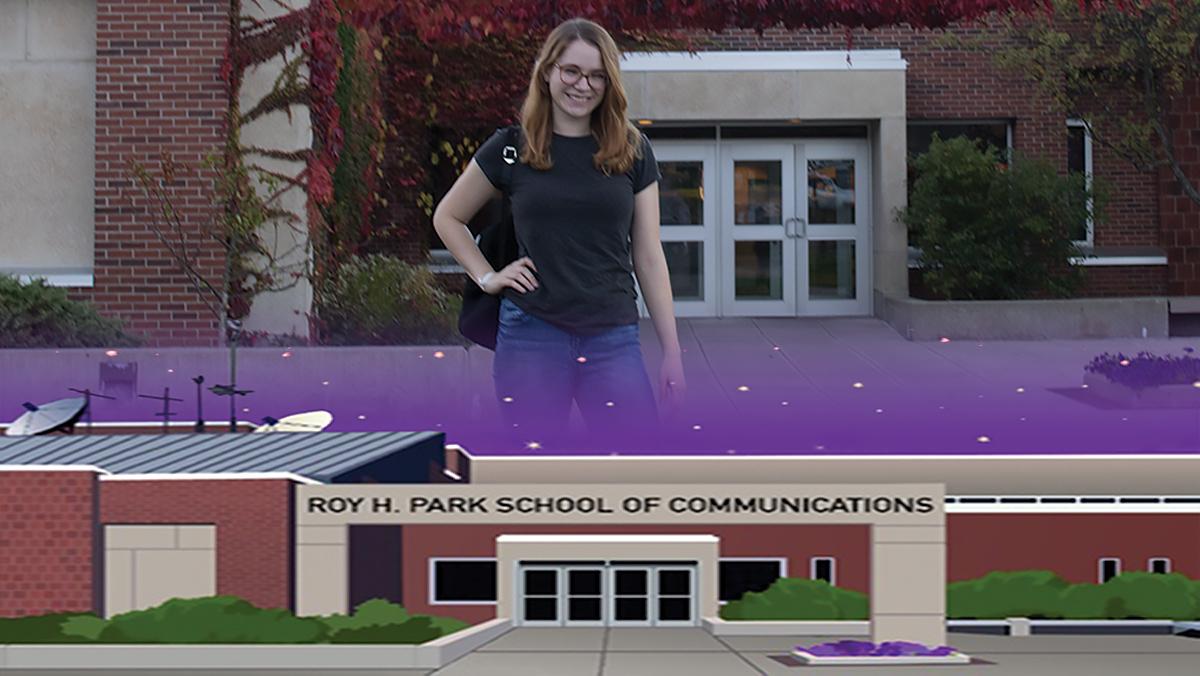 Roy H. Park Hall — among other buildings on the Ithaca College campus — now has its own mark in the world of Snapchat.

On Sept. 17, a Snapchat “geofilter” — a location-based overlay that changes depending on one’s location — for the Roy H. Park School of Communications went live.

Released in September 2011, Snapchat — the social media application that once just consisted of sending quickly disappearing pictures and videos — added a feature in 2014 that allows users to create their own geofilters.

Senior Meagan Shepherd, a television-radio major, said she noticed that there was not a geofilter for the Park School and wanted to fill the void.

“I found a picture of the building, and I just started redrawing it,” she said.

The geofilter design includes the front of Park Hall, the sign, the front doors and a purple sky with stars hovering above the building.

It took Shepherd about three days to finish the drawing in Photoshop. Then, she said, she made modifications to ensure that the geofilter adhered to the specific file-size requirements.

Shepherd also had to submit a short paragraph to Snapchat about why the geofilter would be useful and important to the community.

Shepherd said that because the geofilter is accessible to everyone in the Ithaca community, the concept behind “selling” Park had to be meaningful.

“We’re just here [in Park] all the time filming, shooting and editing, and doing all this stuff in the building,” Shepherd said. “I think the fact that you can show exactly what building you’re in and what you’re doing for the Park School helps our image because then everyone knows how committed we are.”

“The look of the Park School geofilter is fantastic because it shows the building itself,” O’Neill said. “If any prospective students come here and they have seen that geofilter, they’ll already have an idea of what the building looks like, so just being able to kind of make it more recognizable before anybody gets here is a great first step.”

Colleen O’Meara ’16, who interned for O’Neill during her senior year at the college, created a Snapchat geofilter that reads “Ithaca College” in royal blue script writing.

“I think recognition would be the biggest thing that would be beneficial for the college,” she said. “Just another way to reinforce the logo and the brand and just kind of make sure that IC’s reputation on social media is positive and cohesive.”

O’Neill said that when students create photos or videos on campus and post them to a social media platform, it helps promote the college.

“It just shows off the school in a fun way,” O’Neill said. “And I think students love to show where they go to school, as well.”

In addition to the Park School’s geofilter, several others for places across campus were recently created as well, including one for the James J. Whalen Center for Music, The Dillingham Center, and residence halls like the Towers, Hilliard Hall and Hood Hall.

Tyler Finck, the adviser at Park Design House, a co-curricular at the college that allows students interested in design, event planning and public relations to produce work for on-campus clients, created a geofilter reading “Ithaca” in a variety of colors that can be used while on campus.

“Snapchat also seems to encourage anyone. There’s no barrier to entry,” Finck said. “This isn’t something for professionals only. If a student at IC, or high school, or even younger made a good-looking geofilter, I think it would end up in the rotation.”

O’Neill said that in past years, it was difficult for schools to create their own geofilters because Snapchat did not allow logos or other forms of branding to be used.

“The University of Michigan has quite a few connections with Snapchat, and so they were able to kind of influence them and let them know that it’s difficult for schools,” O’Neill said. “To be able to utilize logos is helpful for schools. So actually, Snapchat changed and made an exception for colleges and universities because of that.”

O’Neill said it is important that everything done on social media has a purpose with the goal of reaching an audience. He also said being personable will engage more people.
“I think that those are some things that colleges and universities are striving for,” he said. “Engagement is always the biggest key for social media. We want to engage our audiences, whether they be students or prospective students, alumni, parents.”