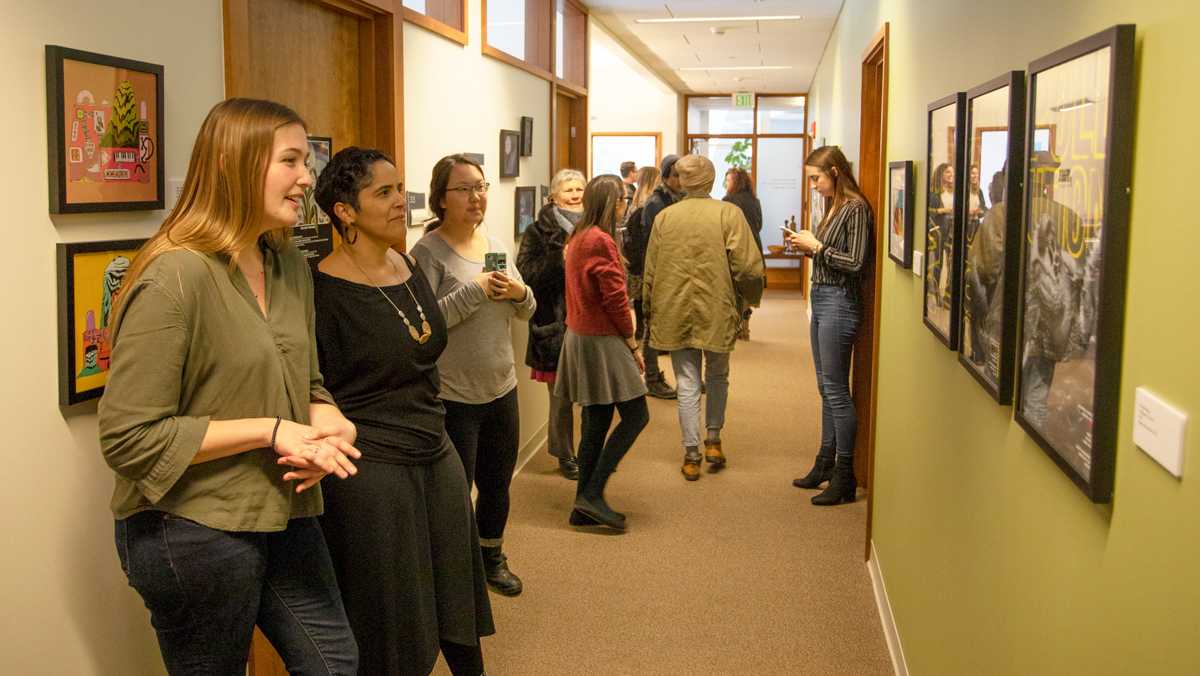 Connor Lange/The Ithacan
Every year, Bill Hastings and Sarah Sutton, assistant and associate professors in the department of art, select student art to be displayed in the Provost wing on the third floor of the Peggy Ryan William Center. On Feb. 26, the administration hosted a reception to celebrate this year's featured artists. this is also the first year the installation included photography.
By Ash Bailot
Published: March 7, 2019

The typically quiet hallways in the third floor of the Peggy Ryan Williams Center at Ithaca College became crowded and noisy Feb. 26, full of staff, faculty and students discussing the new installation of student artwork.

On the third floor of the PRW Center, which houses various administrative offices, student artwork hangs on the walls with labels to the side of each picture indicating the artist, title, year and medium. In the next hallway over, student photography is also on display. Oil paintings, digital prints, drawings and digital photography line the hallways as a way to display student creativity and talent in a place that can sometimes seem disconnected from campus. The Office of the Provost first organized these installations four years ago when the initiative first started under former President Tom Rochon and former Provost Ben Rifkin.

Bill Hastings, Sarah Sutton and Dara Engler, assistant professor and associate professors in the Department of Art, select art to be hung in the administrative wing at the end of each fall semester. Hastings said they try to show a variety of works that stay on display for a year until they’re replaced each spring.

While the art department has been supplying art for the past four years, this semester was the first time that student photography was put on display. In the Risk Management wing, each photo is accompanied by the photographer’s name, the class it was taken for, the medium it was printed with and the year. There are photos from Introduction to Photography all the way to Large Format Photography. The Roy H. Park School of Communications sends in the photos separately from the art department’s selection process.

Senior Matthew Palmeri’s abstract, urban landscape–themed screen prints are on display on the third floor of the PRW Center. He said he is glad the college is providing a place for students to show their work because there are not many chances to do so on campus.

“It’s just nice that they’re willing to approach students and ask for art,” he said. “It’s a cool thing for the provost to be doing.”

President Shirley M. Collado attended the art reception, greeting other attendees with a smile and a hello and showing appreciation for the artwork. She emphasized the need for art in public spaces like the PRW Center.

“Art in public spaces, where people work or where they come together in a common area, is critical for the health of our society and for the health of our humanity,” Collado said. “The student art and photography that we have on our floor brings this space to life while honoring the tremendous talent, creativity and self-expression of our amazing students.”

Before the display in the PRW Center, the only place to regularly showcase student artwork was the art department in the Cerrache Center. Due to its location on the very edge of campus, it’s unusual to see anyone besides art students and professors in the hallways. Displaying art in the Office of the Provost is a step forward, but it’s unlikely that the display will receive much more student attention than Cerrache does because of its location. The third floor of the PRW Center houses the Office of the Provost, the Office of the President, and the Division of Finance and Administration, to name a few. The provost office has the means and the incentive to actively support student artists, but the third floor of the building is not a central location on campus that students, faculty and others pass through often. Regardless, Palmeri said he and the other students were excited for the chance to display their art, even if it’s not in an area often frequented by the campus community.

“I’m glad that the school is providing a place for students to show work, especially on campus, because we don’t have a lot of chances to do that,” Palmeri said. “I think it’s a great opportunity for students to get their work out there.”

Senior Isabel Goldberger has several of her large oil paintings on display in the administrative wing. These brightly colored paintings depict people with their instruments and are reminiscent of Picasso’s surrealism. She said she is excited to have her work displayed but disappointed that it won’t be seen by many students because of its location.

“I’m excited about my art being here. There’s not much opportunity to show art on campus,” she said. “It’s a little disappointing that there’s not much attention given or places to display artwork on campus.”

MaryAnn Taylor, executive assistant to the provost and senior vice president of academic affairs, said that despite the third floor being rather far from the center of campus, the art display brings students to the Provost office occasionally, fostering communication and discussion between students and the administration.

“About four years ago, we noticed that the walls were so bare, so we reached out to art professors,” she said. “We thought it might be a way to bring students up here, to look at artwork. We just want to make this a more welcoming place for students and staff to come and visit.”

“Our goal is to be student–centered, so why not have a place where they can display the great work they’ve been doing?” Israel said. “I do think it’s brought over students who may not have ever been over here to the provost office. They get to know us, and we get to know them, and it’s just another way to network.”

Student artwork receiving attention from people outside of the art department was a motivation for most people involved. Steven Skopik, professor in the Department of Media Arts, Sciences and Studies, said that getting student work seen by more people is something the art and photography departments are constantly trying to do.

“The art and media world can be a little hermetic, so from my point of view, we’re always looking for opportunities to share what our students do with the larger campus community,” Skopik said.

Skopik coordinated the photographs for the new display. He said there was interest in the provost’s office in expanding the art exhibition to encompass more of the administrative offices on the third floor, rather than just in one of the two hallways. The photographs were selected by students in Photo Workshop, a capstone course for students in the cinema and photography program. They learned how to prepare photos for exhibition and used their experience in this show to practice for their own workshop exhibition at the end of the semester.

Freshman Julia Bertussi’s art is hung near the entrance of the hallway. She arrived at the reception and said she was immediately welcomed by the administration, who were eager to ask her about her work.

“I talked to President Collado, and it was really nice to explain my art to people,” she said. “I really enjoyed it. People want to see what others are capable of. People like to see other students doing their thing, what they’re talented at.”

Bertussi said that for her, having her artwork on display allows her to display her talents and inspire others in the process.“I think we go through all the trouble of selecting the work and hanging it up so that students can show their work — show what they’re capable of — and so other students can see it and hopefully be inspired,” Bertussi said.