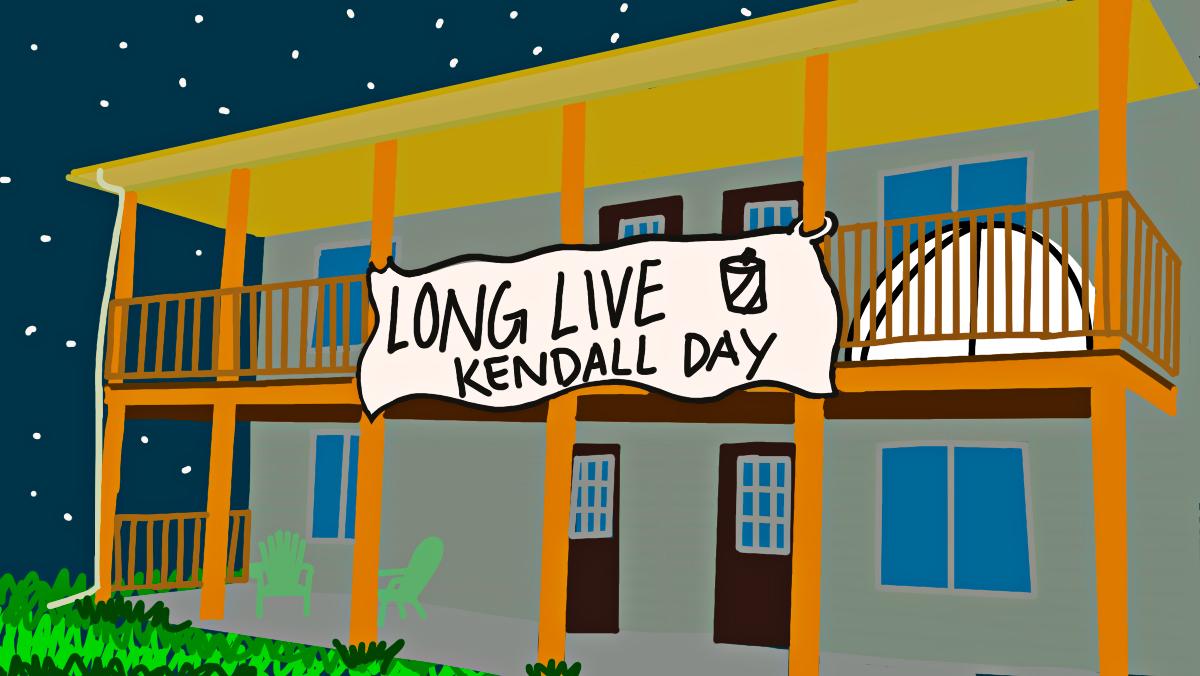 Ithaca College has inhabited many forms. Before the college settled on South Hill, there was the Ithaca Conservatory of Music, a music school founded in 1892 that ran out of four rented rooms in a house on East Seneca Street.

Over the decades, the music conservatory slowly took over old downtown theaters and rooms above storefronts. On South Hill in 1960, the first campus building — Egbert Union, now called the Campus Center — was erected. Since then, the campus has continued to grow, and with each generation of students comes new traditions and stories.

This year’s new students spent their first semester off campus and therefore have not had the chance to hear the urban legends and histories passed among students. The Ithacan’s Life & Culture section has compiled a list of stories, terms and traditions that students should know about the college’s culture as they settle into campus life.

Pubs before “The Pub”

“The Pub” is a common nickname used by students to refer to IC Square, a campus food court in the Campus Center, but there is some history to this nickname. According to the Feb. 12, 1987 edition of The Ithacan, the pub and coffeehouse sold non-alcoholic drinks from 11: 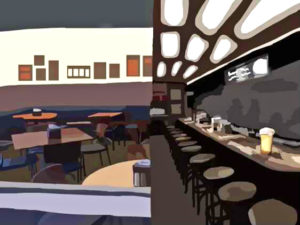 Roger Eslinger, former director of Campus Center Student Activities and Conference and Event Services, worked at Ithaca College until 2002. Eslinger said the first on-campus pub was located on the floor below where Towers Marketplace currently is. He said that in the early 70s, the pub moved to the second floor of the Campus Center, then called Egbert Union, where it remained until 1986.

Eslinger said students used to walk down from the library around 9:30 p.m. to enjoy drinks at the Egbert Hall pub before heading back to their dorm rooms for the night.

The pub was student-run, with students working as servers, bartenders and managers. Eslinger said that working in the pub was as much an educational experience as it was a job. Workshops were held to teach student employees about management, communication and teamwork.

Faculty members would make brief appearances in the pub to connect with students in a more casual setting outside of class, Eslinger said.

“The power structure was taken away when the faculty member wasn’t standing at the head of the class and being all-powerful,” Eslinger said. “When he came to the Egbert Hall pub, everybody was on equal ground, and that was done on purpose.”

In the mid-80s, Egbert Hall underwent a renovation, Eslinger said. IC Square was completed in 1987.

The Feb. 12, 1987 edition of The Ithacan explains that the pub and coffeehouse concept was implemented to make the space inclusive to students who were both under and over 21 after the drinking age was raised from 19- to 21-years old in 1985.

Eric Howd, assistant professor in the Department of Writing, graduated from the college in 1990 and said he remembers playing keyboard in his band at the pub and coffeehouse when he was a student. Howd said there was a triangular stage located in the corner near where Ithaca Bakery is today.

“It was just a blast,” Howd said. “It was really sad to see [the pub and coffeehouse] go, but I can see why they took away the alcohol and the stuff like that, and I kind of like referring to it as ‘The Pub’ still.”

Now, The Pub is officially called IC Square, a food court–style dining area with no alcohol in sight.

Every college town has a bar that students flock to on the weekends — and sometimes the days preceding. Prior to the COVID-19 pandemic, two popular go-tos for students at the college were Moonies Bar & Nightclub and Silky Jones, both on the Ithaca Commons.

Silky Jones — known for its LGBTQ nights on the first Thursday of every month — permanently closed earlier this year. The future of Moonies is uncertain, said senior Henry Feigen, who is a DJ associated with Moonies.

Senior Shane Fox said the bars are an essential part of the undergraduate social experience at the college.

“They were the places you went to meet people, and it helped you socialize with your peers,” Fox said. “It was a staple for all of the students who went to the college.”

While Ithaca College does not recognize any Greek life, fraternities like Alpha Epsilon Pi (AEPi), Delta Kappa Epsilon (DKE) and Kappa Sigma (KE) run off campus. Greek life was banned from campus after a student died in 1980 as a result of hazing during a Delta Kappa fraternity’s initiation. If students want to experience Greek life, they typically make the trek to Cornell University.

Crushed beer cans strewn across a field. Drunk college kids. Kegs open to celebrate the end of a semester. This is Kendall Day, the annual block party on Kendall Avenue, a road behind the South Hill Recreation Way trail. The party is attended primarily by Ithaca College students. 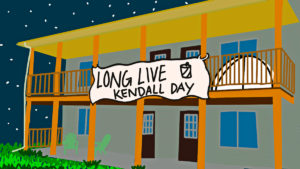 On the Saturday before finals week in May, students celebrate the end of classes and sometimes the warm weather.

Kendall Day is a “darty” — a “day party.” Kendall Day-related celebrations began in 2008, when Adam Young ’09 and a group of friends hosted the first, massive party at 164 Kendall Ave. Twelve years later, the celebrations have become a day of tradition similar to Cortaca, the annual football game between the college and SUNY Cortland.

Senior Alessandro Vecchi said the event is humorous to him because of the timing — partygoers head to the event, typically inebriated, a few days before finals week starts. But Vecchi said that having the event during the daytime actually allows for studying the rest of the day, if necessary.

“I think it reminds people that while academics is a priority for most people, it’s okay to take a day for yourself,” he said. “It’s the weirdest way of saying, ‘Self–care is good.’”

Kendall Day has had a long history with police. In 2015, there were six arrests for disorderly conduct — approximately 3,000 people attended — as well as consumption of alcohol under the age of 21.

Senior Kate Sinclair said she remembers going to Kendall Day in 2018, her freshman year, with some friends on her floor of West Tower.

“I feel like people will definitely go hard on Kendall Day,” she said. “It’s so crazy thinking about that now with COVID, having that many people in one congregated space. But I feel like it, especially as a freshman, … [was] a new sense of freedom.”

Not everyone participates in the morning’s festivities. Richard Ramos ’20 said he did not participate in Kendall Day while at the college.

“I’m not the type of person that goes to too many parties per se,” he said. “Near the end of the semester, there’s a lot of exams at that point that I prioritize.”

Kendall Day was not thrown in 2020 because of the COVID-19 pandemic and because the majority of students were not living in Ithaca after Spring 2020 classes transitioned online. 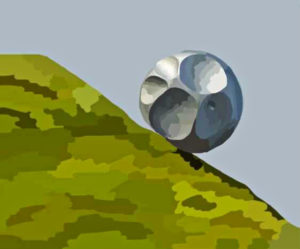 The sculpture that stands proudly atop Textor Hall has been the source of hypothesis and folklore for students ever since it was installed back in 1967. The structure goes by many names, including the Textor Ball, the Fish and even the golf ball from the gods. While the official title of the sculpture is the Textor Disc, that fact has not dissuaded curious students from their speculations.

One urban legends surrounding this ambiguous piece of art is the legend that if a virgin graduates from the college, the ball will come loose and roll down the hill.

The structure was created by Jack Squier, an artist, Cornell graduate and former Cornell professor.

In an interview with The Ithacan in 2014, Squier said the sculpture was created by embedding a steel frame in foam, encasing it in resin and fiberglass and then covering the structure with aluminum leaf.

“It’s an abstraction based on a series I did called ‘Heads,’” he said in the interview. “This was a big version of one of them. [I] decided to call it a Disc to keep it from sprouting mustaches.”

The Ghost of East Tower Past

The elevator doors don’t open sometimes. They stop on random floors without being prompted. Sometimes, they just stop working entirely. With all the mechanical issues the residence hall East Tower elevators have, it’s no wonder students say they’re haunted. 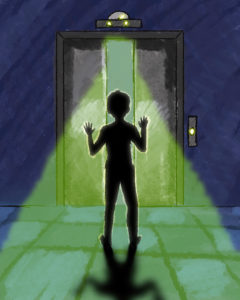 “It always stopped on the 9th floor, and then it would randomly go all the way to the 13th floor and not stop at all,” Teachout said. “And then it would go all the way back to the ground floor. It was weird things like that that would leave you scratching your head. You’re waiting for it and the lights start flashing and then you go, ‘I’m going to take the stairs.’”

Teachout said students in East Tower became more cautious of the elevator after a room on the 10th floor caught fire in Spring 2018. Water damage from the sprinklers made the elevators even less reliable.

“It was at that point I personally had given up on the elevators and stuck to walking up the stairs,” Teachout said.

Junior Jennifer Peisner said she lived on the sixth floor of East Tower her freshman year and once got stuck in the elevator for 30 minutes. She said she went into the elevator, the doors shut, the elevator moved a foot and it stopped.

Peisner said she tried to call campus security, but her phone didn’t have any service, so she had to yell to one of her friends to call them for her.

“It wasn’t really scary because I was on the first floor,” Peisner said. “If the elevator dropped, it would have dropped, like, a foot, and I would have been completely fine. But it was a pretty interesting experience.”

Teachout said they don’t think the elevator is really haunted.

“It’s one of those silly things that people make up because sometimes it’s more fun to blame extraterrestrial beings and spirits and energies rather than just saying what it is,” Teachout said.

Don’t jump in the fountain before graduation … Or else

The Dillingham Fountain, with its five geysers overlooking Cayuga Lake, is one of the most iconic features of Ithaca College. The fountain is also a location rooted in tradition, as every student looks forward to plunging into them on graduation day for Senior Splash.

Teachout, a president’s host, said the hype for Senior Splash starts during the campus tours before students are even enrolled. Part of the tour involves warning prospective students not to jump into the Dillingham Fountain before Senior Splash or risk not graduating due to bad luck, Teachout said.

Teachout said the president’s hosts speculate that the story was created by the administration to limit the number of students jumping in the fountains. 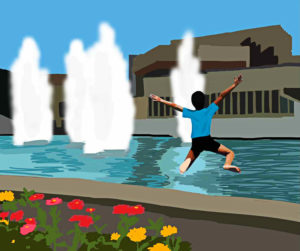 “It makes your Senior Splash a little more special,” Teachout said. “You finally get to jump in with your entire class and have that moment of finally being done, even though it’s usually freezing cold and not really worth it. But it is worth it because it’s the thing that they marketed to you since going on your first tour.”

“It was more of a rebellious type of, ‘They don’t want us to do this, so we’re going to do it anyway because we’re seniors that deserve it after four years,” Howd said. “I purely remember it as an act of defiance and rebellion of the senior class.”