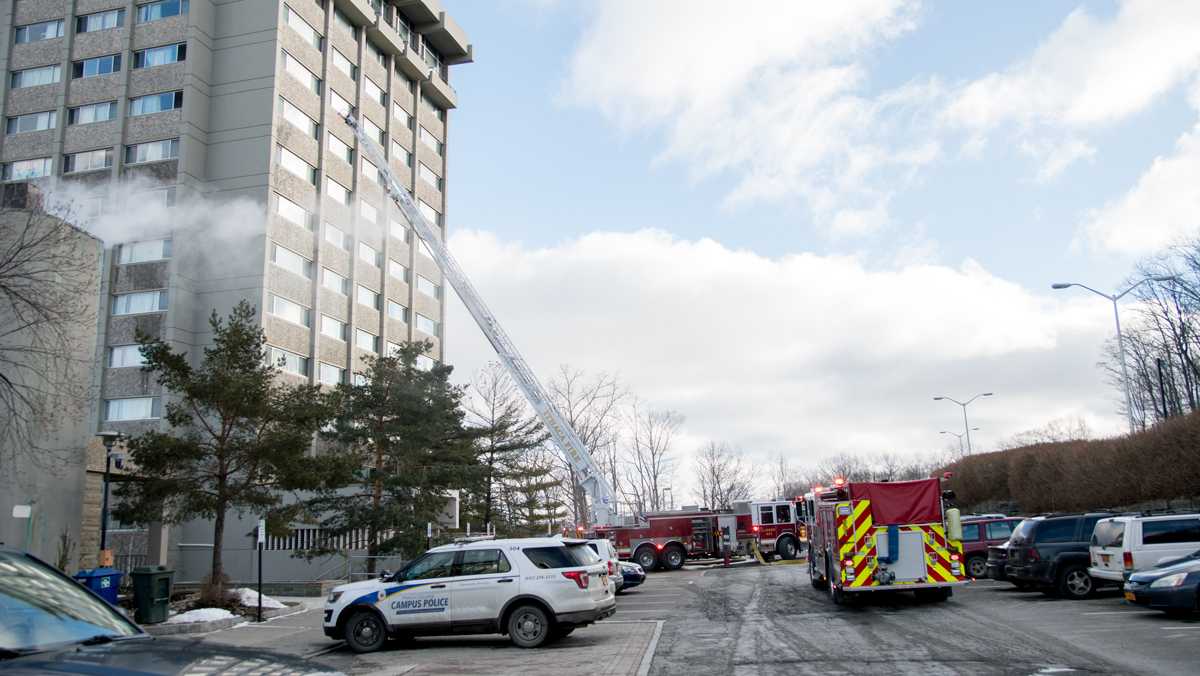 Kristen Harrison/The Ithacan
A fire broke out on the 10th floor of East Tower the morning of Jan. 25.
By Madison Fernandez — Assistant News Editor
Published: January 25, 2018

Residents of East Tower have moved back into their dorms and are recovering their damaged items after they were displaced by a fire that occurred on the 10th floor of the residence hall Jan. 25.

The fire started at approximately 8:55 a.m., according to an email sent to students by Thomas Barkal, residence director of East Tower. Students were evacuated from East Tower after safety personnel from the college reported heavy smoke in the hallway of the 10th floor, which activated the sprinkler system, according to the Ithaca Fire Department’s Facebook page.

The fire was contained to a single room on the 10th floor, an Intercom announcement sent by Dave Maley, senior associate director of media relations, said.

No one was injured in the fire.

The fire was caused by an improperly used hot plate, according to a release from the Ithaca Fire Department.

Michael Leary, assistant director for the Office of Judicial Affairs, said he cannot share if the individual who caused the fire is being judicially referred.

The 296 East Tower residents were directed to West Tower during the fire, where staff was available to assist students with notifying professors about missing class or to obtain appropriate winter clothing.

Freshman Samantha Rachmuth, an East Tower resident who lives on the 11th floor, was asleep when the alarm went off. She said that the residents were expecting to have a fire drill and that she did not think it was an actual fire.

“As soon as you got to 10, you just, your entire face was just smelling of fire,” Rachmuth said. “It wasn’t a lot, but you could definitely smell it.”

East Tower, with the exception of the 10th floor and select rooms on the ninth floor, reopened at 5:30 p.m. Jan. 25, Bonnie Prunty, director of the Offices of Residential Life and Judicial Affairs, said. Residents who live in these rooms were assigned temporary housing in vacant rooms on campus unless they had friends they preferred to stay with, she said.

Prunty said that more than half of the residents took advantage of the assigned rooms.

“In some ways, I’m not completely surprised by that because it is a first–year building, so the likelihood is that the students who students know best are the ones that live on their floor,” Prunty said.

Freshman Grace Dury, a resident on the ninth floor, stayed overnight with her roommate in an unoccupied room in Lyon Hall. She said the Office of Residential Life was helpful in assigning displaced students to new locations for the night and explaining the extent of the damage.

“It was nerve-racking because nobody knew who was most affected,” Dury said.

The displaced residents were notified that they regained access to their rooms on the afternoon of Jan. 26, according to an email from the Office of Residential Life.

In order for staff from the Office of Facilities to dry the carpets after the sprinklers went off, the rooms needed to be emptied. Prunty said each room had a trash bag full of personal belongings that were on the floor and damaged by smoke and water. These bags were taken to the Ithaca College warehouse, where students were shuttled to sort which items they wanted dry-cleaned, kept or thrown out, she said.

Freshman Daniel Gonzalez, a resident on the 10th floor, said he had to throw away some of his shoes, books and notes, as well as his laptop charger. However, he said that he thinks the college handled the situation well.

The majority of the items in the warehouse have been claimed or sorted, Prunty said.

Prunty said the college will reimburse students for damaged belongings that insurance does not cover, or if the student does not have insurance.

Although all the residents are back in their dorms, one of the two elevators was damaged by water and both elevators have been working inconsistently since the fire, Prunty said. She said she is unsure when both elevators will be working correctly.

Prunty said that no new safety precautions are being implemented as a result of the fire, but that the Office of Residential Life is continuing to reinforce the importance of avoiding using prohibited items in residence halls.