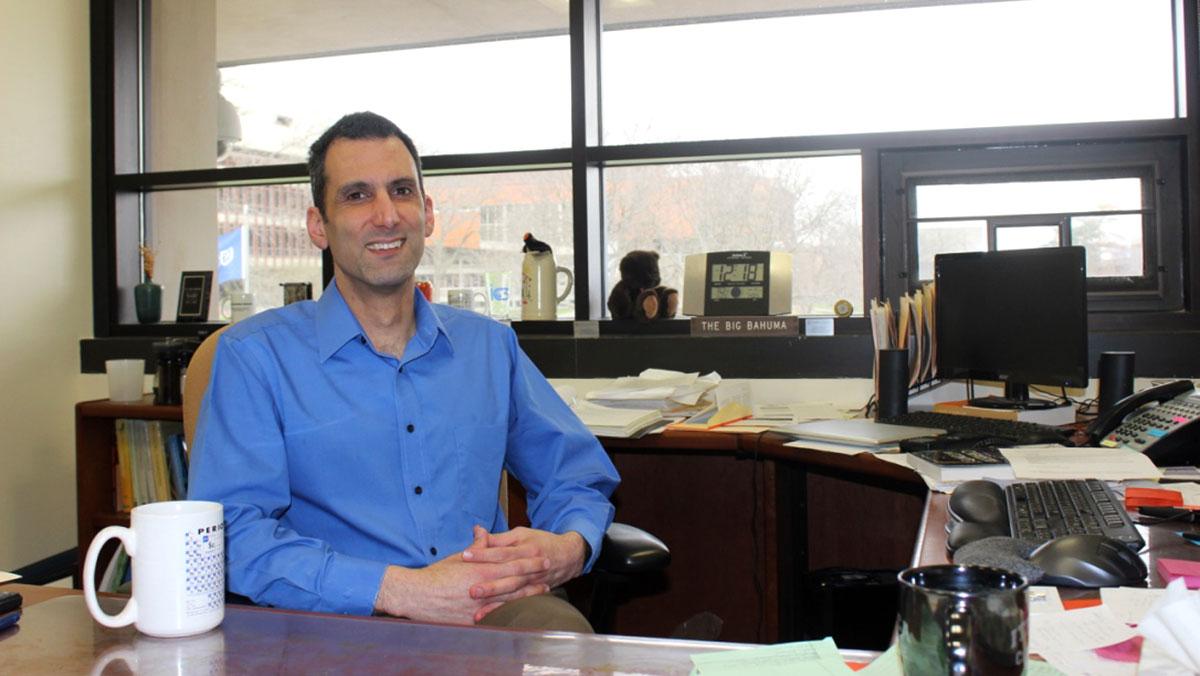 Anna Lamb/The Ithacan
Vince DeTuri, director of the Integrative Core Curriculum, has been in the position for a year. He's spent his time trying to pass more policies to better the ICC and work with professors to create more ICC classes. However, student and faculty criticism still exist that the ICC has flaws that aren't being addressed.
By Anna Lamb, Grace Elletson — Staff Writers
Published: May 8, 2016

A year into his tenure as the Integrative Core Curriculum director, Vincent DeTuri said he and the Committee on College-Wide Requirements are planning to make the ICC more manageable by changing some of its requirements after facing complaints among faculty and students that there are still many problems with the ICC.

DeTuri said some of the policies the CCR has passed include removing themes from Ithaca seminars, making it easier for freshmen to complete the seminar requirement; allowing students to petition for ICC credit for classes taken abroad; and designating 88 classes to meet ICC theme requirements, to be available in the fall. One of the biggest concerns students express about the ICC is that there are not enough classes to meet requirements.

These 88 newly designated ICC courses are among 224 total ICC courses being offered in the fall. There are 75 courses in the Identities theme; 22 courses in the Mind, Body, Spirit theme; 37 in the Inquiry, Imagination and Innovation theme; 43 in the Power and Justice theme; 15 in the Quest for a Sustainable Future theme; and 32 in the World of Systems theme.

Since its inception, the intention of the ICC has been to bring a broader perspective of learning to students by having them take courses outside of their majors under a specific theme and to help ensure the college would stay accredited by having a collegewide general education curriculum. This past January, department chairs, deans and associate deans attended an academic leaders meeting to identify problems with the ICC and possible solutions to those problems.

Some of the problems that were identified are that transfer students have a difficult time getting ICC credit for the classes they took at a different institution, there are too many themes and there are not enough class choices within each theme.

DeTuri said the committee has gone through the list and prioritized certain issues that he plans to address next year. He said he did not want to comment on what the prioritized problems are because he said he has not gotten student feedback on what issues they want to see prioritized and corrected within the ICC.

Sophomore Ben Beatty, who is in the Inquiry, Imagination and Innovation theme, said he was interested in a class called Writing for the Workplace, which is outside of his major. However, he was not able to get into the class because of the small size and restriction to certain majors.

“Not only is it about 14 seats, but it’s completely locked to majors and minors,” Beatty said. “You can override as much as you want, but you’re not going to get in.”

Junior Emily Heerd will be a part of the first class to complete the ICC as a graduation requirement. She said she struggled to find classes to fill her ICC requirements.

“I was able to complete it on time, but my theme — Mind, Body, Spirit — has so few options that it took me forever to fulfill the requirements,” Heerd said.

DeTuri said he has not found any inherent structural problems with the program, and more classes will be created as professors approach him with ideas.

“I actively work with department chairs and deans about offering additional ICC–designated courses and offering more sections, and I also work with faculty about getting courses proposed for ICC designation,” DeTuri said.

A professor, who wished to remain anonymous to preserve working relationships with people who are involved with the ICC, said he thinks the reason not a lot of faculty members are actively creating ICC courses is because the program did not have sufficient faculty support when it was created and deployed by the administration. He said many faculty members do not want to create ICC courses due to the paperwork, the extra work involved with the e-portfolio and the fact that there is still a lack of support for the curriculum.

“They didn’t get buy-in and agreement in a robust enough way to guarantee that there will be enough classes offered forth by the faculty to populate the ICC,” he said.

Susan Delaney, assistant professor in the Department of Writing, said she thinks while there may be some functionality problems now, the ICC system as a whole is a good one. She agreed with DeTuri and said the ICC provides students the unique opportunity to engage more deeply in their education by making connections across their courses.

“Some things have not gone the way we thought, while other things have gone much better than we originally thought,” Delaney said.

DeTuri said he will continue to hear student and faculty feedback. He said he still has faith in the current model and thinks it is still a better option to have compared to regular general education courses.

“So in some of the older models of gen-eds, you just take a couple of courses, and you’re done, but that doesn’t really give you an opportunity to think about how those courses might fit together within your major or extracurricular activities. You just kind of fill in a box,” DeTuri said. “Where’s the fun in that?”