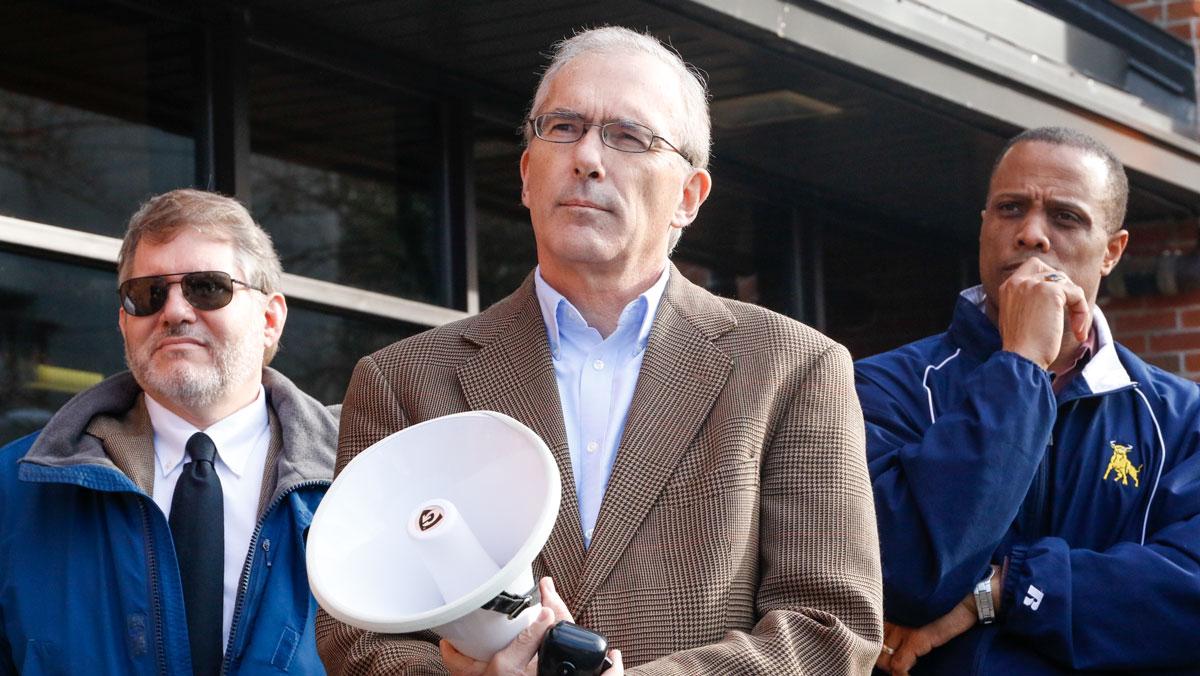 Yana Mazurkevich/The Ithacan
From left: Benjamin Rifkin, former provost and vice president for educational affairs at Ithaca College; President Tom Rochon; and Gerald Hector, former vice president for finance and administration, observe a student protest Dec. 11 at Free Speech Rock. All three administrators pictured have since announced they are stepping down from their respective positions at the college.
By Sophia Tulp — News Editor
Published: August 25, 2016

Since the highest–ranking administrator at Ithaca College, President Tom Rochon, announced in January he would step down, effective July 2017, the college’s senior leadership has seen a significant number of administrative departures, leaving the college with uncertainty about what will be accomplished throughout the remainder of his tenure.

Most significantly, Benjamin Rifkin stepped down from his position as provost and vice president for educational affairs July 31. He remains a faculty member in the Department of Modern Languages and Literatures.

Rifkin held his position for just over a year before announcing his resignation in July, but his final months were steeped in controversy.

In late April, Thomas Pfaff, former Honors Program director and professor in the Department of Mathematics, and Patricia Spencer, former faculty director for service learning in the Office of Civic Engagement and assistant professor in the Department of Writing — announced that they would step down from their administrative roles, citing a lack of support from the Office of the Provost and the president. Pfaff is stepping down from the role of Honors Program Director at the end of this semester and will remain on the faculty.

After Pfaff and Spencer made their announcements, a group of faculty and staff members presented a letter to the Ithaca College Board of Trustees, asking the board to conduct a performance review of Rifkin. The Student Government Association supported the faculty and staff’s concerns in an open letter several weeks later.

Rifkin released an announcement on Intercom on July 19 to inform the community of his resignation.

“It has been a tumultuous year, for all of us on campus,” Rifkin stated in the announcement. “During this time of transition, I have decided that it is best for me and for the college that I resume my role as a professor and contribute to the mission of the college through my work on the faculty.”

In an Aug. 19 conversation with The Ithacan, Rochon said Rifkin’s decision to resign from his administrative post was personal and that he was not asked to step down.

Between the time Pfaff and Spencer announced they would step down and the time Rifkin did so in July, multiple high-level administrators also announced their decisions to leave the college within weeks of one another.

In late May, Gerald Hector, vice president for finance and administration, announced he would leave in July 2016 to serve as the vice president for financial affairs at Cornell University. John Bradac, former Career Services director, also left the college after 27 years to assume the role of dean of student life at Tompkins Cortland Community College.

One month later, Keith McIntosh, associate vice president of Digital Instruction and Information Services and chief information officer, also announced he would be leaving the college, accepting a position at the University of Richmond in Virginia.

With interim administrators in the positions of provost and vice president for academic affairs, chief financial officer, chief information officer and ongoing searches for both a president and a chief diversity officer, members of the campus community say this amount of administrative turnover is both a concern and an opportunity heading into the 2016–17 school year.

Rochon said the leadership strategy for the college largely remains the same even with four administrators in interim positions. As announced at the All-College Meeting on Aug. 18, the largest commitments that he will pursue in his last year as president are a continued focus on shared governance and diversity and inclusion.

Rochon also said the decision-making processes at the college will remain the same. He clarified that even in a time with many interim positions, the power does not shift onto the president. Decisions continue to be a collaborative effort.

“Although we have some personnel changes, the goals remain the same,” Rochon said.

He marked three initiatives — continuations from last year — as focal points for the administration. He said the leadership will wrap up the second phases of the IC 20/20 strategic plan, maintain the financial health of the college and continue work on diversity and inclusion and shared governance.

Despite the amount of change in administrators, Rochon stressed that it is common for a leadership team to change as a president announces their departure.

“When a president announces retirement or departure, it’s just not uncommon for the leadership team to reform somewhat,” Rochon said. “The president’s team is very much connected to a particular president.”

Even with the administrative changes, the college still has numerous large-scale and ambitious initiatives up in the air — shared governance, diversity and inclusion and phase two of IC 20/20 — promises to a campus community ready for change. However, Judith McLaughlin, senior lecturer on education, faculty director of the Higher Education Program within Harvard’s Graduate School of Education and expert on higher education governance, said during years with extreme administrative turnover, it is common for major initiatives to stall.

“When a president announces that he or she is stepping down, people often talk about a lame–duck period — a period when the leader is still there but is less able to get support for initiatives because everyone thinks, ‘Well, why should I sign on for this when the president isn’t going to be here in … 12 months?’” McLaughlin said. “Typically, the lame–duck period is a … minimalist level of keeping the ship afloat and on course.”

McLaughlin said it can be more challenging for a president to push through new initiatives or form new coalitions, as members of the campus community might be worried the president’s successor could change the direction of the college. She said that this, coupled with the numerous administrative departures, could halt progress.

Pfaff, who will remain a professor of mathematics, echoed these thoughts. He said that during a time of transition, a certain amount of standstill can be expected, regardless of the institution.

“Generally speaking, whenever you are in a situation where there is transition … really, the expectation is that you tread water for a year … not really expecting new initiatives to happen, keeping the ship going in the direction that it’s been going,” he said.

Thomas Swensen, chair of the Faculty Council and professor and chair of the Department of Exercise and Sport Sciences, also said he does not expect to see new initiatives moving forward at this time, either. However, he said this should not be a large concern, as the college will continue work on the focal points from last year in the areas of diversity and inclusion and shared governance.

Rory Rothman, associate provost for student life, said he does not expect much to change for students despite the vacuum in the college leadership. He said the extracurriculars, programs, clubs, organizations and day-to-day functions of education will continue.

“Transition offers some challenges, but it also offers opportunity,” Rothman said. “I’m not saying that there might not be challenges, but I’m also saying there’s a real commitment to look forward to, in keeping our initiatives rolling.”

On the other hand, McLaughlin and other members of the campus community said this period of transition could be advantageous for attracting a new president with the benefit of hand-picking many key positions on the administration.

And while a new chapter could be on the horizon, the college still has a full year to wait before seeing these changes.

“On the negative side, it raises questions about what is going on on this campus, how deep are the issues. … On the other hand, somebody can come in here and say, ‘Aha, there is a relatively clean slate here in terms of leadership,’ McLaughlin said.